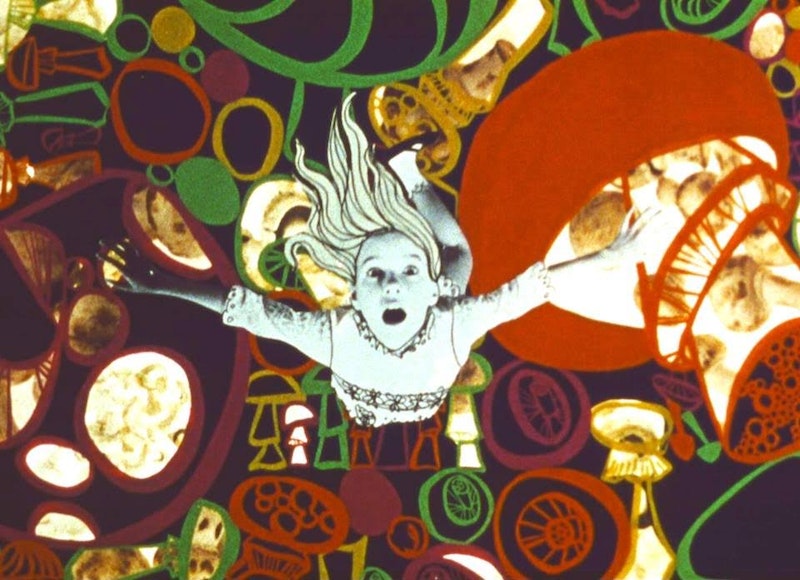 There are few things more ridiculous than the mainstream entertainment industry's emulation of counter culture, commercial follies which occur when the "square" suits of corporate America try to co-opt anything that stands as an affront to their own coldly calculated milieu.

The arcane philosophies and experiences associated with hallucinogenic drugs have inspired showbiz to unleash some of its strangest works. A concise list of awesome pre-fab drug trips could roll on for ages, but here's a good primer spotlighting three of the craziest psychsploitation extravaganzas:

The idealistic movie mogul "Lasse Braun," early sex positive feminist/performance artist Annie Sprinkle, and pioneering punk rocker Johnny Legend all got their start in America's adult film scene during the late '60s and early '70s. At this primordial stage the worlds of counterculture and adult film were so closely alligned that hippies, occult/New Age ideas, and illegal drug use were common plot elements in skin flicks. Titles like Psychedelic Sex Kicks, Acid Eaters, and Aphrodesiac! The Sexual Secret of Marijuana could be found popping up on dingey grindhouse screens just as often as the typical fare involving nurses, cheating spouses, cheerleaders, etc.

Despite boasting a screen play by one "Gertrude STEEN," mysterious auteur Donn Greer's Alice in Aicdland is mostly dull fodder for the raincoat brigade: naive suburban teen goes to college, falls in with a wild crowd, goes to a party at a hip lesbian professor's house, gets high on pot and drunk on booze, has lots of naked girl-on-girl sex, does lots of naked grinding with dudes who aren't naked, until she drops some LSD thus cuing the film's bonkers and thoroughly atypical extended climax. Electro-damaged psychedelia starts to blare over the soundtrack when Alice (Sheri Jackson, who also appeared in trashy counterculture bait like Karma Sutra '71 and The Sadistic Hypnotist) begins reciting wacky off-screen acid proclamations. Layer upon layer of pulsating multi-colored distortions mark Alice's every move as the rest of the party magically dissappears leaving her in a kaleidoscopic wonderland to dance, jump, writhe, and float away naked, free from the Earthly chains of gravity.

This rich slice of plastic "freakiness" is the only awesome part of Alice in Acidland and fortunately this bit has been preserved separately from its tepid bump 'n' grind preamble on good ol' YouTube. It's also worth noting that a few great audio clips from Alice's acid monologue can be found sampled on the excellent music compilation The Psychedelic Experience Vol. 1.

By the mid-'70s, the raggedy acid casualties of the '60s were being reborn as "back to the land" homesteaders, or cleaning up and drying out in the suburbs anonymously fading into the quiet desperation of the middle class. Some were even zooming off on a complete 180, trading modest bohemian lifestyles and anti-authoritarian outbursts for the white collar stability of the capitalist machine. For many the organic Utopia of the '60s became nothing more than an embarassing indiscretion dwarfed by shadows of discotech hedonism and post-Watergate misanthropy.

Jeff Leiberman's Blue Sunshine uses a bizarre bad acid metaphor to comment on the hippy movement's implosion. The film centers around a series of grisly murders triggered by the intense flashbacks of a handful of people who 10 years before had taken a strain of LSD called Blue Sunshine.

Even without a single trip scene, this movie is incredibly trippy: cult hero Zalman King headlines as a stoner-turned-amateur sleuth wrongly accused of one of the murders. King's performance ping pongs between cartoonish extremes of barely audible mumbling and spazzed out neurosis. There's a breathtaking synth score by veteran film composer Charles Gross, and a blur of high speed hair loss (another side effect of the killer acid) all wrapped in a menacing Twilight Zone atmosphere. Along with the infamous Altered States, Blue Sunshine endures as America's greatest psychedelic horror film.

Oh, thank heaven for poetic justice! The National Institute of Mental Health produced the single greatest example of mainstream psychedelic cinema, and maybe the world's most inept piece of anti-drug propaganda. Details about this film can be found on plenty of other blogs and websites, and words can barely describe the awesome melange of live action/animated chaos featured here, so if you haven't already seen this one head on over to the National Archives YouTube channel as soon as you can and hold on to your hat!

But if a summary is neccessary... much like the hallucinogenic experience itself, Curious Alice is a one-of-a-kind adventure into the subconsciousness where innocence, sophistication, and spirituality combine to spark a blast of frenetic weirdness.