A gross thriller and an ultimately unnecessary sequel. 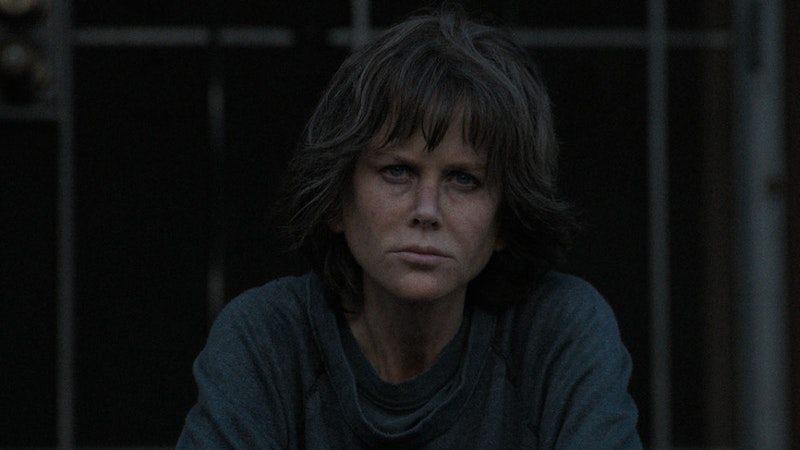 The new film Destroyer has a strong idea at its core: a cop-on-the-edge thriller, built around a character who's a drunken, broken disaster, except this time the cop is a woman instead of a man. Destroyer, however, doesn't do enough with this premise, despite solid work from Nicole Kidman in the lead. The film is plagued by bad filmmaking touches and a time-jumping structure that's unnecessary, while the plot hinges on the importance of a love story that's not compelling.

Directed by Karyn Kusama (Jennifer's Body), Destroyer is set in two time periods: in the flashbacks, cop Erin Bell (Kidman) is undercover with a gang of bank robbers, where she meets and has a romance with a fellow undercover cop (Sebastian Stan.) In the contemporary scenes, Kidman’s an alcoholic, weathered and plagued by trauma, as she struggles to relate to her teenaged daughter (Jade Pettyjohn.)

Much has been made of Kidman's appearance in the movie, where she's makeup-free and is practically unrecognizable. While it's a decent performance, and the physical transformation is impressive, it's far from Kidman's best work. I was more impressed with her, just this season, in Boy Erased, and even in Aquaman.

I'd describe the film as a gross thriller, in more ways than one, too dependent on shocking sexuality and violence. Shaky cam, extreme close-ups, unnecessary darkness, and possibly the most irritating musical score of the year plague the visual style. There's one scene I liked, with Bradley Whitford continuing his recent run of playing slimeball types, but there's nothing special about any of the flashback scenes, especially how many outstanding bank robbery and heist movies there have been of late. C-

Mary Poppins Returns is a strange, not altogether necessary sequel, with a complicated and convoluted set-up. It squeezes a tiny bit of plot into a more than two hours. It comes from a director who specializes in musicals, even though his record in making them is mixed. Its male lead is the leading musical composer of the present age, but they didn't let him write any of the original songs. Despite all that, Mary Poppins Returns is fairly enjoyable.

The film is a sequel, coming out 54 years after the first movie, but set only 25 years later. Some of the characters (the Banks children) have aged, while others (Mary Poppins) haven't. The plot, involving the Banks family needing to find a piece of paper to avoid losing their house, takes up about 15 minutes of screen time, and could’ve taken less if someone had thought to ask the one character with magical powers to look for it.

The film's musical numbers are wonderful, large-scale productions that incorporate dancing and animation. Marc Shaiman wrote them, even though Hamilton composer Lin-Manuel Miranda is on hand as the male lead, and they're the main reason to see this film. Emily Blunt steps capably into Julie Andrews' shoes in the title role, navigating the musical numbers well, even though she's not well-known for her singing. Ben Whishaw and Emily Mortimer do heartbreaking work as the grown Banks kids, while Joel Dawson, Nathanael Saleh and Pixie Davies are all good as Michael Banks' three children. However, Meryl Streep's single scene could have been dropped from the film with nothing lost.

Mary Poppins Returns was directed by Rob Marshall, who made 2002’s Chicago, and later the long-awaited adaptation of Into the Woods (also with Blunt and Streep), in 2014. He also directed Nine, Memoirs of a Geisha and one of the Pirates of the Caribbean sequels. Chicago is a Best Picture Oscar winner that's forgettable, but the only reason anyone thinks about it is because its producers also produced the Oscars a bunch of times and always found a way to sneak their own movie into all the highlight montages. Marshall's Into the Woods was hated by most who saw it, widely seen as a rare Stephen Sondheim adaptation that swung and missed.

Marshall does better this time, showing a reverence for the source material. There's also fan service for hardcore fans of the original Mary Poppins, as well as classical Disney in general. Mary Poppins Returns arrives five years after 2013's Saving Mr. Banks, a bizarre making-of movie about the original Mary Poppins that functioned as a corporate propaganda film for Disney. Its entire dramatic thrust was wrapped up in the importance of an artist (Mary Poppins author P.L. Travers) submitting to pressure from a studio boss to compromise her creative vision. It went even further in implying that the only thing that can warm the heart of a grumpy artist is a Disney movie, especially if she's talked into it by a laughably whitewashed, Tom Hanks-ified version of Walt Disney. The new film is not only much more enjoyable, but it’s nowhere near as cynical. B