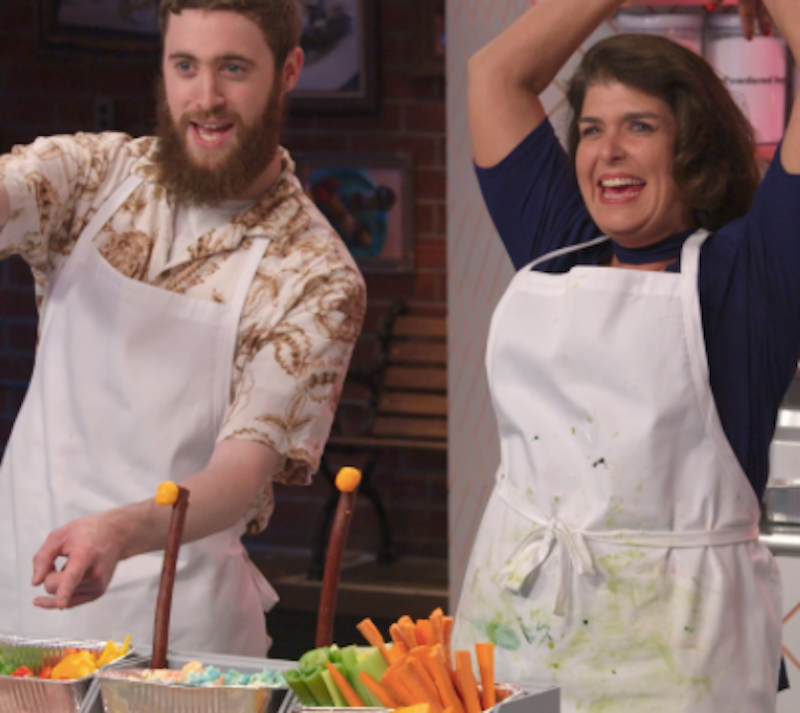 Some people will watch any reality show. My particular television preoccupation has long been any food-related show. Outside most of the dull programming that's now taken over Food Network, which showcases "personalities" like Guy Fieri (the self-described "Mayor of Flavortown"), I can't resist any of them.

I denigrate Food Network now, but it was my gateway into this fascination with culinary-themed shows back when, before it focused on housewives, it featured top chefs displaying their cooking techniques. I used to watch a lot of Molto Mario, which featured pre-cancellation Mario Batalie showcasing his formidable cooking chops. I also learned a lot watching Grillin' & Chillin' With Bobby Flay and Jack McDavid, which juxtaposed, to good effect, the uber urban Flay with good ‘ol boy McDavid. Those two taught me how to hot smoke a whole fish on a grill. What useful thing has anyone ever learned from reality TV? How to be an exhibitionist?

When I soured on Food Network, one of the shows I turned to was Bravo's Top Chef, of which I've watched seven complete seasons. All of the competitors are accomplished chefs, but only one of them will cook their way to victory. Top Chef occupies a special niche in food TV in that it's a cooking competition with a reality TV component grafted onto it. The camera follows the competitors back to their group home after the day's cooking, where sometimes they're drinking and having fun, and other times they're at each other's throats. In one of the most infamous incidents in reality TV history, a drunken competitor, Cliff Crooks, attacked another contestant, the unpopular Marcel Vigneron, and tried to forcibly shave his head while others stood by and giggled. Crooks was kicked off the show.

If you've ever cooked in a high-quality, high-volume restaurant (I have), Top Chef offers extra interest. The competitors are always under the gun, time-wise, which is how it feels every day in the kitchen as you rush to complete your extensive mise en place before "service" begins. The most intriguing element of the show was the Restaurant Wars competition in which the chefs split into two teams and were given 48 hours to create a restaurant from scratch―that includes the name, the concept, the menu, the decor, and assigning jobs in the front and back of the house. The excruciating tension this created as the clock wound down, compounded by the fact that team members often didn’t get along, was riveting to watch. When a process that usually takes from two to six months to complete is compressed into just two days, plenty of action and conflict is produced. It's a TV programmer's dream.

Food Network's Chopped is a stripped-down, one-episode version of Top Chef (which sometimes has as many as 18 episodes before the winner is chosen) with a twist thrown in. The chef/competitors are given baskets of mystery ingredients from which they have 20-30 minutes to conceive and execute an appetizer, a main course, and a dessert. The curveball is that the ingredients are often weird and incongruous. Here's the dessert basket one group of competitors once got: turkey ice cream cake, mashed potato candy, cranberry salsa, and green bean ice pops. Ask yourself what you'd make with that. Probably nothing palatable, but Chopped chefs often do a remarkable job. Watching Chopped has taught me how to be creative in the kitchen with the ingredients I have at hand.

There's also the TV format of bringing a successful chef in to turn around a failing restaurant. The top shows in this category are Gordon Ramsay's Kitchen Nightmares and Kitchen Impossible, starring chef Robert Irvine. Ramsay brings his familiar badass, in-your-face persona to the failing places, while Irvine is a gentler presence who relies on persuasion over bullying. The owners, some of whom are on the verge of losing their homes, often still show remarkable stubbornness in clinging to the outdated ideas that are about to ruin them. It's a puzzling defiance, especially since playing along means their restaurants will be given a complete physical makeover and a new menu designed by one of the top people in the field. But it's this self-defeating resistance that provides the dramatic tension.

The harder the owner fights, the more interesting the show is. Ramsey ramps up the emotions when he does things like telling a chef that one of his signature dishes looks like something you'd find in a baby's diaper.

The most satisfying aspect of these restaurant-rescue shows is watching Ramsay or Irvine turn a restaurant around one step at a time. When the menu is redone and the staff get to try the new dishes, their appreciative smiles are heartwarming. You can feel their hope. And it gets emotional when the owners and staff are finally allowed to look at their restaurant’s new makeover for the first time. There’s real pathos in the tears they shed when they see a future that they’d nearly given up on.

Finally, there's the culinary travel show that the late Anthony Bourdain was the master of. These programs hit the sweet spot for fans of both vicarious dining and vicarious travel. Bourdain, a man of infectious curiosity, sought out the humble purveyors of good food at various outposts of the globe on his various shows on different networks over the years. He was more interested in showing the humanity of the people we don't hear much about than wallowing in luxury, and that's what gave his shows universal appeal well beyond the realm of the foodie world. Bourdain was merely a competent chef when he worked in kitchens, but he was always a terrific storyteller and writer. The voiceovers he wrote for his shows, delivered in that effortlessly cool cadence, lent the work a literary quality that no culinary show has ever even aspired to.