Abel Ferrara’s Tommaso is a study in cluelessness, something I don't need from a movie. D 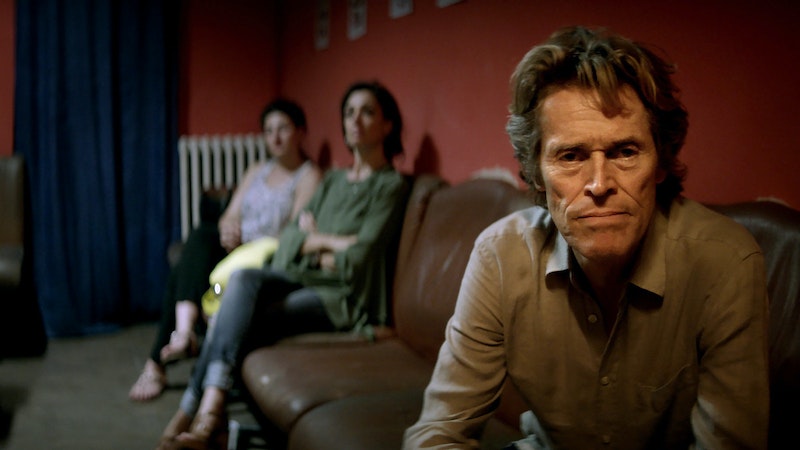 In an important way, Abel Ferrara’s Tommaso is heir to films like The Tree of Life and basically everything else by Terence Malick, where a sleazy and disappointing story is partly redeemed by a religious subtext about a greater reality. If you’ve seen The Tree of Life, you’ll remember the weird contrast created by Brad Pitt’s abusive fathering scenes and the mystical counterpoint about the origins of life, the universe, and everything. If you’ve seen Bad Lieutenant, Ferrara’s only blockbuster, then you remember the Christian story about a very bad man who has very real encounters with the only person who could possibly forgive him—Jesus. Tommaso is like that. At one point, in an internal monologue that seems to come out of Tommaso’s in-progress screenplay, Willem Dafoe narrates the idea that “everything that exists” can give “pleasure... in the mind.” Such a philosophy partially justifies the idea that film is a verite collection of moments. When we’re watching a child eating raspberry gelato, we don’t have to know what the film “means” or where it intends to go. The moment is enough; it gives pleasure in the mind.

But the ratio of the sleazy to the mystical, the mundane to the magical, still has to be maintained. It’s not enough to cover everything in sepia; there has to be a larger point to the individual scenes, and to their content, above and beyond the fact that it’s nice to look at them in a dopey, “Sunday afternoon at the museum” kind of way. This is where Tommaso really fails. The only point of the film, if you bottom-line it in a detached way, is that it’s difficult to be an old man with a young wife, a young kid, and a lot of horny longings, and that if you are such, living in a beautiful city full of young pretty women, you’re likely to self-destruct. I could detach from the film even further and talk about the fact that it’s a spectacular ode to the problems of people who don’t have any real problems. Tommaso gets to make the movies he wants, he gets to live a sober second life after ruining his first life, he has enough money to live like a yuppie in Italy, and has plenty of attractive romantic opportunities. Within that framework, the amount of trouble he manages to cause for himself is genuinely impressive.

Plenty of films deserve more than to be kicked back to the shelf with a sticker reading “First World Problems.” If First World problems didn’t exist, or didn’t contain stories worth telling, we’d have no Birdman and no films like The Royal Tenenbaums. So I’m not going to dismiss Tommaso is such a cursory way. There are a lot of moments that are worth watching here, including believable flirtations, joyful scenes of everyday life, and painful revelations about couples that aren’t meant to last forever. Tommaso’s girlfriend (wife maybe?) is a particularly convincing character because she’s shallow and inarticulate. At one point, she dances around the room with Tommaso’s daughter, listening to the Russian version of America’s Got Talent. The performer is making techno music with a jaw harp. It’s as fun, and as stupid, as it appears to be, and Tommaso’s willingness to go along with it has a perfect edge of masochistic Other-worship: his partner is clearly supposed to represent, and to provide, the “life-force” that’s waning in him. That’s not something another person can do for you forever, and the film knows it. By the time we’re two-thirds into the drama, this would-be muse and feminine savior is announcing that she wants to do what she wants to do, when she wants to do it, and we’re as disappointed in her as Tommaso, even as her believability is increasing by leaps and bounds.

This film breaks significant dramatic rules that have been around since Aristotle’s time. It goes into and out of Tommaso’s fantasies, blurring our ability to distinguish what is real from what isn’t. I’d herald this as a major postmodern achievement were it not for the fact that what goes on in Tommaso’s head is so stupid, and so flat compared to the film’s overall mood of realism, that we can basically guess where his fantasies begin based on whether or not what we’re seeing makes us want to yell at the screen.

For example, if you’ve ever had a cute barista serve you a cup of coffee, you’ve probably imagined that same barista naked, in an empty coffeehouse, letting you fondle him/her as you sip espresso. (If not, you’re either a very moral person, not suffering from scopophilia, or going to the wrong coffeehouses.) Tommaso has these exact fantasies, and we watch them in an absurdly unedited form, as though we’ve learned something important when they’re finished. In fact, to quote Wayne’s World, we’ve merely “learned that a flawless profile, a perfect body, the right clothes, and a great car can get you far in America, almost to the top, but it can't get you everything.” That’s right—no matter how young your wife is, and how nice it is to cook pasta al dente with her, you’ll still be a philandering old lecher at heart, and possibly also a free bird who can’t change, if that’s the way you’re made. Unfortunately, inevitably, this revelation makes us care for Tommaso a whole lot less, which is bad news in a film named after him where our assessment of his relationship depends on our basic ability to like him.

I’m not going to reveal what happens in the shocking (!) final scenes of the film, because that’d cheat you out of a cinematic experience you’re probably never going to have anyway. So let’s end by talking about the universe. I can take away certain kinds of mystical feelings from this film, which includes scenes of universes dancing with each other. But I’ve got a hundred films that can give me that Tommaso feeling. If I want to learn about the relationship between “control” and “abandon” in a performance—the theme of one of Tommaso’s acting classes—I can watch Black Swan. If I want mystical mumbo-jumbo, I can watch The Thin Red Line, or can just look up (again) that wonderful Isaac Newton quote: “I do not know what I may appear to the world, but to myself I seem to have been only like a boy playing on the sea-shore, and diverting myself in now and then finding a smoother pebble or a prettier shell than ordinary, whilst the great ocean of truth lay all undiscovered before me.”

That gives me chills, because I think of Newton as somebody who actually did have the great ocean of truth in sight. Ferrara, on the other hand, strikes me as somebody who’s merely heard about it on good authority. And his latest bad lieutenant doesn’t know much more than when not to buy the radicchio. As a filmmaker, his problem is that I can, and do, achieve that kind of cluelessness daily, without any help from a movie.