The King of Staten Island is a decent vehicle for Pete Davidson by Judd Apatow. B- 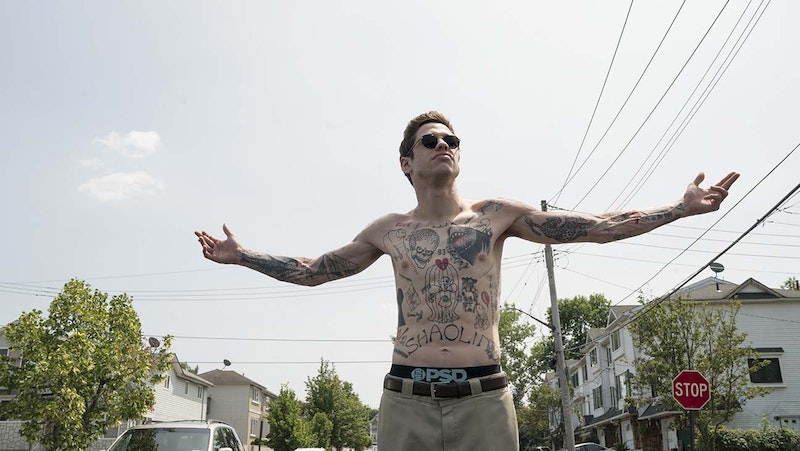 With The King of Staten Island, director Judd Apatow weds his usual comedic formula to the star and origin story of Saturday Night Live comedian Pete Davidson. Davidson shows enough charisma and presence to carry the movie, but the Apatow formula is wearing thin. Also, the script isn't especially funny, nor does the film allow Davidson to do most of what he's good at. And like much of the Apatow filmography, The King of Staten Island, at 136 minutes, is about a half hour too long.

The Pete Davidson story is widely known at this point. A Staten Island native whose father was killed in the 9/11 attacks, when Davidson was just seven, he joined SNL at age 20, contributing a chaotic energy that's mostly at odds with how the show has operated for most of that time. Davidson has also made frequent news for his romances—most notably with Ariana Grande—and his battles with drug addiction, mental illness, and one public suicide attempt, all of which he's addressed in frequent Weekend Update monologues.

Apatow's movie is based on a version of Davidson's life that keeps the tragic back story of the dead father, depression and drug use, but subtracts the part where he became an actor and comedian, got famous at age 20, and dated starlets. Instead, Davidson's character remains a Staten Island stoner layabout approaching his late-20s, still depressed due to unresolved grief over his father's death, while his greatest ambition is to become a tattoo artist.

Much of The King of Staten Island is a hangout movie, with Davidson's Scott Carlin getting into various plotless adventures with his friends (led by the appealing former Disney Channel actor Moises Arias.) The plot finally gets going when his mom (Marisa Tomei) starts dating a firefighter (comedian Bill Burr), leading Davidson to begin spending time with a group of older firemen (including real-life ex-fireman Steve Buscemi), who both instill a sense of purpose and help him come to terms with his father's death. It's the story of an immature protagonist, who gradually summons the will to get his shit together, at least enough to get his professional life in order and finally commit to a monogamous relationship.

If that sounds familiar, it's because Judd Apatow has gone to this particular well many times before, with The 40 Year-Old-Virgin, Knocked Up, Funny People and Trainwreck, all of which also starred a lead actor who was stepping into movie stardom for the first time. And like those movies, The King of Staten Island combines raunch and sexuality with overarching values that are traditional and conservative: Scott needs to be around the firemen to learn how to become a real man and t embrace maturity.

There are some differences from the older movies. This film gets a little bit heavier, as it deals with the character's mental illness, and it's about a working class protagonist, which is also a departure (see the director's This is 40, in which Paul Rudd and Leslie Mann dealt with "financial woes" while living in a massive mansion.) But overall, it's the same general outline, except there are considerably fewer laughs.

The cast is strong top to bottom. Davidson is a charismatic lead actor who appears to have a future in movies, while Bel Powley, the English actress best known for The Diary of a Teenage Girl, just about walks away with the movie as a love interest, who puts on a flawless Staten Island accent. With Tomei, Davidson has the same outer-borough mother figure as Spider-man—while the director's daughter Maude Apatow plays Davidson’s sister, having stated very unconvincingly that she was required to audition for the role. The great Pamela Adlon has a small bit as Burr's ex-wife. And Burr's character, despite being a Staten Island firefighter, is nevertheless from Boston and a vocal hater of the Yankees. Burr must have that in his contract rider at this point.

While The King of Staten Island isn’t great, Davidson will likely have more movie star staying power than Amy Schumer, who never starred in another good movie after Apatow's Trainwreck.