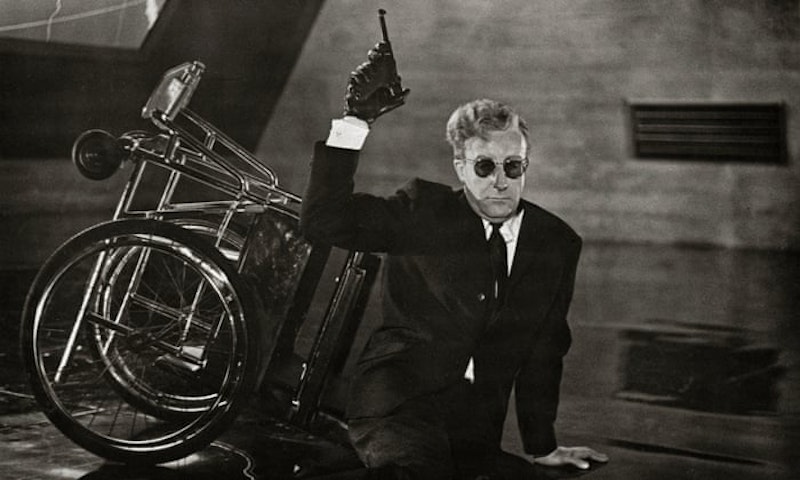 Time’s a remorseless critic. Stanley Kubrick’s Dr. Strangelove or: How I Learned to Stop Worrying and Love the Bomb came out in late January of 1964, Sidney Lumet’s Fail Safe only a few months later. Movies about nuclear apocalypse with strikingly similar storylines, Kubrick’s film has lasted in a way that Lumet’s hasn’t. Fail Safe is a principled, atmospheric work. But we’ve learned about living in the shadow of apocalypse over the last few decades, threatened by bombs and environmental collapse and, now, plague; we’ve learned that Strangelove gets the tone right in a way Lumet’s film doesn’t.

Kubrick wanted to make a film about nuclear war in the early-1960s, and bought the film rights to Peter George’s 1958 novel Red Alert. Then, during the Cuban missile crisis in October of 1962, Eugene Burdick and Harvey Wheeler serialized Fail Safe in three issues of the Saturday Evening Post and Lumet began making it into a movie. Kubrick, getting wind of the production, launched a lawsuit with Peter George against Burdick and Wheeler, alleging plagiarism.

The case was settled out of court, and one aspect of the settlement was that Columbia, which was releasing Strangelove, would get the rights to release the film of Fail Safe—after Strangelove. By this time Kubrick had decided to play George’s thriller as a pitch-black satire, while Fail Safe was handling its thriller plot straight. The upshot of the lawsuit was that the satire came out before what it satirized, and that didn’t do Fail Safe any favors.

Both stories run as follows: American nuclear bombers, kept constantly flying just outside Russian airspace, get orders to bomb the USSR and trigger World War III. In Fail Safe, the orders come from a mechanical failure after a false alarm; in Strangelove from the commander of an Air Force base who’s gone mad. A frantic American president tries to call the bombers back without success, and reaches out to the Soviet Union while advisors and military men advocate taking advantage of the failure to launch a full-scale pre-emptive strike.

On its own terms, Fail Safe is a tense, well-directed thriller. Much of the action takes place among groups of men in small rooms, sometimes staring at large screens showing the location of airplanes and missiles. Lumet shows what he learned on 12 Angry Men about handling actors and the camera in claustrophobic spaces. And he does new things, with lighting so extreme that the frequent close-ups take on a nightmare feel.

Walter Matthau as a pro-war intellectual has an unexpectedly threatening presence, jowly and Nixonian. Henry Fonda gives a nuanced performance as the President: descending into the White House bunker under the shadow of apocalypse, he reflects that “we’re deep enough, maybe this is hell,” making subtext text. He’s accompanied by a government translator, played by Larry Hagman, who with Fonda creates one of the most effective scenes of the movie: a phone call between the President and the Soviet Premier, shown in a single long take of the two actors.

As it happens, a lesser President recently cowered in the real White House bunker in the face of a mass protest. This contrast of reality and fiction points up one of the big issues with Fail Safe: it’s idealistic in an early-1960s way, a well-crafted example of a certain kind of liberal faith in the dignity of humanity. Strangelove has less truck with that, and ends up a better movie.

Kubrick was the one creator to have the idea of telling the story of accidental nuclear war as satire, and that’s the sort of insight that distinguishes the top-flight artist. His way of approaching the story, his treatment of the basic idea, is more bitter but more credible than Fail Safe. It’s a living document in a way Lumet’s film is not. Watch the two movies and you realize that satire’s truer to what we now know about the way power is exercised. Henry Fonda’s a legitimate icon, but Kubrick’s bumbling, exasperated President is more real.

Strangelove’s President is one of three roles played by Peter Sellers. If Fonda’s instantly-recognizable old-time Hollywood royalty, Sellers is a chameleon, and that slipperiness perfectly fits into a story about politics. And he’s still almost outdone by the performance Kubrick extracts from George C. Scott, playing the hawkish General Buck Turgidson. The generals of Fail Safe are responsible men burdened by the weight of their jobs; Scott’s Turgidson is a much more accurate portrait of 1960s Pentagon warmongers like Curtis LeMay.

But Sellers also plays the title role in Strangelove, the German intellectual who slowly emerges over the course of the film, proclaiming lunatic theories about surviving nuclear war. He’s the equivalent of Matthau’s character in Fail Safe, both inspired by Herman Kahn but both seeming to anticipate the career of Henry Kissinger. Sellers plays him as a Nazi, a fanatic, aroused by the thought of mega-deaths. Stranglove’s belief in survival of the fittest, with him as ineluctably one of the fit, still feels familiar: you can imagine him today tweeting that the economy should be re-opened at once, never mind the pandemic.

Both movies see the planes drop their bombs (with or without Slim Pickens). In Strangelove, the explosion triggers a Russian doomsday device that annihilates the world. In Fail Safe, there’s a twist ending straight out of The Twilight Zone: the American President orders the destruction of New York to prove to the Russians that the destruction of Moscow was an accident.

It’s handled well cinematically, but it’s impossible to believe. Fail Safe had to have an ending showing the surreal horror of nuclear strategy while also feeling like something that could really happen, and this is contradictory. The problem with the ending is the problem with Fail Safe: it’s trying to tell a sober, balanced story about a subject that’s inherently unbalanced. The policy of mutually assured destruction needs to be treated satirically because it’s irrational. Strangelove does that, and does it well, succeeding in ways Fail Safe can’t imagine.

It’s too bad that Fail Safe, a good movie, is so overshadowed. But overshadowed it is. You can’t watch it without thinking of Strangelove, while the reverse isn’t true. Fail Safe spoke to its time. Strangelove is more timeless about the nature of power.