Abel Ferrara’s Tommaso is a striking piece of self-reflection full of grace. A- 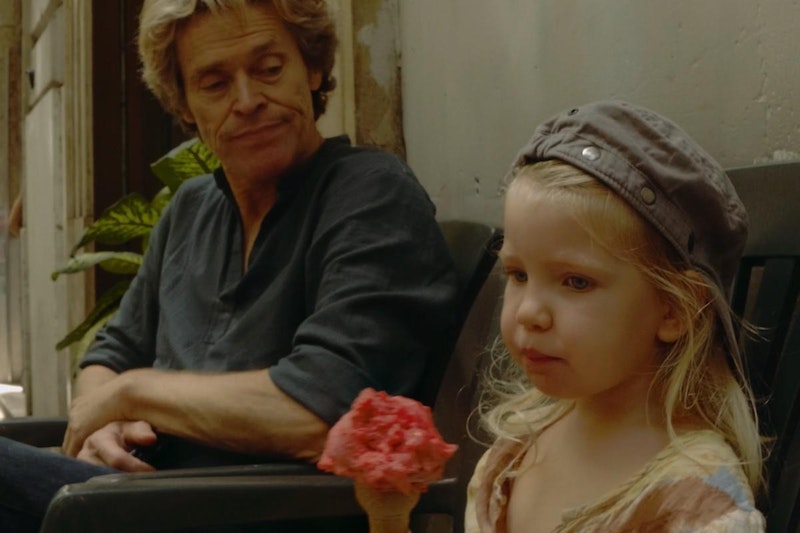 Abel Ferrara’s film Tommaso premiered last year at Cannes and is just now, over a year later, being distributed via virtual cinemas by Kino Lorber (you can rent the film here to support The Senator Theatre). It stars Willem Dafoe as the title character, an American screenwriter living in Rome with his two-year-old daughter Anna and her 29-year-old mother Nikki. They have a nice apartment, a stable routine, a good life: Tommaso is taking Italian lessons, teaching acting classes, at work on his new snowbound screenplay, and diligent about attending Al-Anon meetings. This is where we learn the most about Tomasso.

The vague contours of Tommaso’s past and occupation obviously resemble Ferrara’s: current ex-pat, former crack addict who lost it on a movie set in Miami. Tommaso’s daughter Deedee is played by Ferrara’s daughter Anna, and his wife Nikki by Cristina Chiriac, Ferrara’s wife. Tommaso is an unassuming film, one without a script that doesn’t need one. It’s a powerful and calming humanist daydream in wealthy-ish Rome, a distant relative of the dialysis-core pox. There’s good food and even better conversation here, but none of the inanities of Paris Can Wait or The Leisure Seeker, cancers I think about whenever I see famous people cooking in beautiful apartments.

Tommaso takes a hard turn from mellow observation to violent fantasy in the last 20 minutes, and it’s abrasive and shocking until the ending—Tommaso relapses, Nikki sees him throwing away “evidence” in a trash can outside their apartment, she runs and he loses it and starts screaming at them and threatening her. When he’s finally able to get into the apartment, he pulls a gun out of a drawer, goes into his bedroom, sees his girlfriend with some dude around her age, and Tommaso shoots him in the chest. Colors are pumped and exaggerated at times during their confrontation, and it isn’t until the very end that Ferrara makes it clear that it’s possible that this was a “dream,” or whatever you want to call it.

These are exorcisms, and it’s as happy ending for the guy that made Bad Lieutenant 27 years ago. No more ambling naked and crying in front of mirrors, just occasional stabs of madness to remind you of everything you carry. Not dead weight, unexploded ordinance—in a scene toward the middle of the film, Tommaso confronts a homeless Pakistani man singing and screaming outside of his apartment (“You’re scaring my daughter!”). Dafoe is extraordinary as always, and it feels superfluous even commenting on it, because there are only so many times you can write or hear “career best” and wonder if anything comes in between that and the obituaries.

He tells this Pakistani guy to go fuck himself, go drink somewhere else, you’re disturbing my family. But they calm down, realizing how much they can communicate without many words. God knows the drunk Pakistani guy is having a better time and is more well-adjusted than all that’s dwelling in the rims of Tommaso’s skull. But the film largely isn’t dark or morose or pessimistic—it’s a leisurely movie that for once feels substantive. He goes to Al-Anon, he hangs out with his family, he goes out as a student, as a teacher, and he works on his new movie set in the tundra (Ferrara’s Siberia, out sometime this year).

The film’s a loose thread, and it’s shot with a similar skilled abandon by cinematographer Peter Zeitlinger. Tommaso is shot in widescreen anamorphic format, yet so much of the film the camera is moving or roving or peering around corners, getting up in peoples’ faces. There are similarities to Terrence Malick’s “dog’s eye” style, but don’t get me wrong, Tommaso is actually a good movie, unlike anything Malick has ever done. Zeitlinger follows Tommaso, Nikki, and Anna like a curious pet, and the effect is exaggerated by the anamorphic warping usually hidden by other filmmakers: often we see Tommaso framed by doorways and vestibules, whose edges are curved like a snow globe.

On its face, the intimacy and intentional “minor” aim of this film is at odds with its format: this isn’t a “widescreen story.” It’s small, thoughtful and not really interested in breaking through to anyone who isn’t paying attention or even to those watching it who may be bored or befuddled by the sudden tonal shift in the last 20 minutes. Ferrara is working out here, in his studio, performing more exorcisms. A filmmaker as intense and interesting as Ferrara has to try really hard to make something totally uninteresting, and remember, this is a guy that made at least a movie every year as a hardcore crack addict and alcoholic. The grace of this film can only come from someone who has seen and scraped the bottom of life’s barrel.