The Room is just one example. 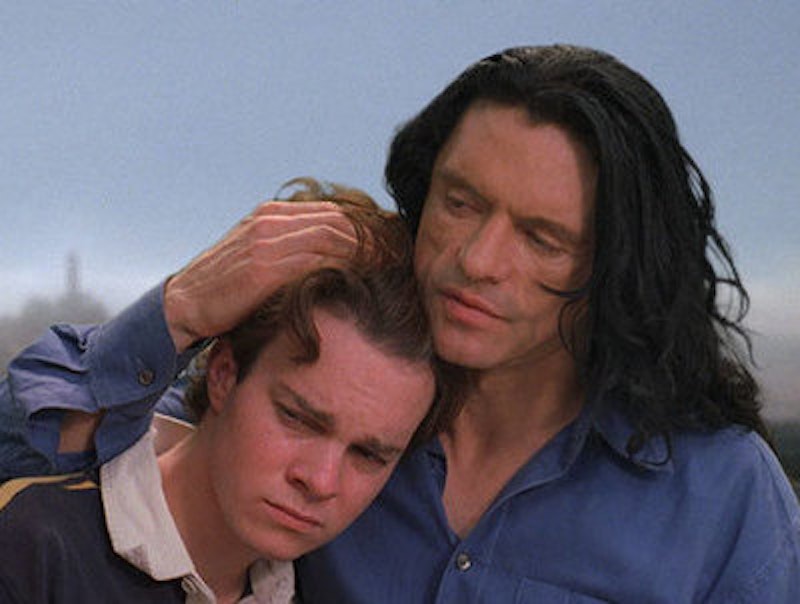 I love bad movies, which isn’t uncommon. Bad movie discussion has become something of a cottage industry over the past 10-15 years, to the point where I’d consider it a social phenomenon. The Internet is bursting with bad movie podcasts, and venues across the country (including upscale and/or specialty movie theaters) have Bad Movie Nights where patrons can heckle and wisecrack.

This isn't wrong, by any means, but it does indicate a growing national appetite (and tolerance) for bad movies that extends beyond the stereotypical weirdos and nerds, the sole fan base for decades. Why do we do it?

A movie typically described as “so bad it's good” (The Rocky Horror Picture Show, for example) is still lively and energetic enough to be fun without suffering the editorial constraints or self-seriousness of “legitimate” film. And over time, more than a few “B-movies,” typically short genre films originally distributed as the ass-end of a double feature, have received critical acceptance in retrospect.

But none of that explains the popularity of, say, Tommy Wiseau's 2003 film The Room, a movie that absolutely no one likes (not even ironically), or even attempts to defend. The Room is supposed to be a romantic drama, but the numerous faults of the script (which was originally 600 pages long), acting, and direction made it an unintentional black comedy. Watching it is painful, even for people who find humor in its flaws, so the only interaction between The Room and its audience is loud, ruthless mockery. And yet, it became an unlikely pop culture sensation that somewhat justified Wiseau's unwavering belief in his abilities.

The Room is also a window into a strange pocket of film obsessives who spend a lot of time earnestly watching movies they hate, just to make fun of them. I am a regular attendee of Mondo Baltimore, a monthly film series whose selections are drawn from the straight-to-VHS dark ages of the late-1980s and early-90s for exactly this reason. None of them have been good. And yet, dozens of us show up every month to drink and vent our frustration at these films, in an act of cultural masochism that I’m at a loss to explain.

Thankfully, I'm not the only one who questions this behavior. Media sources like Reel Fanatics and The Deseret News National point to irony and nostalgia as key factors in why people flock to bad movies. They mention the now-defunct video store culture that shelved bad movies next to good ones, the alluring irreverence of Mystery Science Theater 3000, whose running commentary recast bad films as comedies, and a growing appreciation for camp that encourages people to seek out bad movies for fun, both online and on TV.

That makes sense up to a point, but I don't really buy it. When the SyFy premiere of Sharknado draws nearly as many viewers as the final episode of Breaking Bad (which it did), something bigger than irony has taken hold of us.

Two opinion pieces in the Huffington Post, meanwhile, suggest that bad movie engagement is part of the eternal grapple between high and low art, and that bad movies are a way to shut out brains off and/or simplify our own responses to the big, scary questions of our lives. It's true that bad movies are often pretty easy to understand, but so is Hollywood's endless supply of superhero franchise films. Those questions are already addressed by films that may not be great, but don't inspire the kind of vicious response that The Room does. Unsure of where else to look for answers, I reached out to members of Baltimore's creative community, hoping they had more relevant insights.

Melissa LaMartina, who played Riley in the 2014 Lovecraft-inspired horror-comedy Call Girl of Cthulhu, thinks that superiority, rather than irony, has a lot to do with bad movie engagement. “One of the things about the question of bad movies,” LaMartina said via email, “is that many people really want to feel smarter than whatever media they are consuming.” Put that way, it almost sounds like a desperate act; since we can't escape pop cultural hegemony, we must settle for outsmarting it.

LaMartina also senses a certain cattiness about the modern dialogue surrounding bad movies. “Being mean-spirited just for the sake of feeling superior,” is how she described it, especially when the targeted movies are low-budget, and pointed out the How Did This Get Made? podcast as an example. Still, she ultimately recognizes it as a bonding experience, saying, “Joking from the audience of a movie is pretty low stakes, and that's attractive to people.”

It's worth noting that a lot of bad movie enthusiasts are artists themselves, and many are interested in filmmaking. After talking with Melissa, I considered that the cruel tone of bad movie discussion is giving voice to specific anxieties, namely that no creative work is perfect, that it can be bad despite the creator's efforts, and that gathering up the nerve to make public art is hard. Mocking the creative work of others is much easier, particularly when it's done out of fear rather than plain malignancy.

John Bennett, a local actor and comedian who hosts the Mondo Baltimore events as “Dr. Acula,” agrees that fear is a factor, but in a grander sense. “I think watching unwanted VHS crap is a way to avoid the big fear of being homogenized in a sense,” he said via email. “As Netflix and these online media libraries slowly replace the physical ones as a tangible option for a Saturday night binge, there is a little anarchic voice in the back of our heads that wants to 'break' the algorithm and find something that… wouldn’t on its best day pass a marketer’s desk or unite a focus group. We want a spark of good old American madness.”

John's comments intersect with the central thesis of a 2015 Guardian article about bad movies, which lamented that bad films were “cast out into the Netflix darkness” and forgotten instead of pilloried via widespread theatrical release. The article suggests that when bad movies share the same space as good ones, the audience is better able to determine where their tastes lie. Clearly, The Guardian underestimates how willing people are to seek out bad movies, but it's an interesting point nonetheless.

John echoed Melissa's observations about audiences wanting to feel superior to bad films, while at the same time drawing inspiration from them. Creative people who watch bad movies, according to John, share that same “fear in the dark that, try as they might, they might always be just another guy going to his khaki job, driving the gray sedan and kissing his Styrofoam wife. But these losers who caught their struggle on VHS tape… reached for the stars and weren’t going to let bad dialogue, worse acting, and dumb props keep them from giving their all.”

I thought about John's response for a couple of days, and considered my own reasons for liking bad movies. First, I'm an asshole child of the 1990s who sees obscurity as a virtue more often than I should, and up until fairly recently bad movies were obscure by default. But John's words struck a chord. I really do admire the pure force of will required to make bad movies. I like big-budget Hollywood films too, but those are made by huge studios with access to the best talent, crew, and equipment. These resources can get in the way of making a good movie, as we've all seen, but the odds of cinematic brilliance are still in their favor, given the vast resources at their disposal.

Bad movies, on the other hand, have to rely on who's around. Often, this means working with people at both the dawn and dusk of their careers, as well as people too weird or untalented to move beyond this level of filmmaking, and no shortage of passionate/deluded amateurs. That they even try to build anything from that scrap heap is remarkable because, unlike A-list films, you can actually see them try. Project: Kill, for example, is a mid-70s kung-fu action film starring—bear in mind that it was not a comedy—Leslie Nielsen, before the Zucker Bros. resurrected his career. The strange casting, uneven script, and awkward fight choreography are enough to sink this movie, and the mysterious death of its intended distributor meant that no one even saw it until the 80s. Needless to say, I own it on DVD and push it on everyone I know.

In a media landscape that suffocates us with slick production values and homogeneous displays of talent, and with technology making it easier to seem talented with minimal sacrifice, it's a wonder that bad movies can exist at all. In a way, it's a relief. The appeal of watching people try to make a good, or at least watchable, movie with none of their inspirations' advantages should be obvious; it's an underdog story.

Granted, some people just want to have dumb fun with their friends, and engage with this stuff on a fairly superficial level. But the increased viewership of bad movies, the speculation of how they get made, and the discussion of what makes them so bad, comes from the audience's fear that they'll never chase their own dreams, and the hope that someday they will. After all, if the guys who made The Room could see that piece of crap through to the end, why can't the rest of us?