Multiple Versions of You, All at Once 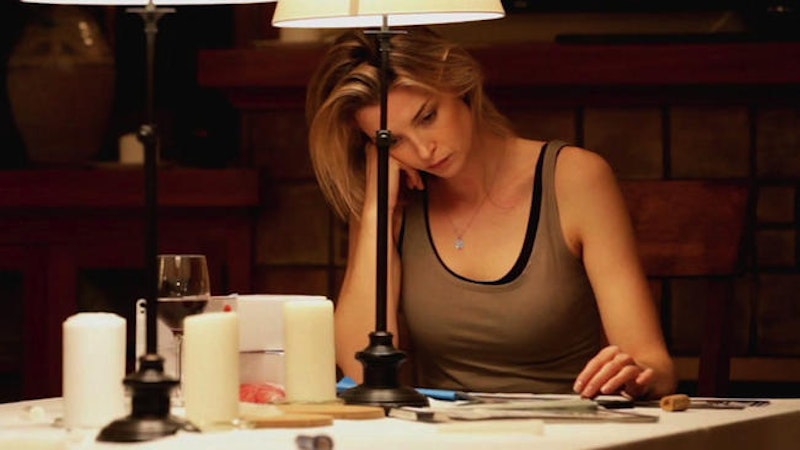 The first 15 minutes of Coherence will be familiar—even picayune—to viewers of a certain age and demographic: three couples gather at the home of a fourth for a dinner party. They’re old friends, mostly, with various peccadilloes, disappointments, and tics. Tensions bubble just under the surface, but those are muted. Talk small, awkward and affectionate is exchanged, and there’s a distinct pleasure in how eager and willing everyone is to prop one another up. It’s been so long since they’ve all been able to get together like this, and one can imagine a version of this gathering that peaks with light hilarity and concludes with a handful of light hangovers. No harm, no foul—just some tight bros and sisters from way back minting some fresh memories. That isn’t how things shake out, because a comet’s rotation is bringing it near to Earth, and strange things start to happen. Cell phone screens crack; Internet service dies; the power goes out.

The lack of interconnectivity presents a problem that ignites the plot, as one husband wants to call his brother, a physicist; the brother asked him to call if anything “strange” happened that night. So the husband and a male friend set out for the only visible house that seems to have power. Soon there is a loud thump outside, followed later by the return of the departing pair, who have a locked steel box; one of the men has a head wound he doesn’t explain. The box contains numbered photos of everyone at the party and a ping-pong paddle.

Coherence is a movie about friends at a party who discover that they are, temporarily, at the nexus of myriad alternate-reality versions of that very same party. That’s not really a spoiler, since writer/director James Ward Byrkit juggles this premise so expertly that the excitement of experience lies in watching how the premise develops. The further one drifts into its depths, the more likely it is that Coherence will demand a second, third, or fourth viewing to tie up all the loose ends; it’s a lot like Looper, Primer, and Predestination in that sense.

The greatest magic trick Byrkit pulls is to flip the tony warmth of a suburban ranch home into something terse, strained, and penitentiary-like. The idea of actually going outside strikes fear into the hearts of everyone. Alcohol, initially a party lubricant, becomes a medicating agent for the revelers once they’ve come to grips with the sci-fi uniqueness of their predicament, and early breadcrumbs that might not matter much in a more conventional movie—one character was seriously involved with another, one character brought along a homemade narcotic—emerge as hugely significant. A bizarre Amazing Race vibe predominates eventually, secrets explode, and tension pulses wildly in even the most placid scenes. My favorite moment arrives close to the end, when Emily (Emily Baldoni)—the first character we meet and the movie’s focal point—languidly wanders out of and away from the house, into multi-versal badlands that may or may not hold something special for her.