A new study of the Nat Turner rebellion doesn't fit into film clichés. 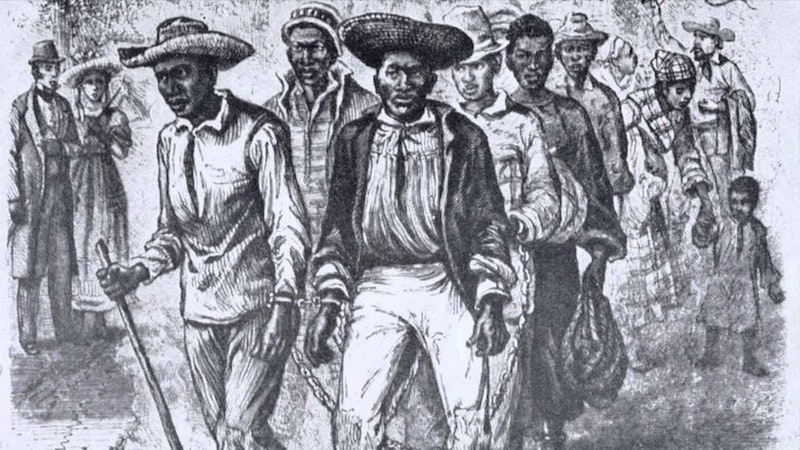 Next year, director Nate Parker is set to release The Birth of a Nation, a film about the 1831 Nat Turner rebellion in Southampton County, Virginia. The film has been a long time coming. There have been numerous fictional retellings of the revolt—most notably William Styron's controversial 1967 Pulitzer Prize-winning novel The Confessions of Nat Turner. But Hollywood’s never before taken up the story. And reading Patrick Breen's new study of the rebellion, The Land Shall Be Deluged in Blood, it's easy to see why.

On the surface, it seems like there'd be a lot for Hollywood to like in the Nat Turner story. The revolt was violent (always an attraction for big-budget film). Turner's small force, numbering probably only 50 or so, killed 60 white men, women and children before the revolt was put down. Turner escaped, hiding out for months, before he was captured. In his cell he dictated a confession, before a court condemned him to death.

But while there's certainly drama in Turner's rebellion, that doesn't fit easily into Hollywood's formula for slave films of the last few decades, such as 12 Years a Slave (2013), Django Unchained (2012), Lincoln, (2012), Amistad (1997), or Glory (1989). All of these films provide heroism, uplift, and a vision of at least partial racial reconciliation. The Nat Turner revolt, in Breen's meticulous account, offers none of this.

Breen's book is devoid of heroes. Turner was not especially inspiring. Most slaves who knew him seem to have taken his religious visions with a grain of salt, especially after one incident in which he ran away, made good his escape—and then returned because, he said, God told him to. Hollywood protagonists like Django or Solomon Northrup are unambiguously opposed to slavery from beginning to end. Turner, though, was conflicted.

That was the case for many others in Southampton, Virginia as well. Most slaves didn't think that God cosigned bondage. But neither were they committed to revolt. "The majority of slaves in Southampton did not get involved" in the uprising, Breen writes. Some believed (with good reason) that the rebellion would fail, and leave them worse off than they started—“It is really hard for a slave revolt to succeed," as Breen points out. A small number of slaves even tried to save whites, hiding them from the rebels, or even in a few cases taking up arms to protect them.

Turner's choice of targets may have led some slaves to defend whites. The rebels were determined to spare no one, and as a result a number of their victims were women and children. Turner believed that killing whites would help rally slaves to his cause quickly. This was a vital necessity, since he started with only a handful of conspirators. He didn’t want to spread word of the rebellion before it actually began for fear of betrayal (a major problem for earlier slave revolts).

The prospect of shedding blood did draw some slaves to the cause. But killing children may have alienated others. And in terms of heroism, there's a big gap between, say, Glory, with black troops nobly advancing under fire, and a roving band sneaking into houses in the dark and killing 10-year-olds in their sleep. When Turner's band finally encountered prepared, armed white troops, the rebellion collapsed almost instantly.

Even for contemporary blacks, then, Turner's rebellion was morally messy, and only vacillatingly inspirational. Nor did it have a clear positive outcome. Hollywood slavery films almost always conclude with some version of freedom and/or martyrdom pointing to incipient change. The Turner rebellion is difficult to put in that frame. Turner was hanged, which provides a dramatic resolution, but his death didn't lead to a better life for his contemporaries.

Instead, in the short term, the revolt panicked the South; legislative proposals for gradual emancipation in the Virginia legislature were shelved, and not renewed. "Nat Turner's revolt contributed to the radicalization of American politics that helped set the United States on its course toward the Civil War," Breen argues. An important effect—but not one that lends itself to a clear, cathartic final image on your screen.

Perhaps most difficult for Hollywood, though, is the fact that Turner's story is distinctly lacking in white saviors. Every other slavery film includes a courageous white person who recognizes the evils of slavery. Whether it’s John Adams arguing for the freedom of the illegally captured Africans in Amistad, the German bounty hunter teaching Django to shoot, or Brad Pitt swooping in to get a message out for Solomon Northup, Hollywood’s committed to treating slavery as the background for moral action by white people.

White people save blacks in Breen's account too—but not out of morality or courage. As Breen documents, white courts were shockingly lenient in dealing with the rebels. Judges who tried suspected rebels sifted evidence carefully, and encouraged attorneys to provide a vigorous defense. Immediately after the revolts, Breen says, "Dozens of blacks were killed without trial." But as order was restored, vigilantism was suppressed. Breen estimates that historians’ claims of hundreds killed were exaggerated. He says probably less than 90 slaves and free blacks were killed altogether.

This wasn't out of altruism, but because the slave-holding class saw blacks as their property; executing slaves meant a reduction in wealth for the wealthy. As a result, the slaver class did everything they could to protect blacks. In some cases, even slaves who had joined the rebels briefly were acquitted.

Turner's rebellion murdered sympathetic victims, drew limited support from other blacks, had no clear liberation effects, and the best approximation of white saviors it can boast are self-interested slaveholders. As such, it refutes, at almost every turn, Hollywood's standard version of slavery as a melodrama of evil men defied by many good blacks and some iconic good whites.

"Restoring the uncertainty, confusion, and moral complexity to our view of the world that the slaves and slaveholders made make it easier to see the ways in which the struggles of Nat Turner continue today," Breen argues. One of the central truths of slavery, Breen's account suggests, is that it’s not a Hollywood story. That's the reason to hope that the Turner biopic next year will be true to the history, and give us a Nat Turner revolt as messy, painful, and confusing as the one Breen shows us in The Land Shall Be Deluged in Blood.