No One’s Right in #OscarsSoWhite

Both sides are out of touch and loopy. 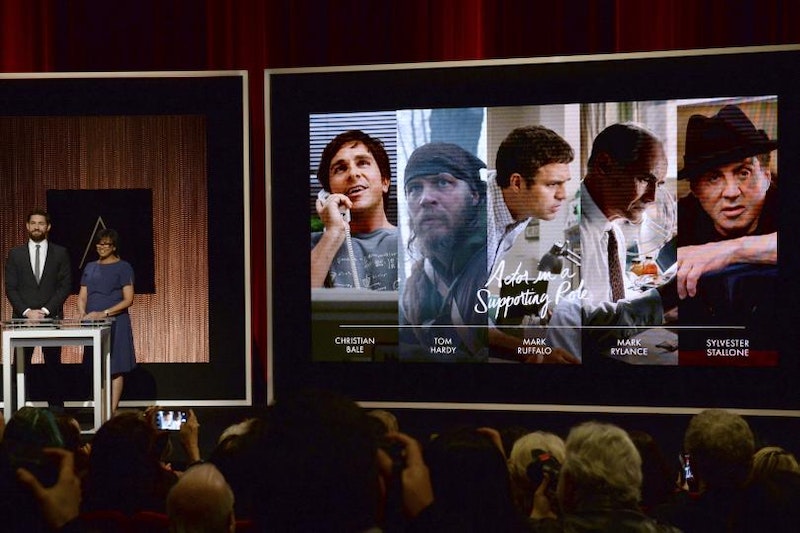 No one wins in a fight about the Oscars. It’s a meaningless dinosaur of a show run by an Academy that’s 93 percent white with a median age of 63. It’s no surprise that such a stodgy voting pool would give an empty technical achievement like The Revenant 12 nominations and ignore innovative and exciting movies like Tangerine. Not a single black actor or actress was nominated this year, and the #OscarsSoWhite boycott began as soon as the nominees were announced on January 14th.

Will Smith, his wife Jada Pinkett-Smith, and Spike Lee were the first to crow about being snubbed for their awful try-hard movies. Will Smith was an embarrassment in Concussion—he thought he could coast on that awful attempt at a Nigerian accent, but everything about the movie was subpar, something that would air on TBS at four in the afternoon on a weekday. Spike Lee’s film Chi-Raq was ambitious but equally execrable, an overlong and silly mess that made a mockery of the wasteland that’s South Chicago. Another supposed snub bandied about is Michael B. Jordan in Creed, a boring boxing movie completely unremarkable in every respect (although Sylvester Stallone’s nomination for Best Supporting Actor is inexcusable—he’s just completely useless). Ignoring Idris Elba in Beasts of No Nation is the only real head-scratcher—that role is tailor-made for Oscar consideration, then again its simultaneous release in theaters and on Netflix surely rankled just about everyone in studio accounting.

Everyone smart is keeping their mouth shut. No one looks good. Kristen Stewart suggested “Instead of sitting around and complaining about that, do something […] Go write something, go do something.” Whoopi Goldberg observed that “I won once, so it can’t be racist.” Charlotte Rampling guaranteed that she won’t win Best Actress for 45 Years when she said the boycotts were “racist against whites." The Academy’s response to #OscarsSoWhite was swift and effective: eligible voters must have been active in filmmaking within the last 10 years, unless they’ve already been nominated for or won an Oscar. Of course, the blue light special crowd that makes up most of the Academy is incensed: an anonymous Academy member whined to Breitbart that “Older people who lived through the struggles for civil rights are way more sensitive to minority issues than young people who don’t understand what it was all about in the first place. It’s fucking knee-jerk liberalism without taking into consideration what is fair.”

Someone’s salty, but they’ve got it backwards. The only way forward for the Oscars is to flush the Academy and fill it up with as many people under 40 so that hip and progressive movies like Tangerine can get half a dozen nominations. Tangerine is innovative in a several ways: it’s a buddy comedy starring two black transgendered women shot on an iPhone. I understand that the American Society of Cinematographers might feel threatened by something like Tangerine in the same way that theater chains fear more movies like Beasts of No Nation being simultaneously released theatrically and online. But recognizing innovation is what’s fair and interesting. No one involved in #OscarsSoWhite has it right except for the Academy’s PR team.