Finding Truth in Her Story

Finally, a show that deals with a variety of trans themes in a thoughtful way. 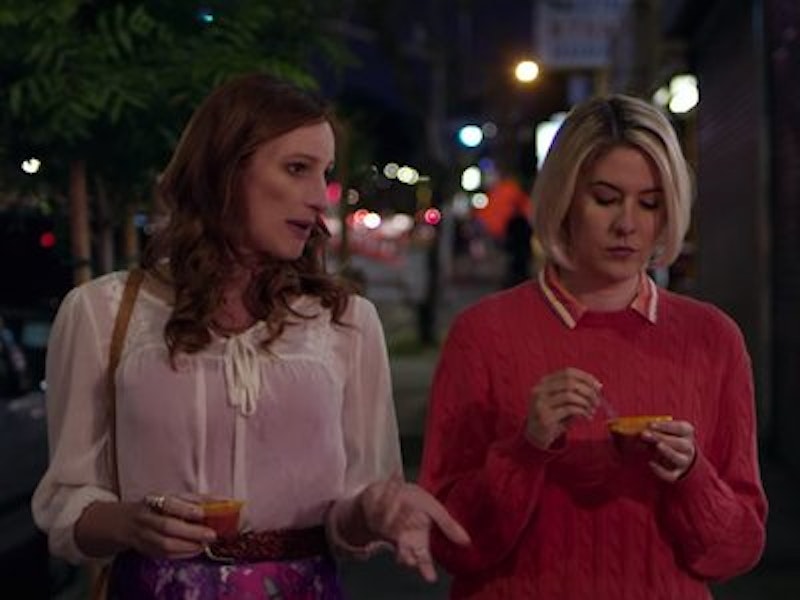 I’ve written a lot in the past about how important it is for trans people to tell our own stories. It’s not just because cis-helmed projects tend to get things wrong; it’s because those inaccuracies can be dangerous. When Tangerine came out last year, I eagerly watched it, but wasn’t satisfied. Tangerine is a beautiful and honest piece of filmmaking, but damn it’s depressing. I wanted a trans story where there was hope, empowerment, maybe a nice love story or two. With lesbians, please. But I wasn’t about to hold my breath.

Produced and written by the trans and cis team of Jen Richards and Laura Zak, Her Story follows Violet (Richards) and Allie (Zak) as they begin a cautious courtship—as well as that of Paige (Angelica Ross) and James (Christian Ochoa, making a face turn since the last time I saw him as a Latin gangster on Burn Notice). Allie is working on an article for a queer periodical about transgender people in the city, which prompts her to get to know Vi; sparks fly, but Vi is trapped in an abusive relationship, and it’ll take more than just a crush to get her out. Meanwhile, Paige is just as smitten with James as he is with her, but she’s secretly terrified of disclosing to him that she’s trans. The show brilliantly weaves compelling character drama with timely social commentary that’s as truthful as it’s blunt.

As I watched Her Story again for this review, I was forced to admit I had no idea what my thesis would be. There’s simply so much to unpack in this series that I didn’t know where to begin. But then I realized: that’s the beauty of this series, and the fact that it’s come along at this very moment in trans history. Finally, as trans issues begin to gain serious traction at last, we have a complex show that deals with a wide variety of trans themes in a thoughtful way that bears lengthy analysis. I could write a hundred think pieces on Her Story and still not be done.

Take the humor, for instance. Despite transphobic Lisa’s assertions that “they’re [trans people] all pissed off anyway,” Vi can take a joke and dish one out—just like anyone else. In the third episode, Allie makes an offhand comment to Vi about how she’s “freezing her balls off.” Vi stops and deadpans at Allie, clearly horrified. Allie backpedals furiously, castigating herself and trying desperately to explain—but Vi’s indignation melts into a devious grin; she was just fucking around. “You asshole!” exclaims Allie. “Your face,” chortles Vi. Trans folks can laugh about being trans, and more importantly, we know how to draw humor from our existence. Her Story skewers the myth of the Mirthless Trans Horde, replacing it with the obvious reality: we want to have fun and still be respected for who we are. It’s not too much to ask for both, and this episode proves it on its own.

If that’s not enough, let’s look at how the series develops the Vi/Allie romance—by which I mean perfectly. By the time the two lovebirds are casually identifying one another via Game of Thrones character analogue, I was practically on my knees in front of the TV, weeping: “Just make out already, you flawless dykey dorks.” But that would’ve been too easy; besides cheapening Vi’s arc, rushing her courtship with Allie would’ve been dishonest. Trans romance takes time. When you’re not entirely comfortable with your own body, offering it in any way to someone else is a hell of a prospect, especially when you don’t know how they’ll react. Vi is too caught up in how other people perceive her—whether or not she “passes,” whether she’s being laughed at, if she’s sufficiently femme in comparison to cis girls—to be comfortable with Allie at first. It’s only by sharing emotional intimacy that those walls are eventually broken down.

That uncertainty is at the core of Paige’s arc, too. Her unwillingness to disclose is one that thousands of trans folk share. “I used to broadcast my whole history,” she shrugs. “All that did was scare people away.” And that would be sad enough if it were the whole story, but those same people who shy away from the idea of dating a trans person can become violent upon learning that, in fact, they’ve dated one already. So Paige is entirely justified by not disclosing, though she clearly wants to and comes close to doing so—but in the end, it’s Lisa who publicly outs Paige, forcing her to fess up to James. “I just wanted to be that girl that you were seeing, no complication,” she explains, but it’s somewhat hollow; Paige knows we all come with complications, and transness is simply a larger one than most others.

This complexity is almost never afforded to trans characters. The idea that a trans character can be wrong but justified in her actions is a nuance I’ve never seen before. In mass media, we’re either angelic martyrs (Law & Order: SVU) or hypersexual Girls Your Momma Warned You About. But Her Story changes all that, marrying spot-on political discourse with fully-realized trans characters the likes of which have never been seen on TV (which is probably why it’s a web series). The cis folks are great too—I have an entire paper burning a hole in my brain right now on how Allie is both the best and worst aspects of allyship in one body—but I’m reeling at how refreshingly human the trans women I saw on screen were, even now.

Allie and Vi’s final wordless kiss is one of the most cathartic moments in my film-watching life. At last: a story that tells the tough truth about living and loving as a trans girl, that doesn’t pull its punches but allows its heroine to find happiness in the arms of a woman who loves her not despite her identity, but because of it—and everything else about her. Her Story should be the bible for every fictional trans narrative in mainstream television, and serves as a testament for what can happen when you let us tell our own stories.