The Gone With the Wind of Screwball Comedies

Setting racial wrongs to right in His Girl Friday. 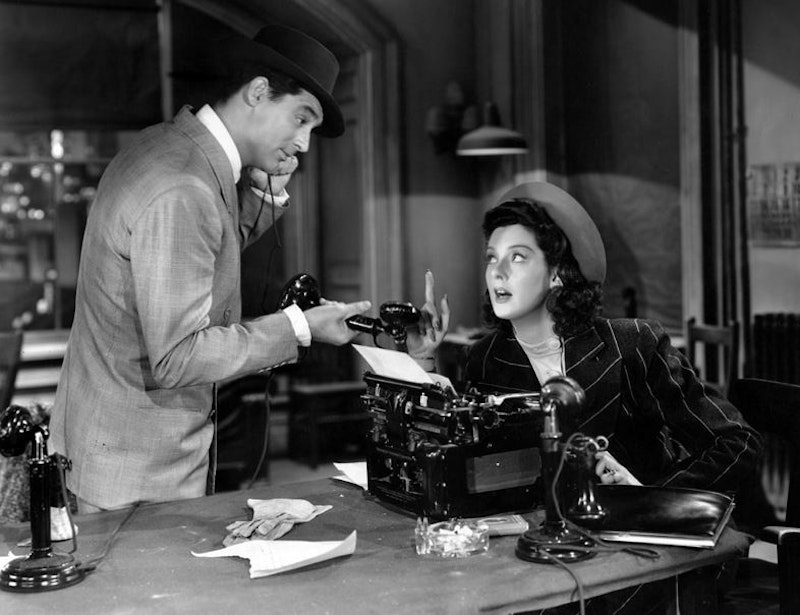 This is the last in a series on screwball comedies. The previous essay on Taming of the Shrew is here.

Screwball comedies are "screwball" because they're about the world turned upside down. In screwball comedies, women have money and power; men are weak and emasculated. The rapid-fire dialogue patters over a society gone wrong way round. The lows are high, the highs are low, the bonds of marriage are ruptured. Nothing is where it should be—until the end (usually) puts husband on top of wife, in bed, where they were meant to be.

His Girl Friday is an unusual screwball comedy in that it connects its gender and political discombobulation. The 1940 Howard Hawks film stars Cary Grant as Walter Burns, an unscrupulous newspaperman, and Rosalind Russell as Hildy Johnson, his ex-wife and star reporter. Hildy is about to marry a second husband, Bruce Baldwin (Ralph Bellamy), but Walter is determined to get her back—both because he loves her and doesn't want to lose her as a reporter. "You've got an old fashioned idea divorce is something that lasts forever, 'til death do us part.' Why, divorce doesn't mean anything nowadays, Hildy, just a few words mumbled over you by a judge," Burns quips. The neat reversal expresses anxiety about the decay of marriage and a determination to make old-fashioned values look new and hip. Beneath Burns' hard-bitten cynicism lurks a hard-bitten traditionalism.

As in the private sphere, so in the public. Walter lures Hildy back to work for him on one last story involving city corruption and incompetence. A working-class nebbish, Earl Williams (John Qualan), lost his menial job, and in a spiral of despair shot a police officer. The police officer was black. The mayor (Clarence Kolb) and Sheriff (Gene Lockhart) hope to secure the black vote by executing Williams, even though he's mentally incompetent and (it’s implied) corrupted by Communist propaganda. Walter throws the power of his paper behind Williams, both to sell copies and to right the manifest injustice.

The manifest injustice is specifically racial. His Girl Friday was released only a year after Gone With the Wind, the most successful American film of all time. That blockbuster movie equates corruption and bad government after the Civil War with black enfranchisement. The South, in Hollywood's Lost Cause myth, is ravaged by unscrupulous white northerners supported by lascivious and/or tragically confused black dupes.  It’s not white people who oppress blacks, Gone With the Wind insists, but black people who oppress whites. This all makes sense if you believe in white supremacy and see black political power as inherently wrong or dangerous. Black government in Gone With the Wind is corrupt and mismanaged precisely because, for Hollywood, white people are supposed to rule.

His Girl Friday takes a more comic approach, but uses similar tropes. The big difference is that the travails of an upper class white woman are replaced with the persecution of a working class white man. Poor Earl is targeted by the police in the name of black rights. There's even an aside in which the newspapermen laugh about a black child who’s christened for the Sheriff—a joke which is meant to delegitimize the city government by associating it with the supposed childishness and minstrel slapstick of black people. It's up to Walter, newspaper owner and capitalist, to fix things, joining with Earl in the name of white solidarity against the insidious influence of black voters.

Walter's mastery throughout the film is inseparable from his wealth, whiteness, and maleness. Cary Grant's performance is a masterpiece of suave bluster and commanding balderdash. A quintessential meme from the film shows him standing impossibly straight and buttoned-up in his dashing suit, gesturing imperiously with one arm as he declares, "Get out!" It's over the top, but the self-parody doesn't undermine Walter's authority; it buttresses it. His quick talking bamboozles Hildy, who lets him dazzle her with visions of fame, fortune and professional success. He sends Bruce off to prison three or four times; he manipulates everyone so deftly that he can say with confidence at the end that Hildy is not only re-joining the paper, but that she never meant to leave. In the film's most famous ad lib, Walter winks at the audience to let them know he knows he's in a film. When he's asked what Bruce looks like, he fires back, "He looks like that fellow in the movies—Ralph Bellamy." It's as if Walter is not only the star, but also the casting director.

Walter is, as Bruce notes, incredibly charming. ("His grandfather was a snake," Hildy snaps back.) That's because he remains unflappable amidst infinite flapping. Hildy shows frustration, sympathy, love, uncertainty—she's distracted from her goals and vacillates between job and fiancée. But Walter always wants what he wants—Ralph sidelined, Hildy by his side, the story for his paper. He's an island of order amidst a sea of words and wackiness.

The film trundles on so quickly, and with such good cheer, that it's easy to miss the exact nature of the order that Walter offers. But at the end, when all has come to pass as Walter desires, you do wonder whether Walter's desires are quite so charming. Hildy's been rescued from a boring marriage to an insurance salesman and is back at Walter's beck and call (he even rescinded his offer to give her a raise). The mayor who was too propitious to black people has been safely ejected, and a government that cares only about white people will, presumably, move into office. All is right with the world; the screwball is unscrewed. Rich white guys triumph onscreen, much as they do in real life. It takes some quick talking to make you cheer for that.