A return for Pixar. A 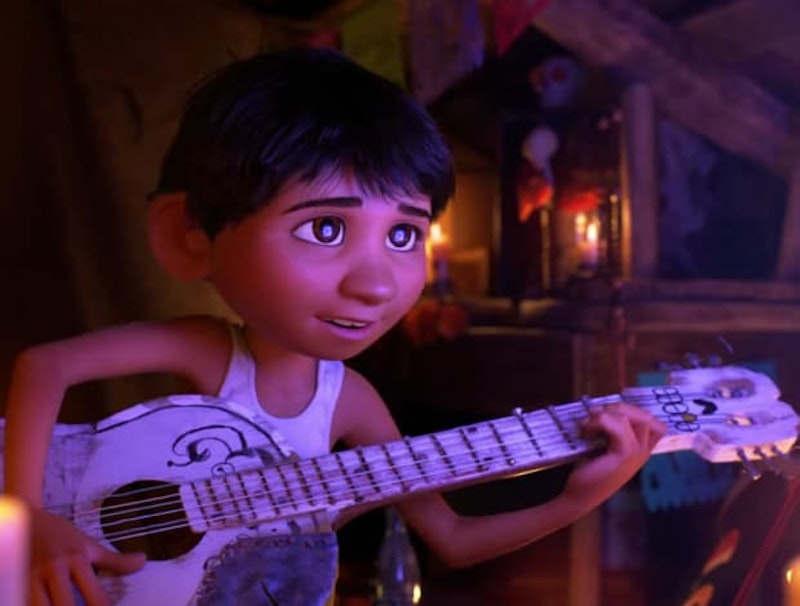 For many years, there wasn’t a more trusted name in Hollywood than Pixar Animation Studios. Not only was its technology groundbreaking and its characters indelible, but there was always a standard of quality. Some of its films were better than others, but for most of its first decade, you knew with Pixar that you were getting something special.

More recently, Pixar has become less of a sure thing, with an overreliance on unnecessary sequels and prequels, and even some originals, like 2015’s The Good Dinosaur, that were totally lackluster. Beyond that, corporate cousin Disney Animation Studios, also under the leadership of John Lasseter (who just stepped down for inappropriate behavior), has begun to overtake Pixar, which such recent classics as Frozen, Zootopia and Moana.

So it’s a pleasant surprise that Coco, Pixar’s latest release, is a nearly complete triumph. It’s got a distinctive look, truly virtuoso animation, and a compelling, tear-jerking story. Unlike most Pixar films of late, even the non-sequels, it never feels like a knockoff. It’s the studio’s second undisputed classic this decade, following 2015’s Inside Out.

The film, directed by Toy Story 3’s Lee Unkrich and based on Unkrich’s original idea, is set in Mexico and against the backdrop of the Mexican Day of the Dead: Miguel (Anthony Gonzalez) is a 12-year-old who dreams of being a musician, despite his family’s multi-generational banishment of any type of music. When a mishap involving the guitar of legendary musician Ernesto de la Cruz leads him into the Land of the Dead, Miguel must find his way home, while reconciling his musical aspirations with his love of his family.

There are various twists and turns, some more predictable than others; I figured out about 10 minutes beforehand exactly what the film’s emotional climax would be, but it still moved me.

Part of Coco’s success is the photorealistic animation, which approximates camera pans, while the fingers on the guitars are actually playing the right notes. And the family stuff is emotional, without becoming too saccharine. There are some excellent songs, too, by the Frozen duo of Robert Lopez and Kristen Anderson-Lopez, along with Adrian Molina and score composer Michael Giacchino.

Pixar’s upcoming slate may be troublingly sequel-heavy, including a completely unnecessary fourth Toy Story movie. But Coco is a sign that, for now at least, the magic is still there.

Roman J. Israel, Esq. misses its one big objective. B-

Roman J. Israel, Esq., is the rare film that does all of the little things exactly right, but swings and misses terribly at its one big objective. It’s admirably ambitious, with some great ideas, but its central conceit just doesn’t work.

The film, written and directed by Nightcrawler’s Dan Gilroy, is the sort of lawyer story not often told by Hollywood: Israel (Denzel Washington) is an aging 1960s type, an idealistic attorney who has spent most of his career doing strategy and memos behind the scenes alongside his partner, a legendary defense attorney and civil rights giant who does the work in the courtroom and gets all the accolades.

When a health crisis befalls his partner, Israel is forced into court, and later brought into a more capitalistic firm, led by designer-suited slickster Colin Farrell. But then a sudden moment of weakness leads to a huge moral dilemma. Much like the recent Ben Stiller film Brad’s Status, Roman J. Israel is the story of a middle-aged man who’s lived a long life marked by not selling out, and reaches the point where he sort of wishes he had.

There are so many wonderful ideas at play here that I wish they were in the service of a better movie. While not quite as cynical about the law as Nightcrawler was about journalism, Roman J. Israel has points to make about the unfairness of the criminal justice system and beyond that, it looks at the sincere career do-gooders in the legal profession, and activists in general, and asks whether their life’s work has been for naught.

There’s also a great scene of Roman addressing a group of Millennial-aged activists, which demonstrates how the lefty activists of the 1960s generation and today are barely even speaking the same language. This leads into Israel’s tentative flirtation with a younger activist (Carmen Ejogo), whose character arc is probably more compelling than his is.

So what’s the problem? The film’s second act. Israel makes a certain choice, and that essentially turns him into a completely different person for about 45 minutes. It’s wildly unconvincing that the character we’ve seen up to this point would do this, and it’s equally jarring not long afterward when he snaps back into place for the third act. This huge contrivance is built upon several smaller contrivances, such as the unlikelihood that a certain act wouldn’t have been sussed out within hours.

This is so unconvincing that it sinks the movie altogether. And just when the film seems to be recovering, its ending is sort of gross—implying that one character had to sacrifice himself for another to attain personal growth.

It’s unfortunate that so much good effort is wasted. There’s some outstanding L.A. cinematography by Robert Elswit, a soundtrack full of first-rate soul and Motown tunes, and a superb lead performance by Washington. Socially awkward to a fault, and possibly on the autism spectrum, Roman J. Israel is truly unlike any lawyer you’ve seen on screen before.

When a film gets everything wrong across the board, it’s annoying. But when it falls so short of its potential as Roman J. Israel does, it’s downright infuriating.