No male posturing or exaggerated teenage taste in Greta Gerwig’s directorial debut. B+ 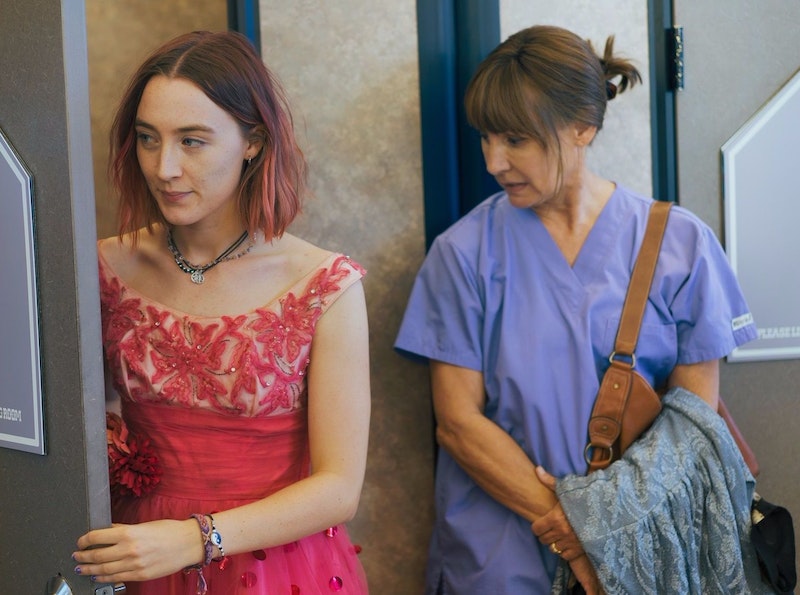 I'm so sick of Noah Baumbach. After 2005’s The Squid and the Whale, a moving portrait of a family falling apart and the trauma of divorce, and 2010’s unfairly maligned Greenberg, starring Ben Stiller as the titular misanthrope who refuses to grow or change or accept love into his life, Baumbach has settled into a very boring kind of Wes Anderson/Whit Stillman cosplay. 2012’s Frances Ha was an embarrassing Woody Allen homage, one that would surely be pilloried today but received acclaim back then; and then 2015’s Mistress America, camp and quirkiness with no real people or grounding in reality.

But this isn’t a review of whatever Baumbach’s doing on Netflix at the moment—it’s about Lady Bird, the first film written and directed by actress Greta Gerwig, Baumbach’s wife. After falling in love on the set of Greenberg, Gerwig became Baumbach’s muse, and his work took a nosedive. I like Gerwig a lot as an actress, even though I despised the “mumblecore” movement she came out of. She was frequently great in otherwise awful films: Baghead, 20th Century Women, Jackie, Damsels in Distress, To Rome With Love, even the two Baumbach movies I mentioned. But so often she’s typecast, and, especially with Baumbach, she’s treated like a variation on the “manic pixie dream girl” defined by Zooey Deschanel in (500) Days of Summer and Natalie Portman in Garden State. Baumbach’s boring movies about the new love of his life made both of them, but especially him, look incredibly vapid and lacking in self-awareness.

Yet how refreshingly straightforward Lady Bird is. Caution goes up whenever I hear the words “coming of age” from a writer/director in their 30s or 40s, even 50s—movies like The Perks of Being a Wallflower, 20th Century Women, and Moonrise Kingdom are naked attempts at proving how cool the director was when he (invariably a he) was a teenager. I don’t care that you listened to Black Flag, got Fear of Music the day it came out or somehow knew about The Smiths in 1983. So the advertising begins for Gerwig’s Lady Bird, in her words “a female counterpoint to tales like The 400 Blows and Boyhood.”

Saoirse Ronan stars as the titular teenager, a Sacramento high school senior in 2002. The only other signifier that this is a movie made by someone who came of age in the early-'90s is Lady Bird’s very cool Kurt Cobain style: ratty hair dyed red with the roots grown out, striped shirt, mohair cardigan. Still I was suspicious—would Lady Bird be bogged down with insufferable mixtape-swapping and youth code signaling? No, thank God. Gerwig’s film isn’t particularly innovative, but why reinvent the wheel here? Not everybody has to subvert and deconstruct age-old narrative structures. Sometimes a piece of cake is just a very good piece of cake. That’s Lady Bird—not quite slight, but certainly not insubstantial, and it’s a film that really does offer a different perspective than the dick-swinging posturing of every other male coming-of-age story.

The setup is familiar: Lady Bird wants to go to college in Manhattan, but her mother (Laurie Metcalf) can’t bear the thought. Her father (Tracy Letts) is more sympathetic, but they’re a family counting on financial aid and job opportunities that are drying up. Lady Bird attends a parochial school, where she frequently mouths off to teachers (hilariously telling some crow on a pro-life rant that her mother should’ve gotten an abortion and spared the students the lecture) and zig-zags her way through typical teenage struggles: first love, first kiss, first time having sex. There are moments of pathos that floored me and the jam-packed matinee that I was in: Lady Bird and Danny (Lucas Hedges) start seeing each other after meeting in play rehearsal, they’re madly in love until she accidentally walks in on him making out with another dude in the school bathroom. She broods and avoids him, but when they finally make contact again, she screams at him “You’re gay!”

Danny breaks down sobbing, telling her he’s scared and doesn’t know how to tell his mom, that he just needs some time. She understands, and they embrace. It was a stunning moment; a real hush went over the room.

Lady Bird’s relationship with her mother is also refreshingly complex and equally full of pathos. Metcalf’s character is not the stock absent parent that just doesn’t understand like so many other coming of age movies—they have a very charged relationship that isn’t easy to sum up in a slugline. There’s a bit of resentment, a bit of panicked clutching realizing her baby is about to go away, things that lurk under the surface and only appear when the pressure is on. And thank goodness Gerwig was honest and didn’t make Lady Bird some mystical arbiter of cool in the early aughts—she listens to Alanis Morissette! In 2002! This is a revelation, and a new standard for films about teenagers: don’t exaggerate their taste, but more importantly, don’t focus on it. I could go a lifetime without seeing another scene of some kids sitting around a stereo talking about how cool The Clash, David Bowie or Sonic Youth are. It’s predictable, plastic and two-dimensional.