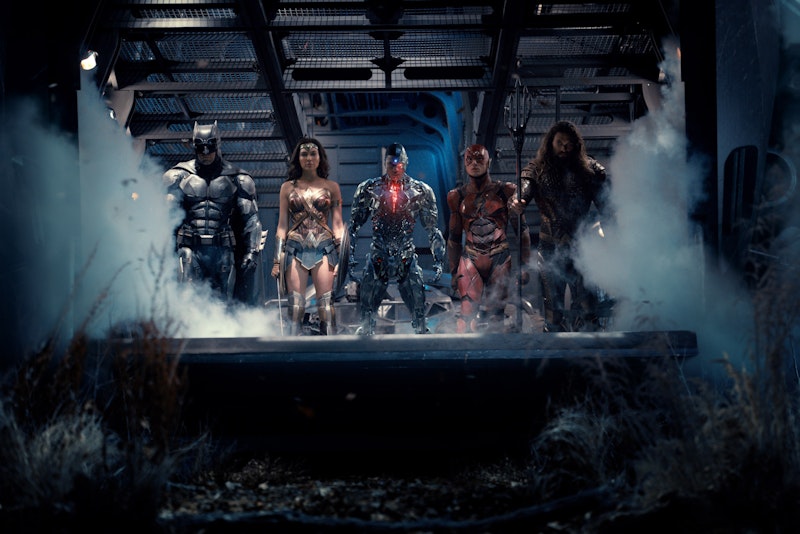 From the depths of Batman v. Superman: Dawn of Justice, which arrived 18 months ago as one of the worst superhero movies ever made, I can say that with the new Justice League, the DC Extended Universe has made a significant leap: From downright disastrous, to merely flawed.

There are improvements over the previous DCEU team-up movies Batman v. Superman and Suicide Squad, both from 2016. There are three or four legitimately wonderful movie moments. The personalities of the actors get to show a bit, and the cast has some chemistry. Danny Elfman’s rather understated score gets away from the pulsating Hans Zimmer template. There’s levity, joy, humor, and even, in a couple of cases, sunlight, and not so much existential angst. It’s nowhere close to the fun-free slog that was BvS.

That said, Justice League does suffer from quite a few pitfalls familiar from its predecessors, as well as modern superhero pictures in general. Despite a running time that’s almost two hours, the pace is sluggish. The film has trouble juggling a large cast and keeping all of their powers and characteristics straight. Most of the action sequences are poorly staged, filmed and blocked. And the villain is terrible.

Justice League represents a superhero team-up, six years after Disney/Marvel first did it with The Avengers. We have Batman (Ben Affleck), Wonder Woman (Gal Gadot), The Flash (Ezra Miller), Cyclops (newcomer Ray Fisher), and Aquaman (Jason Momoa). Superman (Henry Cavill) is “dead,” but see if you can guess whether or not he makes an appearance.

The big change is that director Zack Snyder (of Man of Steel and BvS) stepped away from the project during production following the tragic death of his daughter. While Snyder is still the sole credited director, Joss Whedon stepped in to finish the film, both in reshoots and the editing of the film (he’s also credited as co-writer).

The obvious temptation is to give Whedon credit for all of the good parts and Snyder for the bad, but it’s not quite that neat and simple. Even if there are multiple instances of Snyder’s signature shot of something large exploding at the center of the screen.

The plot has Batman and Wonder Woman convening a team of superheroes in order to stop demonic villain Steppenwolf from assembling a trio of glowing cubes, which would trigger the end of the world. One of those same cubes, meanwhile, may have the ability to resurrect the dead, which is the sort of thing that may come in handy for reasons you can probably guess.

The action scenes aren’t quite as incoherent or nihilistic as the worst of Man of Steel, Suicide Squad, or Batman v. Superman, but most of them combine spacing that’s hard to follow with an overreliance on extreme close-ups. The finale is better than most sequences of its kind—even if there’s no clear sense of how far apart the characters are or which direction they’re going.

It was Patty Jenkins’ outstanding Wonder Woman film this past summer that finally broke the DCEU’s losing streak, so it’s no surprise that she’s the best thing about Justice League by a significant margin. Her action moments make sense, she has a killer gag involving the Lasso of Truth, and she’s a greater presence on screen than any of her costars. The DCEU brain trust hasn’t made a lot of great decisions, but the casting of Gadot was certainly the best one.

As for the other characters? I’ve never objected to Affleck’s Batman—aside from his being too jacked for the role—but it’s clear at this point he’d rather be doing something else. Ezra Miller is a major talent, as anyone who has seen We Need to Talk About Kevin or The Curse of Being a Wallflower can attest. Here he’s treated mostly as comic relief, and his big action moment is somewhat derivative of the “Time in a Bottle” scene from X-Men: Days of Future Past.

Momoa’s fine outside of the action parts, but his powers aren’t impressive, and it’s difficult to set an action sequence underwater and make it interesting, which is probably why there hasn’t been an Aquaman movie until now. Fisher is compelling in limited screen time, and it’s especially nice to see Joe Morton as his father. Where’s that guy been for the last 15 years?

The dreadful villain here, Steppenwolf, reminded me of that X-Men sequel where Oscar Isaac played the bad guy, with a modulated voice and ridiculous prosthetics. Here, the alien demon is a full-on CGI creation, voiced by Ciaran Hinds, even if it sounds nothing like him, which sort of defeats the purpose. I didn’t care for one second about his story or quest, and every time he was on screen and I couldn’t wait for him to go away.

What saves Justice League from total oblivion? It’s that handful of incredible movie moments, the kind that were all but absent from previous DCEU films with the exception of Wonder Woman and, to a lesser degree, Man of Steel. One more note: A lot of vitriol gets spread, on social media especially, about the Marvel and DC movies critical “bias,” and the tendency of some to take it personally when someone says something negative about their favorite movie or superhero, or to allege various conspiracy theories, most of which involve Rotten Tomatoes.

This is all nonsense. Nobody I’ve ever met has a “bias” towards one studio or another, or one cinematic universe or even one superhero. Everyone I know who cares about comic book movies sees all of them, regardless of Marvel/DC considerations. And more importantly, they’re all rooting for the movies to be good.

I’ve written some negative things about past DCEU releases. But I want the movies to be better. I prefer a world in which Batman and Superman appear in good films as opposed to bad ones. Justice League may represent only a minor step forward for the DC movies, but a step forward it remains, and we can begin to see the outlines of a better DC era.