The Killer in Murder on the Orient Express… Revealed!

Spoiler: you know who it is. 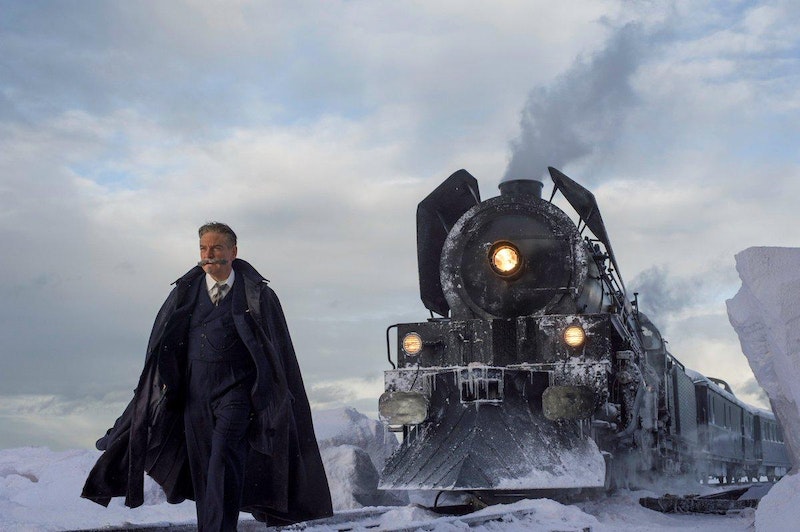 At the end of the new Kenneth Branagh-directed version of Murder on the Orient Express, Branagh as mustachioed detective Hercule Poirot turns to the suspects, all seated at a table, watching him as if he's on stage. Which he is, in all his hammy glory. "You're a very clever man," Michelle Pfeiffer, tells Branagh. Branagh as Poirot nods, and so does the movie theater audience. She speaks for us all.

Murder on the Orient Express is one of the most famous detective stories because of Agatha Christie's preposterously tricky twist ending. As everyone knows, the solution is that everyone did it. The evil criminal Ratchett (Johnny Depp) kidnapped and murdered the daughter of a wealthy American named Armstrong. Armstrong's family and friends all book themselves on a train journey with the evildoer, and stab him to death in his berth. Then they pour out of the room in an inadvertently goofy sequence that rather undercuts the film's occasional gestures towards solemnity.

Agatha Christie's murder mysteries are, on the page at least, never particularly solemn; they read like exhilarating and intentionally frivolous puzzles, with dead bodies pushed about the page like pieces on a checkerboard. The reader is in a conspiracy with the writer. Everyone’s eager to get that murder committed, so all can have the joy of finding the murderer. If we're going to have our fun, someone has to die.

Christie is aware that readers are cheering on the murderers, and her greatest novels are winking indictments of the audience. The Murder of Roger Ackroyd uses point of view in order to get the reader to identify with the murderer. The stunning revelation is not that this person or that person has committed the crime, but that "I" have done it.

Murder on the Orient Express gets to a similar place using different methods. Everyone on the train—including, in the end, Poirot himself—ends up colluding in murder and the cover-up. The final scene, in which the suspects/murderers watch Poirot from their seats, like a movie audience, signals the meta-revelation. If everyone murdered Ratchett, then that everyone includes the moviegoers.

In fact, the film suggests it’s the moviegoers especially who are responsible. Poirot, to protect conspirators, blames the murder on a ghostly small person with a high voice—someone who could be a man or a woman. This person's pass key allows them to move silently and freely through the train, just as the camera glides from room to room, looking down from above, unimpeded by walls or ceiling. The viewer is the all-seeing, intangible culprit, committing murder for pleasure, and then escaping into the snow.

In this context, the film's insistent moralizing is less an effort to grapple with the ethics of justice, and more a too-insistent excuse. Everybody keeps saying that the conspirators, who murdered Ratchett, aren't "murderers." Yes, they killed a man, but he was a murderer himself, who blighted their lives, and he deserved it. They’re good people; they just happened to want to commit one little murder. Poirot, and the script, absolves them—which is to say, it absolves you. You in the audience enjoyed the murder; you shuffled into the berth shoulder-to-shoulder with all the suspects, and looked on eagerly as they did the deed. But that doesn't mean you're a bad person!

In the novel, Christie reveals her plot with admirable aplomb and little shilly-shallying. At the end of the book different suspects troop in to tell Poirot that, yes, they too were members of the Armstrong household. It's comically efficient and mechanical; "Look! This one's the chauffeur! And that's the maid! Isn't that marvelous!" Christie giggles. You can't help but giggle along.

The film, unfortunately, wants a bit more drama than that. Poirot is saddled with the photograph of a lost love that he moons over pointlessly, and he expresses unconvincing angst over the moral dilemma of reporting or not reporting Ratchett's killer. Branagh isn't willing to embrace the story's theatricality. He wants the drama to be real, when the whole point is that the murder is just a trope.

Still, the movie version has some advantages over the book. Michelle Pfeiffer plays the character of Linda Arden—the murdered Dolly's grandmother. Arden, in the novel, pretends to be the ditzy Mrs. Hubbard, turned into a man-hunting Cougar for the film version. The final twist revelation of the plot is when Mrs. Hubbard reveals herself to be Arden—a scene which works better on film than in print. Pfeiffer pulls off her wig, revealing that she's an actress playing a part, which, of course, she is. Everything's been staged; everyone is in on the plot. Murder on the Orient Express isn't a perfect adaptation, but it's hard to dislike a film that so blatantly lets you get away with murder.