The New Ghostbusters Is So Gay

In all the best ways. 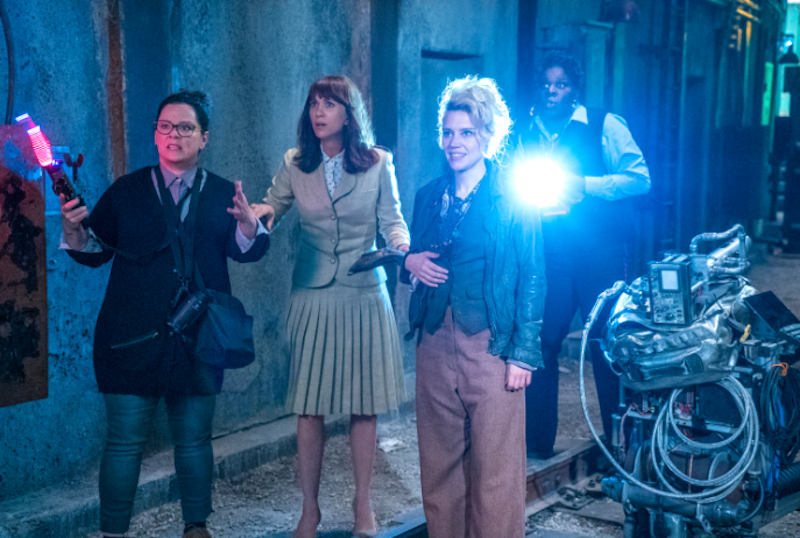 I took a girl I like out on a date to see the new Ghostbusters movie, and somehow, the gayest stuff in the theater still happened on screen.

In the interests of full disclosure, I hadn’t seen the original Ghostbusters until a few nights ago, after I’d already seen the reboot. (Thoughts: it’s trashy and doesn’t hold up.) All I knew was that the new version starred a bunch of wickedly talented female comedians, a crime for which it was thoroughly scourged across the Internet (its trailer became the most disliked video on YouTube after various men declared it sexist, a “pile of rat feces,” etc.). But I also knew that the villain was Reddit personified, so I was in.

Along for the ride was a girl I’d been seeing lately; we grabbed too-pricey tacos, and slipped into the theater midway through the trailers (unfortunately, not too late to see a preview for Trolls). She’d seen the original, but only as a child, and had only a vague recollection of being frightened by the specters. Thus we prepared ourselves for the year’s most bizarrely controversial big-budget comedy with no preconceived notions.

I could go on about the jokes, which manage to avoid all the Bill Murray skeeziness of the original; the CGI, which legitimately scared me (though I admit I’m a soft touch in that department); or even Andy Garcia’s delightful run as Mayor of New York. But if I concentrated on any of that, it would merely distract from the most glorious thing about Ghostbusters: the blazing lesbian inferno that is Kate McKinnon.

McKinnon’s character Jillian Holtzmann pops up early on as Abby’s (Melissa McCarthy) engineer partner-in-busting. As Erin (Kristen Wiig) pays her old friend a visit, Holtzmann gives her a head-to-toe appraisal from her swivel. “Come here often?” she purrs. I melt. So does my date.

Holtzmann is plainly queer-coded; it’s not just the meaningful glances toward her fellow protagonists, ladies’ suits, and wild, bleached-blonde hair, though that all certainly contributes. It’s not even that scene where she licks her bustin’ guns. What clearly marks Holtzmann as gay is, simply, every bit of characterization McKinnon herself brings to the role.

The SNL star is openly gay, something that will fail to surprise anyone who’s seen her reaction to having her hair pulled in this YouTube video. Just because McKinnon is gay doesn’t mean Holtzmann is by default—but listen to her growl gentle, suggestive instructions to Erin, Abby, and Patty (Leslie Jones) and tell me I’m wrong. Listen to her suddenly-serious toast to all of them at the film’s close, in which she almost breaks down with pent-up emotion, and tell me I’m reading too far into things. Director Paul Feig certainly won’t. The only reason I have to rely on subtext at all here is that Sony wouldn’t let him declare Holtzmann’s queerness on-screen.

By the time Ghostbusters’ total Holtzmann time had passed 10 minutes, my date and I were holding hands. We kept looking over at each other, whispering, “She’s so gay!” We could hardly contain ourselves. At one point I leaned over to give her a kiss simply because I had to find an outlet for all the building dyke-feels inside my heart. If she’d actually gotten to kiss one of the other women, I’m certain one or both of us would have wept. (Me for sure. Damn these hormones!)

And if two women who already know they love women and live as such openly can get this verklempt over seeing a representation of themselves on the big screen, what does this mean for the little queer girls for whom this movie will be their first introduction to Ghostbusters? (If you are a parent of a small girl and felt it necessary to show her the original before this movie: shame on you.) Seeing Holtzmann slide across the screen on a cloud of lesbian magic is a transcendental experience for any girl who’s not sure heterosexuality is up her… er, alley.

What I’m saying is that Kate McKinnon directly led to me getting to make out with a hot girl last weekend, and I heartily endorse the perpetuation of this burgeoning “let the gays do what they want” trope in Hollywood.