All the King's Men Are White 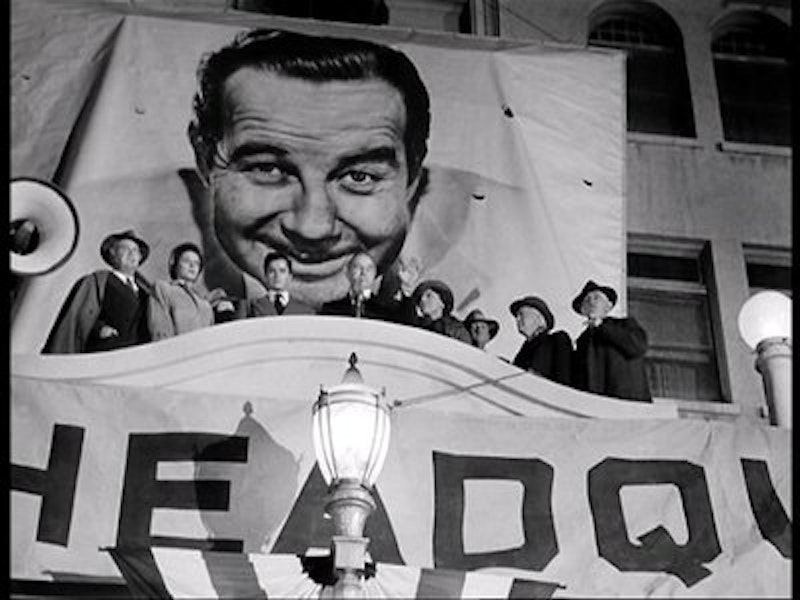 This is the third in a series on political films. The second post on The Great McGinty is here.

Black actors weren't given many roles in mid-century Hollywood political dramas. In The Great McGinty (1940), the lead character has a black house servant who gets some screen time; in Mr. Smith Goes to Washington (1939), a couple of black porters get a line or two. Neither film mentions civil rights, consider for a moment that black people might have political opinions. But in both, at least, on the margins, black people exist—if only to emphasize their political irrelevance.

But All the King's Men is different. Set in a nameless Southern state that is sort of Louisiana, the film follows the career of rabble-rousing Huey Long analog Willie Stark (Broderick Crawford). Stark, like Long, is a white populist: he rails against corrupt fat cats, and promises semi-socialist solutions, including a free hospital, which he presents not as a "charity," but as a "right" for all people. Stark at the beginning of his career is an "honest man," but to succeed he has to make compromises with the machine and the wealthy interests he decries. As governor, he places himself above the law, committing graft, blackmail, and extramarital affairs with impunity. Finally, at his moment of greatest triumph, he’s assassinated by Adam Stanton (Shepperd Strudwick), a doctor whose father Stark drove to suicide. Stark dies wistfully repeating his own name. End of moral.

In the film, Stark was blackmailing Adam Stanton's father, Judge Stanton (Raymond Greenleaf) about an indiscretion in the judge's past; the message is that everyone cuts corners to get ahead. In real life, Huey Long was assassinated by a judge’s son (a doctor) in 1935—but the circumstances were a bit different. Long did not discover corruption in the judge's past; he simply accused the judge and his family of having a black ancestor. It was this racial smear that led the doctor to shoot the Governor. Long didn't die because of the pervasiveness of corrupt graft. He died because of the pervasiveness, and volatility, of racism.

It's easy enough to see why All the King's Men didn't want to portray Adam Stanton as an outraged racist. Adam is supposed to stand, in the film, for upright moralism—in the film he's outraged at the death of his father, and at the relationship between the married Stark and Adam's sister Anne (Joanne Dru.) All the King's Men is supposed to be morally complex, but having one white supremacist shoot another white supremacist in the name of white supremacy is perhaps a little too downbeat, even for a supposedly cynical Hollywood noir.

All the King's Men is in a difficult position; it’s trying to interrogate white populism without allowing white people to look bad. The film does this through the so-obvious-it's-brilliant expedient of removing black people from the American South altogether.

For white progressives, removing black people makes the politics of anti-poverty much more straight-forward. When Willie Stark funds schools and hospitals, it helps the poor. Historians have pointed out that, despite his assertions to the contrary, Long's anti-poverty programs did little to aid black people. Stark, though, doesn't need to worry about that, since there are no black people in his state. If the South is monochrome, Stark is nobler and more effective.

The elite case against white populism is, oddly, also bolstered by the erasure of the African-American poor. Stark is implicitly compared to Hitler in the film. He's got uniformed police following him everywhere, he threatens to use the state militia to stage military resistance to democratic institutions, and his angry speeches with boisterous crowds gesture visually at Nazi rallies. Nazism was, of course, centered on racism—a context eliminated in the film. Take the racism out of white populism, and suddenly you can smear socialist programs directly as Nazism, without having to grapple with prejudice at all. Championing the poor or denigrating the mob—both are a lot simpler for white people if white people are the only poor mob around.

Most historians agree that Long's racism was relatively casual. Donald Trump's anti-immigration program is central to his message; Long was more of an opportunist, using racist appeals when they were convenient, and making noises about racial inclusion in his poverty programs when that seemed likely to net him more votes. But that doesn't mean that Long was racially enlightened. It just shows how pervasive racism was for politicians in the South—and throughout the country.

Acknowledging the racism of white politicians would mean abandoning the melodrama of innocence and corruption so beloved in early Hollywood political films. Does Capra's Mr. Smith plan to include black children in his boys' camp on the banks of that pure Western river he speaks of so lyrically? When Sturges' McGinty suddenly decides to be an honest man, does that mean he's going to desegregate government offices?

Like these other political films, All the King's Men is obsessed with purity, honesty and integrity; its big theme is the relationship between power and corruption. Willie Stark, and the newspaperman Jack Burden (John Ireland) who supports him, both begin without power. They’re pure of heart. Then they gain influence, and do awful things.  It's a familiar arc… but it's only possible if you assume that Stark and Burden (and Smith, and for that matter McGinty) had no power to begin with.

In an apartheid society, though, white people do have power. Even when he was poor and struggling, Burden is hired at a major newspaper, and is treated as an acceptable suitor for Anne, who belongs to one of the most respected political families in the state. Stark’s poor and a political outsider, but even so he’s able to attend law school. The "hicks" who Stark champions are disadvantage and exploited—but they have the right and the power to terrorize black people.

American political dramas build their plots around innocence besmirched, and around the struggle of the powerful vs. the powerless. They like to talk about machine politics and class antagonism, the insider vs. the little guy. Black people make that narrative hard to sustain, because they suggest that power is not simply hierarchical, but multi-polar. That outsider, beaten down by poverty, can sometimes join forces with the insider to oppress someone else. In a drama about populism in a Southern state, the existence of black people raises a question that Hollywood doesn't want to think about—whether black people have the right to exist. Politics is not, in these films, about rights, justice or equality. Politics is a drama of white innocence. Which is why, in All the King's Men, none of those men, or women, are black.