CinéBistro, Stuber, and the death of the cinema as territory of political conflict. 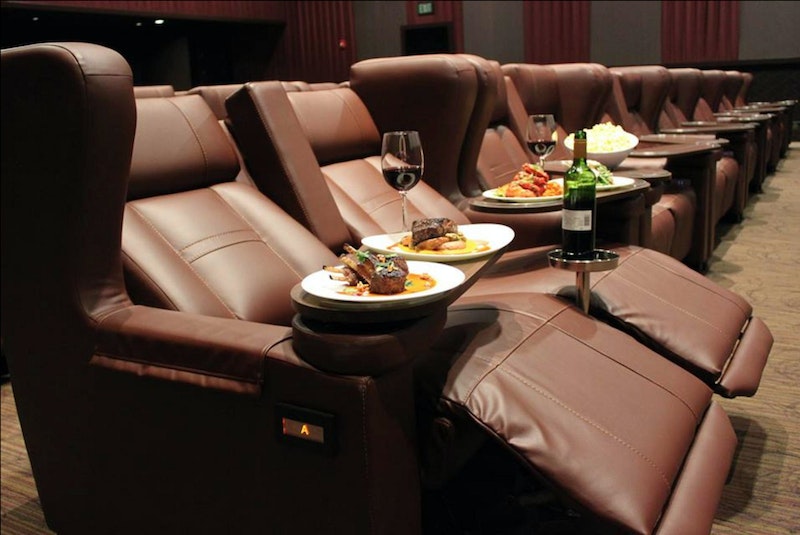 CinéBistro is the newest movie theater in the Baltimore area, and the theaters themselves are all great: vivid curved screens, seating that’s comfortable without being grotesque (no beds yet). Besides the overpriced tickets and inedible food, it’s just as good a theater as the Landmark in Harbor East and the Cinemark in Towson. But the smell of the CinéBistro is so revolting, and so thick, that it sticks to you, and you leave marked like a skunk. It’s not as intense as the airborne ecosystem of a Royal Farms, but it’s more disgusting because it smells like fried, stale vomit. I’d rather smell like fried chicken. To see a movie at the CinéBistro is to see a movie in a McDonald’s ball-pit—still, I know this smell and it doesn’t come close to the vomitorium environment of this movie theater. Only airports and jury duty remind us so vividly of how repulsive the human body is.

Stuber is a strange movie for multiplexes in 2019, and it's an endangered species: studio comedy. Directed by Michael Bowse with a budget of $16 million, it stars Kumail Nanjiani as Stu and Dave Bautista as Vic in a less successful reprisal of 2016’s Central Intelligence: a screwball action comedy featuring a meek comedian and an athlete. How far Hollywood has fallen in only three years… that summer we also had The Nice Guys, Sausage Party, Popstar: Never Stop Never Stopping, Mike and Dave Need Wedding Dates, Bad Moms… that list only looks good knowing what’s coming next—nothing. There were six people in the theater when I saw Stuber. Every movie I’ve gone to this year has been sparsely attended. This isn’t just matinees and obscure revivals. The end of the decade approaching just makes it clearer that in the 2020s movie theaters will die.

But for now, thin gruel. Stuber: a surprisingly rude and right-wing script, with unabashed product placement (not only Uber, but Sriracha, iPhones, Lasik). Stuber is proud of what it is: loud, fast, dumb, and fun. It wants to be fun, and it thinks it’s fun. It doesn’t think it’s that smart. It’s playing in 3,050 theaters across America right now. How many people will see it before it hits homes? How many people will talk about Stuber, or remember much at all about it? The plot generally resembles a recent episode of Black Mirror: Stu (Nanjiani) is an Uber driver with a lousy rating and worse luck. Vic (Bautista) is a cop whose partner is killed in the beginning of the movie by the subject of a years-long investigation he becomes obsessed with. “The feds” step in, and he’s stuck doing desk duty. He’s getting old, he’s neglecting his grown daughter Nicole (Natalie Morales), and his eyes are going. He gets eye surgery and calls an Uber for the first time. Stu, meet Vic, your new partner.

Of course Stu is henpecked and friend-zoned, and of course Vic is a skilled cop with skewed priorities and anger issues. They make a decent team. I really wanted to like Stuber as much as something like Central Intelligence, but despite its unusual amount of graphic violence and crude streak, the script isn’t strong. Mean is a feeling, and it’s often a good one in movies, but here there’s nothing to support the spirit. Not that one has to look hard for meanness in pop culture today, though it has largely disappeared from movies and television in the Trump era (are podcasts really the transgressive art form du jour? Lord help us). Mel Gibson was welcomed back into the fold at the same time #MeToo started to spread, and there are films like Dragged Across Concrete and, inexplicably, Clint Eastwood, who I thought was already riddled with dementia judging by 2016’s abominable Sully. Not quite: The Mule, released late last year, is his best movie in years, low bar that may be. And though it isn’t mean—at least, it doesn’t intend to be and doesn’t think it is—The Mule is certainly retrograde and full of old white man “norms” and niceties that read as repulsive today (like when Eastwood’s character helps out a black family stranded on the side of the road—he replaces the tire the feckless husband can’t figure out, and before leaving, makes some crack about black people. They’re all nonplussed and mildly offended, but the movie moves on, at once self-aware and ignorant of its own age).

These are the “right-wing” filmmakers left. There are no more Don Siegels, no Bruckheimers or Bays—though they still kick, they barely register, and explicit political statements were never their bag anyway. Marvel has a decidedly centrist streak, so did the final episode of Game of Thrones. But political battles are not won, lost, or even fought in the cinema anymore. I remember when The Passion of the Christ, Fahrenheit 9/11, and Team America: World Police inspired pickets and protests all in the same year: 2004, which was just as epochal as 1999 and will surely be revisited with the same rosy eyes in 2024 when Trump is finishing out his second term. Fiction is starved in the Trump era because nothing can possibly compete: as satire, as commentary, as revelation, as argument. No wonder there’s been no “great millennial novel”—this angst is not transformed into art, its put into one’s identity as a foot soldier of a particular cause. There’s no desire to make great art—just the will to become more than an NPC, a non-playable character. There was always role-playing in demonstration, but today more than ever, people act out their anxieties in public. Cliques are formed around causes and candidates, not The Cure or Cro Mags.

In a surprisingly clear-headed review, Noah Berlatsky wrote for NBC that, in Stuber, “It's significant that Vic doesn't really know how to use the Uber app. He offers a throwback form of masculinity, both in his retro war on drugs crusade, and in his relationship to his job. The U.S. has de-industrialized, but it's also poured billions into law enforcement. The result is that today the iconic blue collar hero isn't a factory worker or a coal miner, he’s a cop. From John McClane to Vic, the working-class guy in Hollywood is a hard-working policeman who puts his blood, sweat and tears into a dangerous but necessary job. Law enforcement is real, honest empowering labor—not least because it gives men the power to humiliate, injure and kill other people. In contrast, the movie suggests, driving an Uber is a more trivial occupation.”

Despite Eli Roth’s remake, the Death Wish of Charles Bronson’s day has been replaced by actual vigilantes and actual crazy people shooting up buildings and bombing dumpsters. There’s no need for a Bernie Goetz because Bernie Goetz is everywhere in spirit. That’s how we get movies like The Last Black Man in San Francisco, and why a movie as harmless as Three Billboards Outside Ebbing, Missouri gets pilloried by people too eager to find problems in pulp.

On Stuber, Berlatsky continues: “Work in Stuber defines men; Stu's nickname is literally his job. But the conditions of that work are immutable and unquestionable. Capitalism makes the rules; Stu just drives where it tells him.”

Berlatsky’s is a negative review, he disagrees with the ideology, but I was in the mood this weekend to see a good right-wing action movie. Stuber just isn’t there, it’s an echo of an echo playing to a nearly empty theater. As I left, I saw the “meals” people were eating at one in the afternoon, and all that red wine, all that mayonnaise, I don’t understand it. But my nose gets it, and so does my gut. The message is to run, run very far away, otherwise here’s where you’ll lay down and die. The cinema is no longer a territory, no longer a place where battles are fought and won and lost. History is happening outdoors now, and people can’t be bothered to spend crazy money on a mostly shit movie like this. Goodbye 2010, hello 2020: the decade when we will see the movie theater die. A foregone conclusion, but cinema’s relevance? Streaming makes archiving even harder, and we’ll have thousands more lost films as the century moves on, as hard drives stop spinning and people forget what happened in 2004, or 1999, or 1984, or 1972, or 1960. The cinema cannot offend: it is on life support.