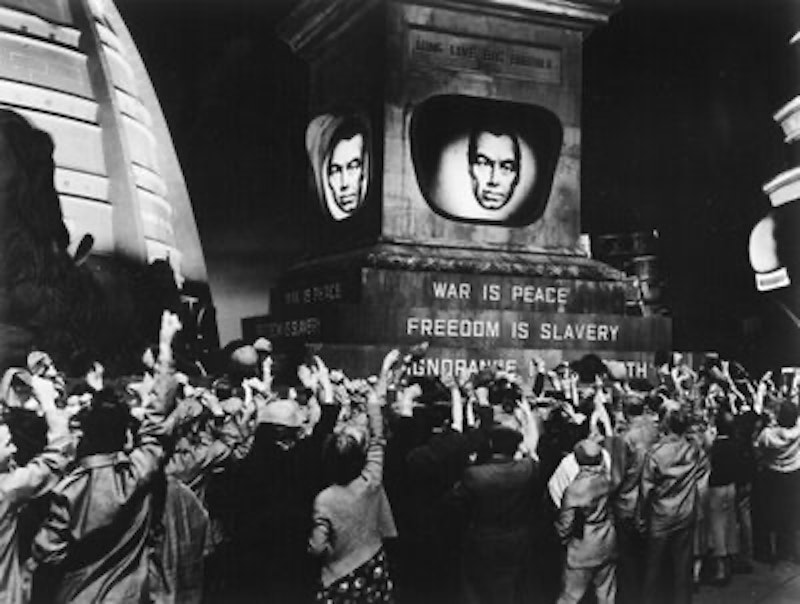 This is part of a series on fascism in film. The previous entry, on Night and Fog, is here.

The 1956 British film version of 1984 is faithful to the original in plot and spirit. As in any adaptation from novel to film, though, certain cuts had to be made. The plot is telescoped, focusing more narrowly and efficiently on the romance between Winston Smith (Edmond O'Brien) and Julia (Jan Sterling.) As a result, the machinery of the narrative clanks and grinds. Winston's sad fate is inevitable in the book as in the adaptation, but in the movie version that inevitability comes across as imposed, not just by the fascist government of Oceania, but by the filmmakers pulling the strings. Director Michael Anderson and George Orwell stand shoulder to shoulder with the torturer O'Connor (Donald Pleasence), all three together leading Winston step by step to his doom.

The most jarring example of this collaborative conspiracy of director and Party is Winston's experience in Room 101. In the book, you learn about Winston's fear of rats in a brief and relatively buried aside. This incident takes up more relative space in the film.

Defying party discipline, Winston and Julia meet for romantic idylls in a room they've rented above a curio shop. During one of their trysts, a rat creeps in and Winston erupts in hyperbolic fear and rage, panting and sweating, wide-eyed. By way of explanation, he reveals rats attacked his sister as a child. In the book, Orwell includes various flashbacks to Winston's childhood before the rise of the Party. But in the film this is the only reference; his past is nothing but rats. The scene might as well come with a big signpost—Foreshadowing!

Of course, Winston's fear of rats is vital to the second half of the film. After the Party captures him, the final torture he faces in the terrifying Room 101 is a cage with rats strapped onto his face. Threatened with the vermin Winston he screams at O'Connor, "Do it to Julia, not to me!" In betraying Julia, he betrays himself, and becomes fully brainwashed. He’s hollowed out, and filled only with bland patriotism and foggy but total loyalty to his tormentors.

The leaden detonation of that first rat scene can't help but call into question the second. Winston doesn't have a phobia—he’s given a phobia by the film so that his brainwashers will have something to work with. In the last scene, Winston meets up with Julia, who says that she, too, betrayed him in the exact same manner. Her torturers confronted her with something she couldn't bear, and she asked them to inflict it upon Winston, rather than her. All of which seems a bit too convenient. Everyone has an overwhelming phobia? Being faced with your phobia will always cause you to betray those you love to the Party? Isn't that a bit… glib? Convenient? Is this a bleak look at the evils of totalitarianism, or some sort of hacky paranoid melodrama?

Once you start to question the world-building in 1984, the entire film totters and cracks like a pasteboard stage set. In Kafka's The Trial, totalitarianism is convincingly confused, arbitrary and schlubby; administrators destroy people casually, through inefficiency and inattention. But the Party in 1984 isn't inefficient; on the contrary, it fulfills all of fascism's megalomaniacal promises of efficiency. Big Brother orchestrates the machinery of repression with preternatural skill. Even more than in the book, the spy-eye view screens in the movie are always monitored; Party members watch Winston's actions all day, every day. The state has the resources to organize elaborate entrapment schemes to encourage and punish not just Winston's treachery, but everyone's. O'Connor knows everything about Winston, allowing the Party to perform magic psychological transformation with rats. If the Party knows everything, who are we, mere viewers, to say, "You know, that seems darn unlikely"?

Orwell's intention was never realism. He was extrapolating from Stalin and Hitler and, perhaps, from his own experience as an agent of the British colonial powers. Oceania is a limited case; it's a vision of what the fascists and Stalinists wanted to do to the world, not a vision of what they actually did. Orwell, and Anderson, turn the Party into God. 1984 puts the artist in the position of fascism and says, okay, if fascism could create the world, this is what it would be like?

And yet Oceania is oddly bloodless. There is some fighting off-screen in the film and a bomb or two falls. But the atrocities of the Holocaust or the Ukrainian famine are not imagined, represented, or discussed. Big Brother has a power to brainwash individual white, middle-class writers—a power that’s beyond anything real totalitarians have ever managed. But as far as actual murders go, the Party's body count, at least from what we see, is far below that of actual genocidal regimes. The fascism of 1984 has infinite power to destroy souls. Perhaps as a result, it has relatively little interest in racking up dead bodies.

For 1984, the ultimate expression of fascism or totalitarianism is the stifling of elite freedom of thought, not the genocide of marginalized people. That's the context in which today protests against Charles Murray are seen as a slippery slope to fascism, while eugenic arguments made by Murray aren't seen as particularly dangerous. Orwell's Big Brother would stifle the speech of university professors. But Orwell's Big Brother doesn't have any particular desire to murder racial minorities. Murray is a stifled Winston Smith, while black people, and Jews, aren't even in the film version of 1984  (which renames the traitorous resistance leader to wipe away Orwell's suggestion of Jewish heritage.) If you take Orwell as gospel, the central danger of fascism is the threat to freedom of thought. Genocide is a secondary concern.

In real life, though, the technology to brainwash people's souls lags behind the technology to turn them into corpses. Oceania’s a fantasy; it constructs a world in which the worst thing that fascism can do is destroy intellectual rebels. Those who imagine themselves intellectual rebels may enjoy the conceit, and the paranoid thrill, of seeing themselves at the center of the universe. But real fascists don't need fear of rats or psychological gobbledygook to kill Jews, black people or Muslims. They just need guns and hate. Freedom of thought is precious, but you can take it from people without Room 101. Auschwitz works fine.