The Birth of a Nation Was Never a Prestige Picture

Nate Parker’s film is pulpy and entertaining, but runs an inch deep. 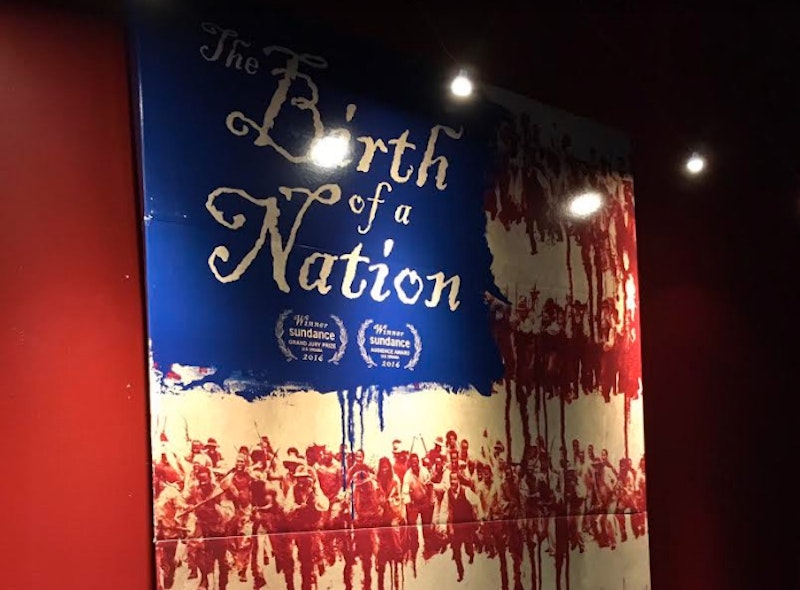 Above is a giant standing poster for Nate Parker’s The Birth of a Nation, prominently displayed at The Charles here in Baltimore. There must be tons of them sitting around across the country, and even more stored in the back. The movie bombed this weekend, but that’s not an issue for Oscar contenders. Writer/director/producer/star Nate Parker royally bungled the rollout of his movie in August when details of a rape trial in which he was acquitted surfaced, and media advisors decided to “get ahead of the story” and give as many mea culpa interviews as they could. But it didn’t work: Parker and The Birth of a Nation quickly became toxic and lost any chance at award nominations as his past cast a pall over every piece of coverage (the woman involved in the case killed herself in 2012). Parker further refused to address the case with any shred of grace as he indignantly scraped every piece of media coaching and appeared irritated and defiant with every softball interview that was booked. Oprah abandoned him! As The Wall Street Journal put it, “The stage seemed set for ‘Birth’ to coast from Sundance to the Oscars podium, and launch a national conversation about violence against the black community.”

Parker’s pissed, but the Academy should feel blessed that they don’t have to cynically use The Birth of a Nation to redeem themselves a year after #OscarsSoWhite. This is not a prestige picture, and further fawning like the pre-emptive standing ovations would just make everyone look silly and opportunistic. This is a really good pulpy movie, basically blaxploitation. We see the aftermath of a gang rape, a slave’s teeth being hammered out, and the careful stitching of whip wounds. It reminded me most of the original I Spit on Your Grave, where a woman hunts down and brutally tortures and kills her rapists. The Birth of a Nation is riveting and well-paced, and like an action movie, everyone is drawn in caricature: the white men are all fat and snaggle-toothed, straight out of a Ralph Steadman drawing; the white women are demure and stiff; Nat Turner (Parker) is the Christ-figure; and his family and fellow slaves are barely drawn at all—it’s very superficial but satisfying, as the story leads up to the last half hour when Turner organizes a slave rebellion, and a bloodbath ensues: beheadings, exploding skulls, knives slowly sinking into throats, limbs being blown off.

I empathized with Parker as an auteur realizing his dream project to rapt applause and a record distribution sale at Sundance, only to have it compromised two months before wide release. I don’t get his stance or his attitude during the media tour though, and I can’t imagine what it’s like for women and survivors of sexual assault to see this movie and try to keep the guy’s questionable past out of mind. But the Academy dodged a bullet here, because of course they would’ve taken the bait and nominated The Birth of a Nation for 12 awards next year, and it would’ve reflected poorly on an organization that doesn’t need any more bad PR. The Birth of a Nation is an excellent revenge flick, gory and pungent, but it runs about an inch deep, and it certainly doesn’t tell us anything new or address the current scourge of police brutality against black people in America.