In The Loop is very cynical, but still not cynical enough. 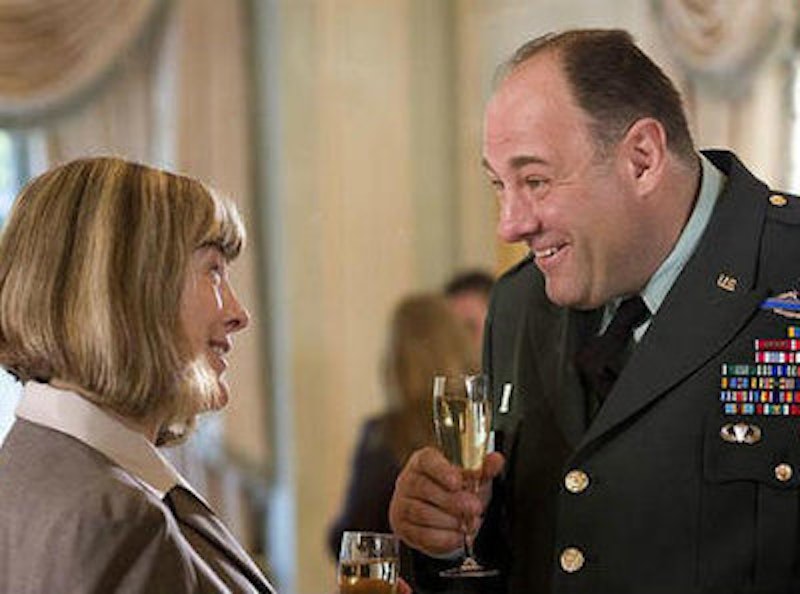 This is the 15th post in a series on political films. The 14th, on Election, is here.

When Hollywood is cynical about politics, it generally expresses that through narratives about corruption. From The Great McGinty (1940) to Bulworth (1998) politicians are portrayed as venal money-grubbers, selling their votes for a handful of silver. Politicians are rational economic parasites, who barter their services to the highest bidder. The system is set; the fix is in. The wise are wise to the wise.

Armando Ianucci's 2009 British satire In the Loop doesn't present politicians as corrupt—nor, for that matter, as wise. His vision is grimmer. Rather than cannily trading perks for cash, the political appointees, functionaries, and apparatchiks in In the Loop trade their influence and principles for the chance to sit at the table with a slightly more powerful bureaucrat. The wheels of power are greased, not with money, but with shallow careerism and bland cowardice.

The film is a parody on the run-up to the Iraq war in Britain and the United States, particularly on the bureaucratic intelligence maneuvering to make a case for intervention. The pro-war forces are bullies who nakedly and shamelessly manipulate evidence. The Prime Minister's Director of Communication, Malcolm Tucker, played with profane relish by Peter Capaldi, spews curses and threats as he abusively advances the brief for violence. "Just fucking do it!" he screams at the British ambassador to the UN who is not sufficiently gung-ho for war. "Otherwise you'll find yourself in some medieval war zone in the Caucasus with your arse in the air, trying to persuade a group of men in balaclavas that sustained sexual violence is not the fucking way forward!" Tucker's soft-spoken war-mongering American counterpart Linton Barwick (David Rasche), changes documents to suit his purposes with unflappable disregard for truth or decency. "In the land of truth, my friend, the man with one fact is king," he assures a flunky. Why gather additional intelligence when you already know who you want to bomb?

The forces for war forge ahead by the power of pettiness; the forces for peace crumple in on their own petty weaknesses. Liza Weld (Anna Chlumsky), the US staffer who writes an intelligence report accurately pointing out that an invasion would be disastrous is terrified that her inadvertent honesty will wreck her career, and spends the entire film quietly looking for a way to sell out. Lt. Gen. George Miller (James Gandolfini), blusters about duty, honor and the evils of war, but is easily outmaneuvered, not least by himself. British Minister for Internal Development Simon Foster (Tom Hollander), for his part, can barely even muster the wherewithal to bluster, as he burbles one day about how war is "unforeseeable" and the next talks haplessly about "climbing the mountain of conflict. Hollander turns in a quietly hilarious impersonation of politician as feckless dish mop, his every lip quiver and stutter conveying the indecisiveness of a man who can't even figure out where his soul is, much less how to sell it. Undersecretary Karen Clark (Mimi Kennedy) is alone in sticking to her principles—for all the good it does her.

The real brilliance of the film is that its villainous conspirators have no particular motive—and really no particular rationality. Conspiracy theorists tend to invest their bugaboos with hyper-competence; "Let's dispel with the fiction that Barack Obama doesn't know what he's doing," as Marco Rubio famously said, over and over. But in In the Loop, none of the people pushing for war has a master plan or any nefarious means by which tens of thousands of dead will lead to personal enrichment or power. They're just ignorant shitheads, ruthlessly, vindictively following "the line" handed down to them by other ignorant shitheads because they want their next paycheck, and because if you have the power to thwart your enemies, it's fun to do so, especially when, unlike you, they actually care.

In the Loop gleefully subverts Hollywood's obsession with hyper-effective politicians, whether corrupt (All the King's Men) or noble (The American President). But it continues the almost unbroken tradition of films that’re unable to represent genuine differences of political opinion. The bureaucratic navel-gazing careerism of political appointees and functionaries is entirely believable; such people are, after all, hired to be loyal and obedient, not to set policy. Those who made the decision to go to war in Iraq were elected—and in In the Loop, they never appear on screen.

Tony Blair and George W. Bush lied and manipulated intelligence in their rush to war. But they did so because they sincerely believed that rushing to war was the right thing to do. Saddam Hussein was a bad guy, they thought; he was involved in terrorism, a war would be quick and easy, and the world would be a safer place once he was removed. Many of these presuppositions were wrong, and mixed up with a confused desire for vengeance after 9/11, messianic notions of American destiny, and a swaggering desire to use all those military toys. The reasoning for war was confused, ugly, bigoted, and ignorant. But the reasoning did exist. People believed in it.

In the Loop doesn't show that reasoning though, preferring to focus on the failings of those at a lower pay grade. It's a brilliant dramatization of the self-deception and low-level ambition that leads people to betray themselves and the public trust, with no corruption needed. But it also, tellingly, avoids showing that thing which you'd think would be the essence of democracy—a genuine debate about the issues.

Such debates, in which both sides press a sincere viewpoint, however flawed, is virtually absent from the political films I've watched in this series. Every campaign season, pundits, commenters, and citizens say they want a campaign about substance. But when people go to the movies to see a film about politics, what they pay to see is a horse race, or a one-sided denunciation of inequity, with the good people fighting sincerely, and the bad transparently cynical in their pursuit of power.

In the Loop is a delightful, and insightful, variation on that. But its cynicism still glides lightly over a perhaps more depressing truth about democracy. People often believe their own bullshit, and the worst atrocities are committed not by the self-interested, but by those with the country's best interests at heart.