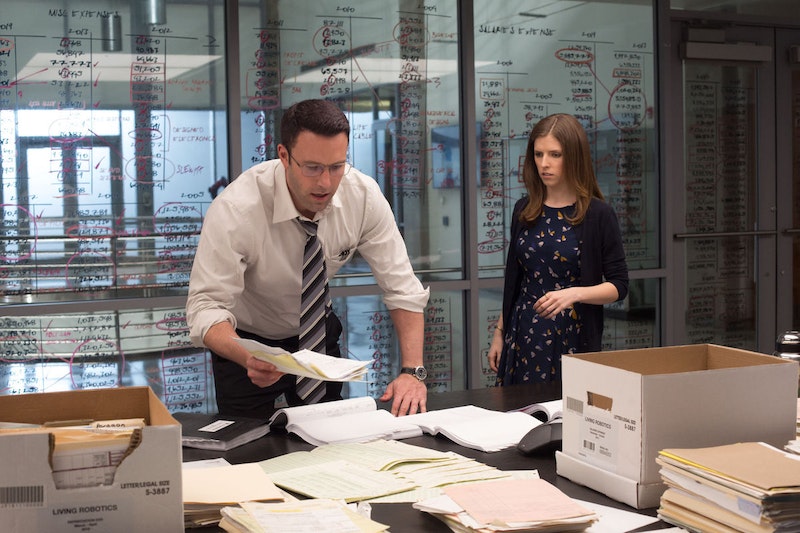 The Accountant has as its center a really great idea: What if Jason Bourne were on the autism spectrum, and also good at doing taxes? It presents that idea and executes it reasonably well, with the help of a top-flight cast and a smart director (Gavin O’Connor, best known for Warrior). It’s just a shame that the film feels the need to surround this idea with about three times as much plot as it needs.

Ben Affleck stars as Christian Wolff, an autistic man who appears to work as a small-town CPA—although he’s also got a lucrative sideline in doing accounting-related work for various international crime syndicates (think of that early Justified episode where Alan Ruck played a drug cartel's ex-accountant). And because his military-officer father rejected special education in favor of teaching his son to fight and shoot his way out of trouble, Wolff is also adept at both rifle marksmanship and hand-to-hand combat.

The plot concerns Affleck brought in to look at the books of a seemingly above-board robotics corporation (led by John Lithgow) after an underling (Anna Kendrick) discovers a large accounting discrepancy. At the same time, there are plot strands involving a rival group of assassins (headed by Jon Bernthal); mysterious flashbacks involving both Affleck’s mysterious childhood, his prison mentor (Jeffrey Tambor) and his mother's long-ago death, and a Department of Treasury official (J.K. Simmons) and his underling (Cynthia Addai-Robinson) trying to figure out just who this accountant guy is.

And that’s the big weakness of The Accountant—there’s too much plot here for one movie. For instance, the entire Treasury Department investigation subplot—even with an outstanding actor like Simmons—could’ve been dropped completely to no detriment of the film, especially its opening scene. I was reminded of the framing device in Burn After Reading, also with Simmons—one that has very little bearing on the main plot of the film.

Speaking of the plot, it’s another recent movie with a “shocking” plot twist that’s pretty easily guessable relatively early in the movie. No, it’s not quite as predictable as the twist in last week’s The Girl on the Train, but few are. Affleck gives a decent performance, even if it features the actor repeatedly exercising on-screen. It’s certainly a better action performance than the actor’s recent Batman v. Superman role, although one gets the sense Affleck was jealous of his buddy Matt Damon’s two most famous roles and decided to combine them both—the math-problem solving of Good Will Hunting and the repetitive ass-kicking of the Bourne movies—into one part.

Kendrick is underused; at one point she’s left in a hotel room and the movie pretty much forgets her there as well. It’s always good to see the likes of Lithgow, Jean Smart, and even The Americans’ Alison Wright, in a small but pivotal part.

I’m interested to hear what the autism community thinks about this film. Will they find it offensive in depicting an autistic man as violent? Will they appreciate the use of the condition in an otherwise conventional action plot? I can see disagreements, although a woman I spoke with afterwards, the mother of an autistic child, said she loved it. I give the production credit for actually using the word “autistic”; various sitcoms and cop shows in recent years haven’t, for whatever reason.