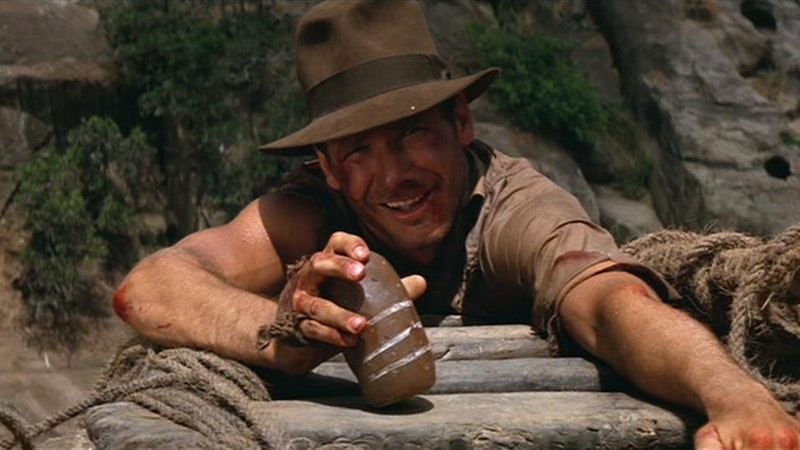 I watched Raiders of the Lost Ark recently for the first time in probably 30 years. My son wanted to see it, and I had fond memories of it, so my wife and I figured what the heck. It can't be that bad, right?

Wrong.  My son loved it, of course; hairs-breadth escapes, chase sequences, hairs-breadth escapes, chase sequences, monkey reaction shots—he was happy. For adults though, there's nothing there. The special effects rush on with a fatuous remorselessness, while the actors stand around looking pretty and lightly stunned (Harrison Ford; Karen Allen as the love interest) or else hamming up their ethnic stereotypes for all they're worth (Paul Freeman as the evil Nazi; John Rhys-Davies as the good Arab second banana). The chase sequences are dazzlingly fluid… but the very fluidity robs them of much of their joy. The characters seem like they're locked in a video game… or, perhaps more accurately, in a giant slick advertisement for their own movie. It's a film as its own trailer.

If it really were just one big, meaningless chase sequence, the film would simply be boring. Unfortunately, the shards of plot rather helplessly touch on real-world issues, in the context of which the glibness becomes actively offensive. Indiana Jones is portrayed as brave and true for looting his way across the world's lesser cultures… not excluding Judaism, which is portrayed as a kind of handy magic totem, for summoning special effects and banishing Nazis.  Steven Spielberg himself is Jewish, of course—which makes the Orientalism directed at his own people either more forgivable or more utterly, stupidly shameless, depending on how you want to look at it.

My wife and I were sufficiently vocally dubious throughout the feature that our son picked up on some of the problems as well. At the end of the film, he looked at us and said, "Indiana Jones is kind of a bad guy, right? He robs tombs." We agreed that this was the case. It's nice to pass on our cranky liberal values… though the boy still liked the movie. Maybe if he watches it again in 30 years he'll change his mind.