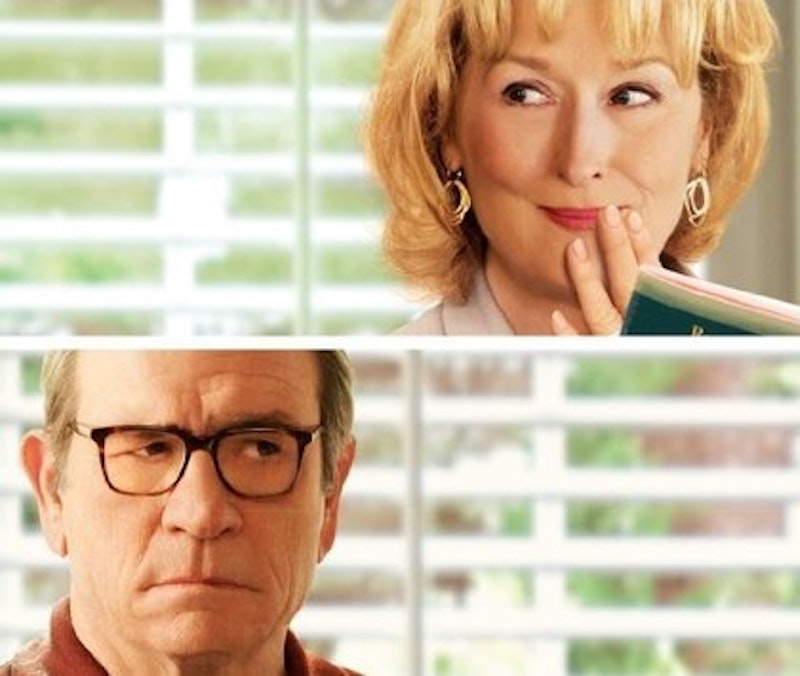 Last weekend I saw Hope Springs with a girlfriend. This is exactly who you should see the film with, because if you see it with a spouse or someone you’re dating, there will be many awkward moments as you compare your own relationship to the one on the screen. Don’t fall down that rabbit hole. Girlfriend movie. Got it?

Director David Frankel (Devil Wears Prada, Sex and the City, Marley and Me) has gone full-on Nora Ephron on this romantic comedy. Okay, technically it’s listed as a “comedy-drama-romance” which doesn’t necessarily mean it is funny, dramatic or romantic, but sort of a hodgepodge of all three. It’s a tearjerker. I’ll give it that. It has that Ron Howard film feel, especially during the over-the-top ending.

The film tells the story of a couple named Kay and Arnold (Meryl Streep, Tommy Lee Jones) who’ve been married for 31 years. Life is ho-hum—from his accounting job to her daily preparation of his bacon and eggs. It’s supposed to be set in modern times, but honestly, give her an apron and it would be the 1950s. She doesn’t even have a job or any seeming interests other than injecting some romance back into her almost unbelievably boring marriage at all costs.

Kay sees an ad for a weeklong couples seminar (in Hope Springs, Maine) to rekindle romance and signs them up. At first the curmudgeonly Arnold says he won’t go, but he gets on the plane at the last second and they embark on the journey that comprises the film’s plot.

The marriage counselor is played by Steve Carell. Whatever you do, do not go to see this film if you are a Carell fan from his days on The Daily Show, or the Office, or in funny movies like Anchorman. He is not, ever, in any way funny in this move. I wanted so badly for him to be funny. Even moments that could’ve been funny weren’t because he seemingly was hell-bent on proving he can play the straight part. (Carell fans can only hope that he’s got that out of his system and can choose a script that lets him use his God-given talent— humor!—on the next film).

Meryl Streep and Tommy Lee Jones are—of course—flawless in their performances. The emotional nuances, physical embodiments of their characters, and chemistry between them onscreen leave nothing to be desired. But something about the film nagged me. Was it the fact that her 50s housewife character didn’t fit in with modern times? Maybe. Was it that he is so curmudgeonly that it he became a caricature? Possibly. But I think it might have been that the story was so predictable. Of course it feels like a journey as they have little fights, go on dates, try to have sex again for the first time in five years and whatnot, but (spoiler alert) it’s certain everyone who watches this film is probably realizing that no director would take us through 100 minutes of film to have a couple get divorced at the end.

In essence, the film, as a result of the writing of its plot, is one-dimensional. Each of the three characters would’ve benefited from story lines that didn’t revolve completely around The Marriage. In fact, because of the way the story is so centralized around three people, the movie would’ve made a better stage play than film.