Sons of Anarchy Is More of the Same

Yep. Just another episode of kind of, sort of pretty okay television. I guess. Maybe. 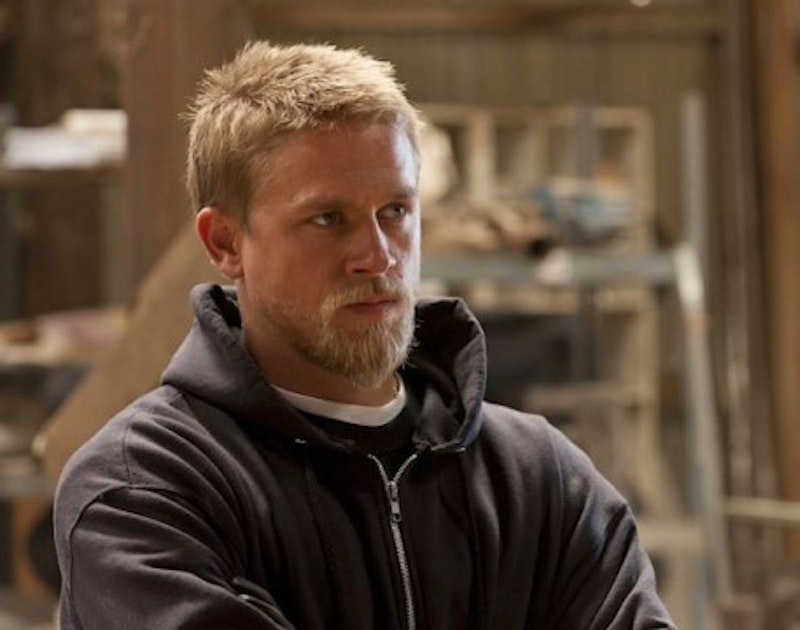 When I last wrote about Sons of Anarchy, season four had just ended with a resounding thud. After a very uneven season three, which found the outlaw biker gang SAMCRO in Ireland, looking for Jax Teller's kidnapped son, and then finally killing off ATF agent Stahl, avoiding major prosecution in the process, season four looked to start over. Indeed the opening scene—with Jax, Clay and other SAMCRO members walking out of prison after their 14-month sentence—were a reminder that old threads had been tied up. Finally, we could get back to what this show was really about: Jax Teller finding out that his uncle, Clay, and his mother, Gemma, had in fact killed off his father years ago, and taken control of the biker gang that he founded. Hamlet, yes. But after three seasons it was playing more like rip-off than re-telling.

With season four, old letters had been had handed off to Jax's wife, letters that implicated both Clay and Gemma in the murder. Clay stops at nothing to keep Jax from finding out, including shooting Piney, one of SAMCRO's "first nine," and trying to kill Jax's wife. Add in some sub-plots involving a couple of SAMCRO bikers colluding with the cops, a risky alliance with a Mexican drug cartel, and another developing RICO prosecution, and the season looked like it would end in an all-out massacre, with Clay and a couple of other secondary characters all killed off in one episode. And then… nothing. In probably the most disappointing season finale I've ever watched, executive producer Kurt Sutter decided the Mexican drug cartel would in fact be CIA operatives, looking to leverage SAMCRO against the IRA (all of which makes about zero sense). To do this, the CIA needs Clay alive, as he's the only one the IRA will negotiate with (of course). It was an absurd contrivance designed to reveal Clay's treachery without having to follow through on the consequences of that reveal. So even though Jax has found out Clay killed his father (and Opie has found out Clay shot Piney, and Otto has turned state's witness against Bobby and on and on), they'll be no Shakespearean ending.

Reaction to the finale was so harsh that Sutter took to his blog, ranting against critics who he says just don't get it.

The Wire, we ain't, nor do we aspire to be. For the record, SOA is an adrenalized soap opera, it's bloody pulp fiction with highly complex characters… My challenge as a showrunner, season after season, is to balance art and commerce. How do I keep the show rich, complex and authentic and yet entertain the fuck out of people? It sounds easy, but it's not. Trust me, it would be much easier to write a straight ahead drama to please the critics. You guys are easy. But I'm not writing the show to convince people how brilliant I am. I'm writing it to excite, thrill and engage an audience. And I can only hope that my talent as an artist and producer shine through.

Sutter's defense here is fairly pathetic. Entertaining and nonsensical don't have to go together, no matter what Hollywood and it's summer blockbusters would have you think. You can blow plenty of things up and still tell a story that makes sense. Sutter writes that Fox Chief Executive Peter Chernin worried no one would watch a show about "a bunch of dirtbag bikers."

...a straight up drama, no matter how well done, wouldn't have lasted more than a season... to balance the danger and brutality of the world, the show needed to be entertaining and, dare I say, fun.

And while that is probably true it doesn't actually say anything about the show's problems: why, for example, Sutter works so hard to cancel out wonderfully affective acting through hyper-ridiculous plot twists. "How do I keep the show rich, complex and authentic and yet entertain the fuck out of people?" If Sutter had actually figured that out maybe Sons of Anarchy would be returning this season with a bold new direction—lacking some of its main characters but no doubt stronger for it. Instead season five looks like more of the same: threats from the cops and rival gangs, in-fighting and raunchy sex scenes, etc. For a show that's set to have a season six and seven as well, more of the same just won't do.