Chaplin’s The Great Dictator Resonates More Than Ever

It’s impossible to overrate this 1940 masterpiece. 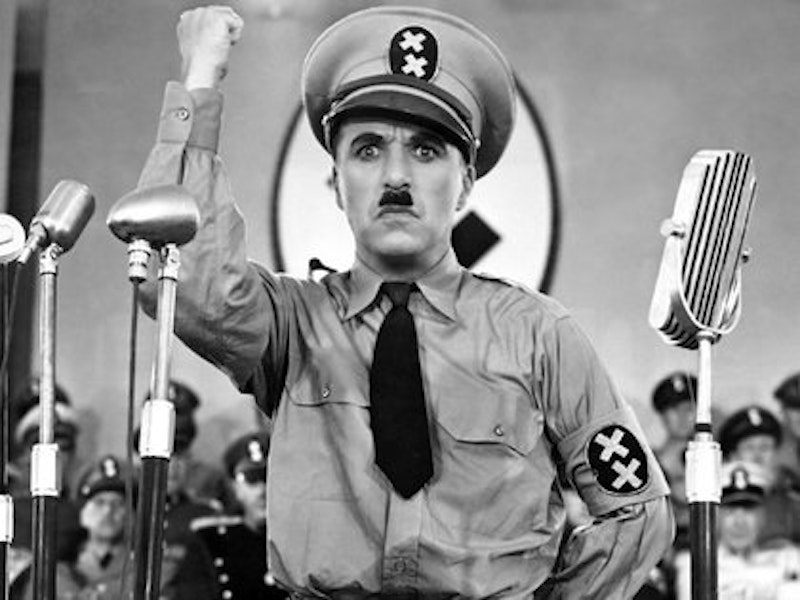 There aren’t many films more poignant or powerful than Charlie Chaplin’s 1940 The Great Dictator. Produced before the U.S. was involved in WWII and heads of state were still appeasing Hitler, Chaplin’s first talkie and most commercially successful movie is indisputably his greatest work and one of the most moving films ever made. At a time when Chaplin’s international popularity was enormous and his influence global, he was in a position to speak to millions of people and be heard loud and clear. The full extent of the Nazis’ atrocities were still unknown, and the idea of death camps and institutionalized murder were unheard of—Chaplin himself said a lampoon of Hitler wouldn’t have been possible if they were. Knowing only that the Jews, Poles, blacks, and homosexuals were systemically oppressed in Germany, Chaplin ridiculed and reduced to ashes the philosophy of the world’s worst madman more eloquently than anyone before or after. The fact that so many more were killed and tortured in the five years that followed is enormously distressing, because The Great Dictator isn’t only a classic piece of satire, it’s a humanitarian triumph.

I caught a revival showing at The Charles in Baltimore the other night, sparsely attended by about two dozen senior citizens, film buffs, a fighting couple or two, MICA students, and absent-minded gigglers. So far removed from its fraught context, and the numbing anxiety of impending war, one could only feel an echo of the buzz it must’ve created upon release in October 1940. Audiences loved it, but naturally, critics dismissed the climatic final speech as pandering and cloying. I can’t imagine what they’d say about The Newsroom or Good Night, and Good Luck. Chaplin’s six-minute speech directly to the audience is the rocket fuel that makes this film so moving: one of the biggest stars of his time, in a work made solely with his money and reputation on the line, delivering an impassioned monologue on the tragic absurdity of fascism, oppression for its own sake, ethnic cleansing, and the narcissistic desire of certain men to dominate out of spite.

Even more than what it condemns, the speech implores us to reconsider our attitudes in a post-industrial age, where we have the technology and the ability to “make this life a wonderful adventure” instead of a race into the muck. “We have developed speed, but we have shut ourselves in. Machinery that gives abundance has left us in want. Our knowledge has made us cynical; our cleverness, hard and unkind. We think too much and feel too little. More than machinery, we need humanity. More than cleverness, we need kindness and gentleness. Without these qualities, life will be violent and all will be lost.” Chaplin’s words are even more relevant today then they were 72 years ago, when more and more we revolve around consumption rather than connection. Not a peep was heard through the theater during the Jewish Barber’s final address.

Perhaps the power in The Great Dictator lies in its unequivocal and unimpeachable humanitarian stance—it’s hard to imagine petty partisan bickering over the Nazis today. No one can make the argument that Chaplin’s speech is cloying or overwrought: it is bold, brave, and beautiful. Nothing else. Maybe it’s our abundance of information that makes such ultimate statements so elusive these days— widespread condemnation of Japanese-Americans being interred or Wilson jailing journalists would’ve made Chaplin’s soaring words a little more shaded. And of course people were simply more impressionable and easily persuaded back then— now, almost everyone is entrenched in an opinion, and speeches like the Barber’s are delivered to the already converted.

Saddest of all, al-Qaeda and the Taliban, the Third Reich of our time, are not the indisputable madmen they were in 2001. In Iraq and Afghanistan, we’ve been eager to catch up as the world’s most evil empire, having totally squandered all the good will we had that day, and then some. Who could’ve imagined the terrorists would’ve won so much, draining our resources in two wars of attrition, and exciting the most contemptible racist and ignorant segments of our population? When we don’t acknowledge how royally we fucked up the past decade as humanitarians, even the best of us look plain foolish. The Great Dictator is a distant echo of a time when denouncements of evil were cut and dry. These days, things aren’t as clear.