Breaking Bad has gotten just a little sloppy in its last season. 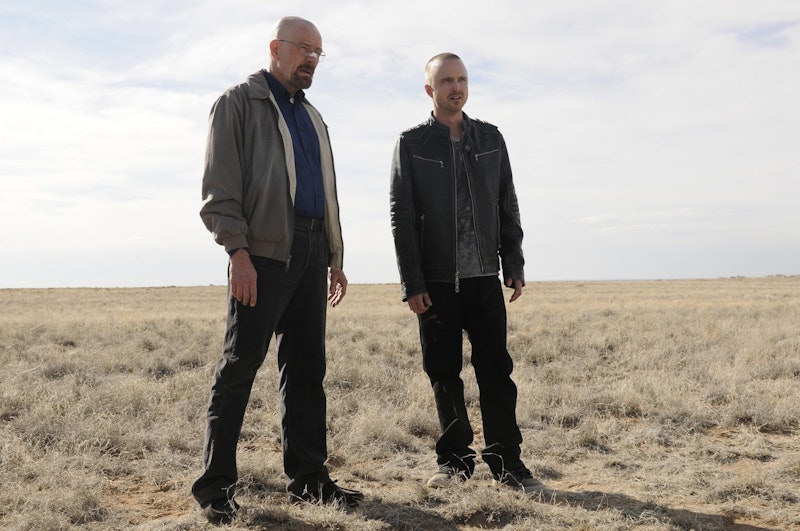 Now that we're halfway through Breaking Bad’s fifth and final season—the mid-season finale aired on Sunday, with the final eight episodes due sometime next year—I can finally write about a few problems I've had with the show thus far. Don't get me wrong, I still think Breaking Bad is the best TV drama (cable or otherwise) of the past decade, but the fifth season has taken certain liberties with its characters that don't make a lot of sense to me, and that's something that a show that's all about careful, nuanced character study can't afford. The problem stems, I think, from this somewhat longer and broken-up season. Bryan Cranston announced the news before the premiere: "We’re splitting it. We’re going to shoot the first eight, then take a four-month production break, then the rest will air next year." Exactly why this was decided I'm not sure, but the pacing has certainly suffered. There's no more slow-build; handwringing is kept to a minimum. And for a show that's been largely about handwringing, that's a problem.

Season five picks up right where season four ends. Kingpin Gustavo Fring is dead, the meth lab has been torched, and Walt and Jesse are back to square one. After enlisting the help of Mike Ehrmantraut, Fring's former enforcer and right-hand man, the three set off to tie up loose ends, including destroying Fring's seized computer via a giant magnetic pulse. Season five, so far, is full of McGuyverish moments like this one. A few episodes later we see Walt, one hand zip-tied to a radiator, burn through his restraint using the chewed off, sparking wires of a Mr. Coffee cord. Oh, and let's not forget about the train heist or Walt's idea to forego a permanent meth lab in favor of a mobile set-up, i.e. cooking meth in houses tented for fumigation (which, really, is pretty brilliant).

All of this is fine. In fact I like the action sequences, I just don't like certain contrivances used in getting to those action sequences. Take, for example, the aforementioned burning-through-the-zip-tie scene, where we have to accept that Mike, a man who for a couple of seasons now has been nothing but calm, calculated and completely thorough, would decide to leave one of Walt's hands free when tying him up. Or, in the episode that follows, when Walt brings Mike his go-bag so that he can leave town, and an argument ends with Walt fatally shooting Mike in the stomach, we have to accept that Mike, say, wouldn't have had his own gun drawn, or wouldn't have checked his go-bag to see that his second gun was still there (frankly, that he would trust Walt to deliver the go-bag in the first place is also extremely suspect).

Ten minutes before his death we see Mike escape from a public park despite the fact that the police have him surrounded. As Daniel Fienberg put it, "Mike is superman when they need him to be." And while I don't have a problem with Walt killing Mike, I have a huge problem with the sort of sloppy character writing that went into that scene. Again, here's Fienberg, talking to Andy Sepinwall on the most recent Firewall and Iceberg podcast:

The show, sort of, for a very long time, one of the things that distinguished it was that it didn't take shortcuts, it didn't require you to sort of rationalize things in your head, because the characters were having all these discussions for you and the show was taking you through everything step-by-step… That to me feels sort of structurally off from the way Breaking Bad set itself up.
Likewise we have Jesse, who in past seasons has tended to handle tragedy by locking himself in his house and, usually, getting high for days, is here, a few episodes into the season, distraught over the shooting death of a young kid who just happened to witness the train heist. Yet, his own moroseness is played down, so that we get a scene shortly thereafter with him eating a very uncomfortable dinner with Walt and Walt's wife Skyler, cracking jokes and just generally trying to break the tension. It's played for laughs and it's not that I don't like the scene, it's that I don't like how fast we get to that scene. Again, it's a pacing problem, trying to do too much in too few episodes. I like that the kid's death was the catalyst for Jesse deciding he wants out of the business altogether, but I would have preferred to see Jesse getting completely blazed and sobbing in his bedroom for an episode-and-a-half first. Maybe the writers decided we've seen it all before, but that kind of attitude drags a show down. We've seen it all before, therefore we know that's how Jesse would handle a situation like this, and yet he doesn't.

Symptomatic of all of this bad pacing is the two, nearly back-to-back montages we get in the half-season finale, one featuring the prison murders of Gus Fring's remaining crew (Walt has them killed off knowing they could flip on him) and another featuring Walt and newcomer Todd cooking up hundreds of pounds of meth and earning more money than Walt could have ever dreamed. The montages are beautifully shot and put together, but to have two of them like this in one episode, basically running on the heels of each other, shows that Breaking Bad is trying to cram in more plot than it has room for, and so the characters suffer accordingly.

Granted, the finale, with Walt's brother-in-law (and newly-promoted DEA ASAC) discovering Walt's involvement in Gus Fring's meth operation is one of the most stunning (and, obviously, frustrating) cliffhangers I've ever seen, so I'm sure that the show's final episodes won't disappoint. It's just sad to see a show this amazing taking shortcuts it doesn't need to.