With a coupla cool cats. 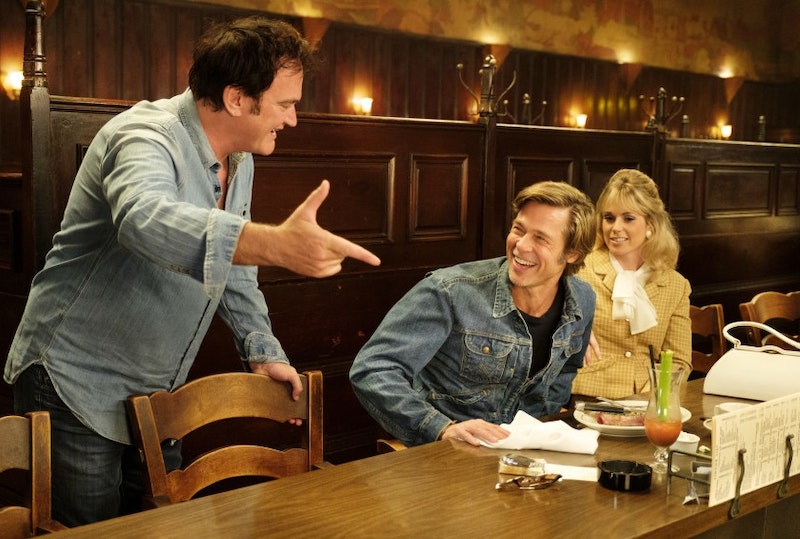 Quentin Tarantino is the Great Bullshitter, if we define a bullshitter as somebody who can keep you listening while they say pretty close to nothing. Tarantino has a gift of cinematic gab unique to himself, and he brings it to a height in his new film, Once Upon a Time in Hollywood. The two hours and 45 minutes amble along with the heroes, following them through a couple of tall tales and an on-set mini-drama. Interesting things happen, but not big things and they add up to little. That’s until the last third, when a big thing does swoop in. One of America’s more nightmarish real-life episodes is replayed. But this time it’s a shaggy dog tale. The terrible event recorded by history never occurs. Instead there’s a fight scene, one that’s horrific but goofy. A happy ending follows. No one in the movie has changed much, unless you count physical wear and tear.

Yet Once Upon a Time is riveting and satisfying. Watching it, the audience had the stillness of people who’ve forgotten how to cough. They lasted like that for almost three hours, but afterward they didn’t applaud. So Once Upon a Time may not be too filling. It’s a 10,000-pound soufflé, which is probably too much. Still, I didn’t know something truck-size could taste this good. I can’t explain this thing to others. But I marvel that it exists, and I recommend it to anybody who doesn’t mind a long-drawn-out experience geared to distinct tastes, specifically: an interest in late-1960s Los Angeles and associated cultural product; and the enjoyment of Leo DiCaprio and Brad Pitt doing what they do. If you can sign up for these things, let the movie go to work.

DiCaprio stars as Rick Dalton, a TV actor trying to hang on to his career. Pitt costars as Dalton’s buddy, stuntman Cliff Booth. Booth has devoted himself to looking after the guy he used to do stunts for. The two of them are declining together, with Dalton kicking at their distressed fortunes while Booth is more relaxed about things. DiCaprio’s role ingeniously gives him a range of emotions to play, both as Dalton and as the character that Dalton plays on a TV pilot. Pitt’s role is well suited to showing off an unflappable, weathered, limber, easily resilient cool guy who cares about little but still comes out on top. Together with acres of high-quality period re-creation, these factors guarantee that looking at the screen pays off. Tarantino adds some of his dialogue quirks and trademark scenes of quiet tension, plus his brutality with a semi-slapstick edge. But he manages his old fascination with less reliance on these devices. Whereas costumes (Arianne Phillips) and set dressing (Nancy Haigh) and production design (Barbara Ling) do more than usual to carry the film.

Margot Robbie doesn’t have much to play as Sharon Tate, a sweet girl who may or may not get knifed. No one has much to play except Bruce Dern, who does a great job with his scene, and Margaret Qualley, who’s resourceful in the role of a crazy sexy girl. Mike Moh gets a sizable turn as Bruce Lee, but this Bruce Lee is a clown headed for a pratfall, a flat role that Moh invests with noise more than anything else. Otherwise the screen is filled with people being useful and not memorable. For such a busy canvas, the action still comes down to the two guys, and to the lost city of Los Angeles in 1969.