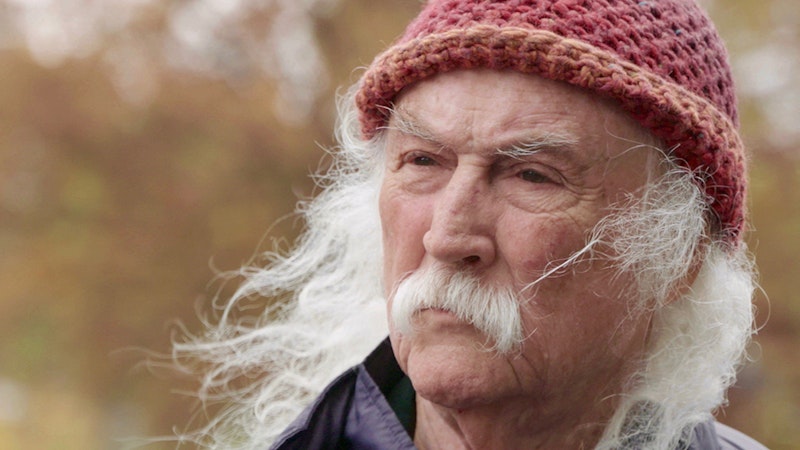 David Crosby: Remember My Name: A-

This week brings a pair of outstanding documentaries about legendary men of the 20th century looking back, at the end of their lives, with varying degrees of perspective and regret.

David Crosby: Remember My Nametakes a retrospective look at the rock star's six-decade career. It begins with a boffo anecdote about a drug-addled bathroom run-in with John Coltrane, but there's a lot more than just drug tales. There's plenty of archival footage from the performer's years with The Byrds, and Crosby, Stills and Nash, with and without Young, along with outstanding music that you don't necessarily have to be a boomer to enjoy.

But it's all cut with a heavy dose of melancholy, with the 77-year-old Crosby both obsessed with his own mortality and shocked that he's made it this far. The musician, who continues to tour and record, is also regretful at all the relationships he's blown throughout his life, including with most of his famous musical collaborators. We see him touring some key locations from throughout his career, including the actual house that was the inspiration for the song "Our House." (Crosby is in another rock documentary this summer, Echo in The Canyon, in which he was among the more compelling of many interviewees.)

A.J. Eaton originated the project and is credited as director of the Crosby doc, but the producer and interviewer is Cameron Crowe, who’s finally able to use his musical and journalistic expertise for something cinematically positive for the first time since Almost Famous,almost 20 years ago. Crosby was one of the musicians Crowe reported on in the 1970s. While respectful, Crowe draws out a lot of outstanding material from his subject. It isn't like that Netflix doc on Quincy Jones last year, that was directed by Jones' own daughter and likely left anything interesting he said on the cutting room floor. Crosby’s the rare rock star of a certain age who's interesting on Twitter, and even more interesting when he's actually interviewed.

It’s not totally complete; for one thing, we don't get the backstory of how exactly Crosby came to be the sperm donor for Melissa Etheridge and her then-partner in the late-1990s. But the film functions as an epitaph for a performer who remains very much alive.

Mike Wallace Is Here: B+

Footage shown in Mike Wallace Is Here, directed by Israeli filmmaker Avi Belkin, also asks its late subject about his epitaph. Wallace wasn't quite as eager for self-reflection, although we do learn that Wallace never liked being subject to the sort of tough interviewing for which he was himself famous. Belkin's film, arriving now after a festival run last winter and spring, assembles a massive amount of archival footage to take us through the entire career of Wallace, who died in 2012 at 93.

It begins and ends, strangely, on interview footage with Bill O'Reilly, but we also see the newsman interviewing men of much greater significance, from presidents to foreign dictators to Hollywood royalty. Watching Barbra Streisand curse at him is a highlight, as are his sparring sessions with the likes of Johnny Carson and Larry King.

There are a few significant takeaways here. Public confidence in the news media at an all-time low? They've been saying that since the early-1980s, at least. The same with the notion that the news media is elitist and out of touch, which isn’t merely a Trump- or even Bush-era phenomenon.

The film doesn't shy away from the negative, including Wallace being sued by General William Westmoreland, and the unpleasantness with Big Tobacco in the 1990s that was the subject of Michael Mann's classic film The Insider. We see Wallace in interviews expressing regret as to how that was handled, though we get no indication of the newsman's long-stated antipathy for Mann's movie. We also see Wallace, over the course of several interviews, slowly admit that he battled depression and once attempted suicide.

It's been a strong year for documentaries so far, but the Crosby and Wallace films, along with Apollo 11and City of Joel,are among the best.