Fear Does Not Exist in This Dojo

The Art of Self-Defense is a dark comedy with no agenda. No wonder some critics hate it. B 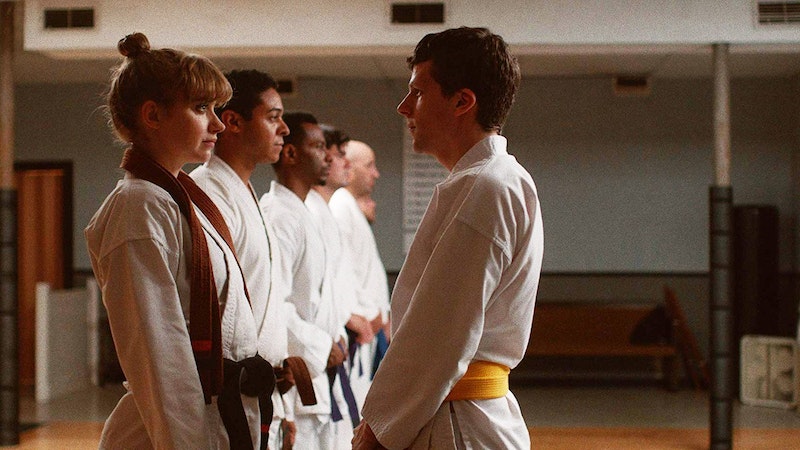 Why? Why do I do this to myself? Why do I continue to give Jesse Eisenberg, my number-one “problem actor,” chance after chance? I skipped Riley Stearns’ The Art of Self-Defense at the Maryland Film Festival this year because it starred Eisenberg. The slug line was enough for me to pull an El Paso: “Eisenberg plays a man who is attacked on the street and enlists in a local dojo, led by a charismatic Sensei (Alessandro Nivola), in an effort to learn how to defend himself.” But a couple of months later, I saw a trailer and was intrigued. I thought okay, it’s Eisenberg doing Eisenberg—the man has zero range—but this looks dark and fucked up enough to warrant a matinee. I’m glad I caught it: The Art of Self-Defense is no Eisenberg revelation, but it’s a strange and surprisingly gripping black comedy that’s far more challenging than typical MOR arthouse fare.

This movie won me over despite some usually fatal flaws: stilted, deadpan dialogue closer to Janicza Bravo’s awful Lemon than the more common comparison of Yorgos Lanthimos. Is every movie that’s moderately violent with a dark sense of humor automatically “Lanthimosian”? No, The Art of Self-Defense is too cute, and its “points” are too obvious and plainly stated, a world away from the obscurities of The Killing of a Sacred Deer, The Lobster, and The Favourite. Stearns is not nearly as cruel as Lanthimos or Ari Aster, whose Midsommar is certainly a kind of black comedy (and what makes it great is that it’s a one-joke movie, and the final shot is its punchline). And although Stearns has said there’s some autobiography in the script (he took up jiu-jitsu a few years ago to get in shape, not because he was mugged), the critique of “toxic masculinity” is mostly incidental—this is a world away from Fight Club. Besides, a movie about karate and self-defense is bound to touch on masculinity—how can it not? He’d have been criticized for avoiding it if he had.

David Edelstein’s pan for Vulture is nonsensical. He writes, “The karate school seems like an extension of that. It’s a universe of predators where the most accomplished bullies go at night and spill one another’s blood. Given that karate is often viewed as a higher form of self-defense (the attacker’s energy is used against him or her), Nivola’s warmongering Sensei seems lousy at what he does.”

Edelstein continues: “Maybe if Sensei’s worldview had been seductive instead of backward and repellent, The Art of Self-Defense wouldn’t have been so tedious. Why satirize something that has no stature to begin with?”

Who knew Edelstein cared about karate? And who in their right mind walks out of this movie thinking it’s a satire of karate? “Toxic masculinity,” sure, but this isn’t a message movie. Edelstein’s looking for an agenda and a philosophy that isn’t there. This grudge against “mean” movies is such a stupid byproduct of the Trump era—if a film doesn’t provide liberal humanist bona fides with its violence and “punching down” (another moronic criticism of comedy), it is branded mean, disturbing, improper. Take a deep breath and cackle at Casey challenging Sensei to a hand-to-hand fight to the death only to shoot him in the head. The Art of Self-Defense is by no means perfect, but it’s very good, and that’s easily the funniest ending I’ve seen in a movie all year.