There's some good storytelling, but comedic punch is missing. 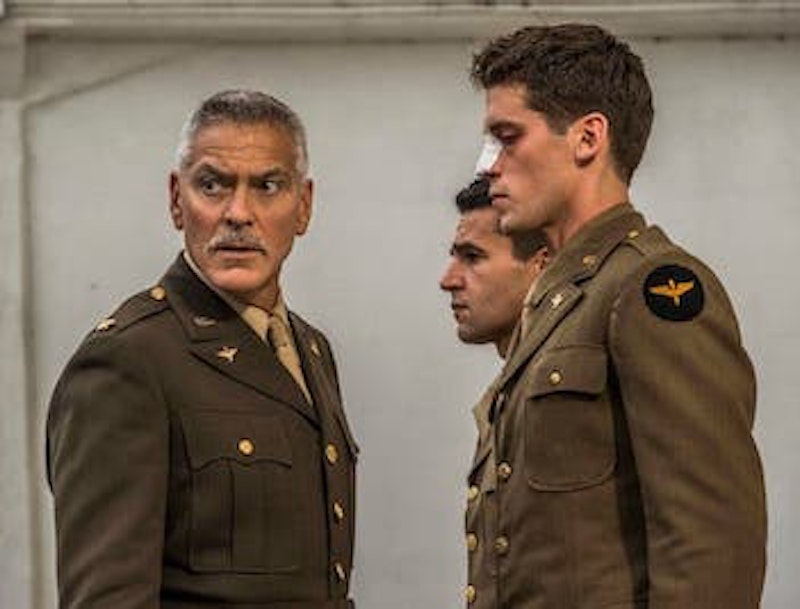 Mike Nichols taking on Joseph Heller's anti-war, anti-bureaucracy, anti-stupidity novel, Catch-22,as a film project was a bold move from a bold director. The novel's more of a collage, skipping from one absurd situation to the next, than a linear story easily adapted for the screen. Despite the challenge, Nichols succeeded in producing a memorable, if underappreciated at the time, piece of work. Unfortunately for him, M*A*S*H had been released a few months earlier, to great acclaim, and it grabbed the designation of the anti-war movie. Forty-nine years later, Hulu's taken another shot at depicting the scathing, picaresque war satire on film in a six-part miniseries.

Perhaps another disadvantage Nichols faced was that his source material was a book that had caused a literary sensation when it was released less than a decade earlier, in 1961. Heller's subversive, bitterly funny writing was still fresh in people's minds, pumping up their expectation level. Now, nearly 60 years later, showrunners David Michôd and Luke Davies (George Clooney is the executive producer) at least have more of a neutral cultural playing field. Few of their viewers will have read the novel, which is to their advantage.

Still, the better you know the book, the more you'll be frustrated with this adaptation. The genius of Heller's work, which he spent seven years rewriting, requires great skill to translate to a visual medium. Playing it safe by focusing on the creation of a well-crafted drama while de-emphasizing Heller's thrilling language, as this miniseries does, is like removing the bitter element of a cocktail in an attempt to make it more drinkable, only to find that the pleasing bitterness is what made people want to drink it in the first place.

Heller wrote a tour de force in which, with each chapter, he moves one of his large cast of characters a step closer to insanity or death. It's a long, slow descent into madness composed of surreal absurdity stacked on surreal absurdity, interspersed with terrifying hyperrealism. This is a far cry from a plot-heavy novel with pedestrian writing by someone like John Grisham that might appear to have been written mostly as an outline for a future lucrative movie—a movie that could be made by dozens of competent Hollywood directors.

If you haven't read the book, then you're freed up to view this Hulu series as standalone work. There might enough to it in it to keep you hanging in there for six episodes. The story's message is timeless, and there's a bonus for the modern progressive viewer in that the author's unseemly treatment of his female characters is scrubbed from the new version. That fits better with modern sensibilities, but it removes the story from its place in time. To read the novel now is to understand that there was once a time when a male author could get away with depicting most of the women in his novel as whores or sluts.

In a piece of inspired casting, Alan Arkin played Captain John Yossarian, the main character—a WWII bombardier stationed on an Italian island—in the Nichols film. The Hulu version stars Christopher Abbott, who turns in a solid dramatic performance but lacks Arkin's antic comic sensibility. Clooney mugs his way through his portrayal of the loathsome Lieutenant General Scheisskopf, and Kyle Chandler wasn't the best choice of actors to play the bumbling Colonel Cathcart, as his talents are more suited to solid, all-American figures.

The plot's repetitive in nature in that it deals with Colonel Cathcart constantly raising the number of combat missions Yossarian must fly before he can rotate out of the squad, driving him ever closer to the brink of despair. Doc Daneeka, a physician, can ostensibly get Yossarian off the hook by declaring him crazy, meaning he'd be grounded. All Yossarian has to do is ask to be grounded. The problem's that once Yossarian does that, he's proven he's not crazy, because only crazy people want to fly more missions, and then Doc Daneeka can't ground him. That's “Catch-22." When Yossarian hears about this, he lets out a grudgingly admiring whistle. “That's some catch, that Catch-22,” he says. “It's the best there is,” replies Doc Daneeka. That exchange captures the essence of the novel's humor.

The one thing the Hulu miniseries accomplishes more effectively than the novel does is in its strong description of the missions’ horrors. The spectacular, flak-filled aerial sequences are terrifying. They show viewers explicitly, in a way that Heller didn’t (or couldn’t with mere words), what's driving Yossarian's existential angst. He's a man of character, but not suicidal.

On the downside, Heller's large cast of colorful supporting characters is mostly flattened out in the new production, with the exception of Milo Minderbinder, the enterprising black market capitalist played by Daniel David Stewart. Consequently, most of the weight falls on Yossarian, who doesn't have enough to work with. This is surprising, given that the six-episode format would theoretically provide more space for character development.

What this black comedy's lacking, compared to the original film (and the novel), is laughs. There are two reasons for that: Nichols and screenwriter Buck Henry were both accomplished comics, while neither of the Hulu showrunners have such a background. Plus the cast of the miniseries doesn't hold a candle to the original film’s stellar lineup, which included Jon Voight, Martin Balsam, Orson Welles, Richard Benjamin, Bob Newhart, Martin Sheen, Anthony Perkins, and Buck Henry himself.

Hulu's Catch-22 seems only half-formed in that, while it builds drama, it fails to provide the equal measure of comedy that’s essential to completing the structure of the story. The original, dissident voice that made Heller's novel about war’s insanity such an exhilarating read just isn't all there. The characters need to be mad because to live with war and its bizarre rationalizations requires madness. As one of the novelist’s characters in this story might’ve put it, “To stay sane in war, you have to become insane.”