Lulu Wang’s The Farewell is a rarity: an artful and subtle crowd pleaser. B+ 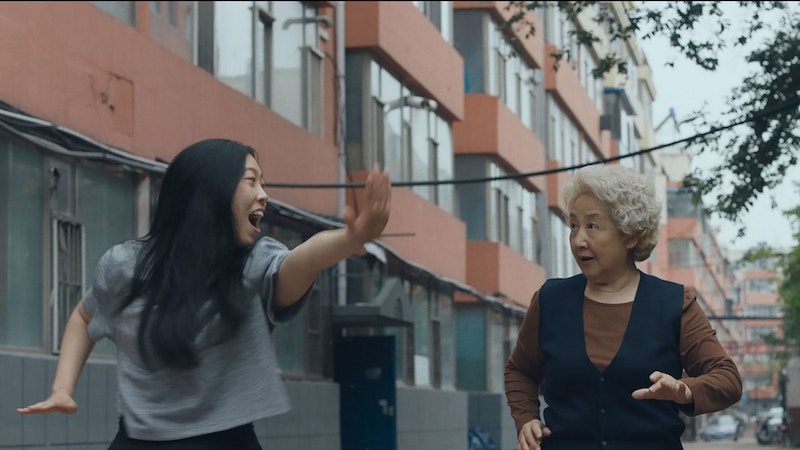 More hope for movies: Lulu Wang’s The Farewell is a low-key triumph of understatement. Wang’s film, mostly set in China with at least 70 percent of the dialogue in Mandarin, dismisses clichés and expectations of what it’s supposed to be. Awkwafina stars in a breakout performance as Billi, a Chinese-American writer recently rejected from grad school. She’s 30, discouraged, mildly depressed, but we see very little of her life in the States. Shortly after she reads her rejection letter, Billi finds out that her “nai nai” (grandmother in Mandarin) has terminal lung cancer. With three months to live, her extended family all agree to keep the prognosis private and let their nai nai live her last days out in ignorant bliss.

“It’s a good lie,” a well-meaning doctor tells an outraged Billi, who finds the whole production absurd and inhumane. Her uncle explains this is the difference between the East and the West—in China, one’s life is not one’s own, they are all part of a whole. He explains further that Billi and her family must carry the “burden of guilt” in withholding their nai nai’s illness from her.

The Farewell avoids the obvious and miraculously never veers into the maudlin or ridiculous. A movie about a dying grandmother is easy to make weepy and manipulative. Films about hospice and the terminally ill dare you to dislike them, shielding themselves from criticism. But The Farewell is refreshing, cleansing even, as Roger Ebert once said about the work of Yasujiro Ozu. The Japanese director is an easy and often lazy comparison for all non-action Asian films, but The Farewell shares Ozu’s fascination with family, the melancholy circle of life, and ambiguity (Wang cites Mike Leigh as a major influence, and it’s easy to see strands of Life is Sweet and Meantime here).

It also, like so many Ozu films, elides the major event: we never see nai nai die. Instead, once Billi has said goodbye and returned to New York, she stalks the streets at night and suddenly roars—simultaneously, a flock of birds take flight out of a tree just outside nai nai’s apartment. It’s a beautiful gesture, unfortunately undermined by an unnecessary home movie coda featuring Wang’s real nai nai, still alive six years after her terminal cancer diagnosis. The Farewell, otherwise so steady and understated, doesn’t need this cheap tag to leaven and clarify the grace of its poetic ending.

Naturally, Wang struggled for years to get the film made. Prospective financiers balked at the idea of a movie mostly in Mandarin with no white characters. “This Chinese producer was like, ‘You need a white guy in your movie’… They’re so influenced by Hollywood.” It’s what sells overseas: remember that Crazy Rich Asians underperformed in China, with moviegoers coming out skeptical, unimpressed, and even mildly insulted, “baffled by how what they see as a film full of Asian stereotypes could be celebrated as a coup for on-screen Asian representation.”

A couple of choice comments from Asian viewers: “So Chinese people in the eyes of Europeans and Americans are just about clans, extravagant snobbery, a blind sense of superiority, and stubbornly clinging to outdated rules and ideas?” Someone else was more succinct: “Well, guess it keeps the Americans watching it happy.” Representation for its own sake is an empty and insulting ideology, as if non-white people prioritize their race when it comes to politics and entertainment. I don’t blame Chinese viewers—in my eyes, Crazy Rich Asians was an obscene spectacle that mirrored Baz Luhrmann’s The Great Gatsby without a trace of irony or critique.

But that was supposed to be a blockbuster. The Farewell certainly isn’t, but it’s performing quite well here, with an impressive per-theater average and near-unanimous positive reviews. An acquaintance asked me how anyone could possibly actively dislike this film, and while it’s entirely possible, for once I agree. The Farewell not only plays to and succeeds with MOR art house audiences, it’s more than its representation. The matinee I saw was packed, with many American nai nais in attendance (one woman was not impressed—as I was walking out, I heard her tell her daughter and granddaughter that she “didn’t get it,” followed by a long pause, and finally the daughter asked, incredulously, “What’s not to get?”).

Going in, I thought The Farewell would be lachrymose boilerplate, but Wang has created an artful crowd-pleaser whose representation and cultural specificity is organic and inseparable from its aesthetic. It never gave me pause like Crazy Rich Asians; I never began questioning its agenda. Wang’s film succeeds because it leaves most of the “big” moments unseen, and what we’re left with is 100 minutes to spend with these characters. Despite the premise, it never feels predictable or corny. Subtlety like this is so rare, even from the feted A24.