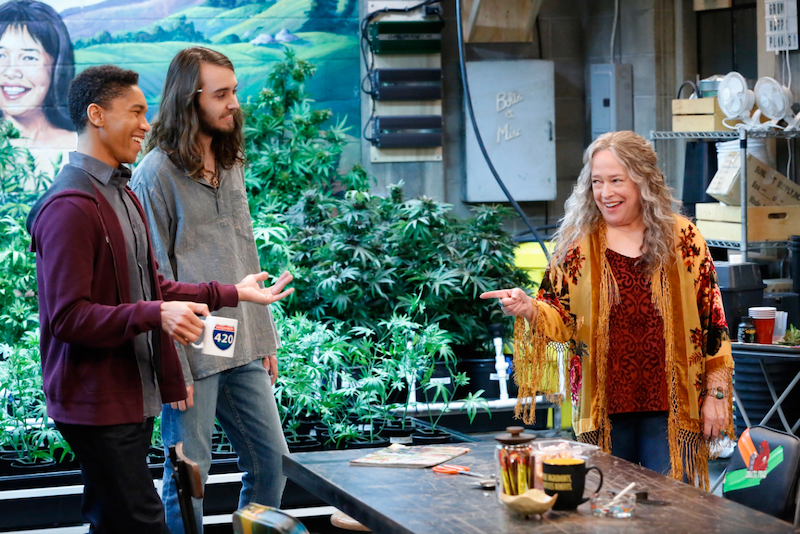 Disjointed has a laugh track that’s as unreal and imposing as a third thumb. The freak looks at you and you look back. The laugh track, to switch metaphors, is a barn-size steam organ of a laugh track. It has many stops and registers: not just laughs per se, but aw’s when a character dips into their heart, and a quizzical collective hm—a semi-hmmm—when somebody shares some life wisdom. So I recall, anyway. The laugh track was versatile and ever present. It nipped at the heels of the cast like Jeeves (third metaphor) shadowing a slacker. Every darn thing a laugh track could do, this one did, and its foot-pajamaed master shuffled in front of it.

Did the show want the laugh track to stand out? I don’t know. I can’t read the articles about Disjointed. Watching the show put a theory in my head, but somehow I feel tired when I think of matching that theory against facts. The theory: yes, Chuck Lorre meant for that laugh track to be a freak. Disjointed is Lorre’s “Hey, I get it” series, the one where Mr. Square Entertainment lets us in on his special reverse-angled take regarding reality’s underpinnings. The laugh track is a reminder that he knows we know, and so on. “This is a sitcom like Lichtenstein is a romance comic,” my theoretical Lorre says. (I see him as having a plum-shaded, decades-old coat of tan; there are moon-gray steel clumps of hair at either side of his throat, and the throat itself looks like a shriveled wallet pulled over some pipes. But he’s got a good head of bushy, moon-gray hair.)

Whatever Lorre’s intentions, Disjointed is not a top-drawer offering for the Netflix subscriber. Dull cast, starting with Kathy Bates. Some of them seem like they might be talented, some don’t. But talent has no chance here, so they wind up the same way. Look at the actors and it’s like they’re playing one of those party games advertised on TV. No one’s at rest, but they can’t do anything interesting. They’re not allowed. They’re bent beneath an atmosphere of compulsory stupidity. Despite the noise, the flatness never goes away.

Mainstream sitcoms don’t have to be like this. For what it’s worth, The Big Bang Theory and Two and a Half Men are perky. They’re also much more knowing about their subjects—geekdom and the jerk-guy life—than Disjointed is about pot. Yet the new show tries to make up some ground. Because it’s about pot, the producers can throw in format-busting curveballs, and they do. Mini-cartoons with accompanying soundtracks represent the PTSD experience of one of the characters, an Iraq veteran. Characters’ internal dramas are represented by fake Korean musical sequences and fake 1980s video sequences. Along with the fake laugh track, Disjointed has fake commercials. These are for dope, with standard U.S. ad clichés transferred to marijuana. The cartoons are good; they’re varied and imaginative. The ads could be funnier, and so could the fake music sequences. But together the mix shows that new things can be done. Basically, we have the dumbest, clunkiest, mall-lit network sitcom, and it’s set about by drop-in visitors from adjacent media dimensions. That might be good.

Dougie Baldwin, who plays Pete, the hippy-dippy weed grower, seems like he could be a real actor. The same for Tone Bell, who plays Carter, the Iraq vet. Another guess: sizing myself up, I glimpse the reason I can’t read about this series. It’s my laugh-track theory. I don’t have the heart to disprove it, because it’s my theory. But at the same time I’d hate to see it confirmed. I don’t want Chuck Lorre getting into levels.