The Joy of Gru

Seeing a Minions movie for the first time at the Fox Bruin in Los Angeles. 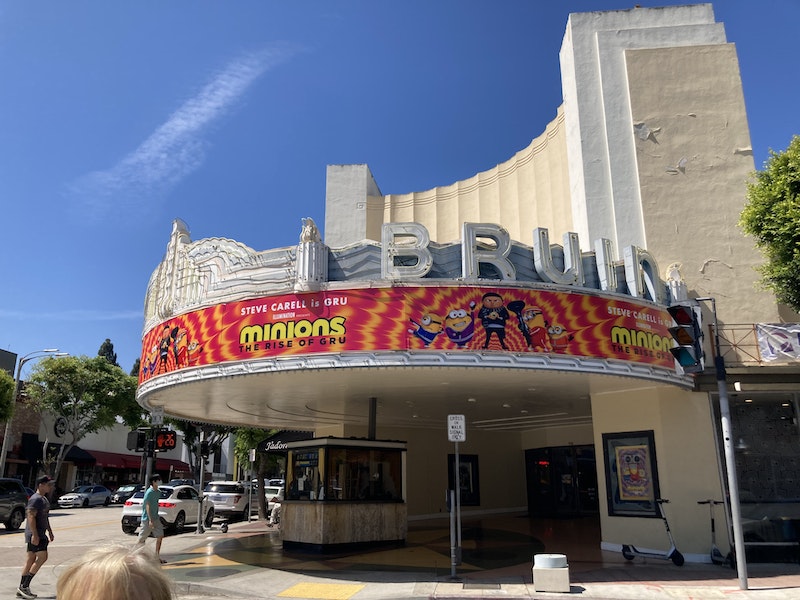 At 29, I’m too old to know much about the Minions. They’ve been inescapable for the past decade: yellow, goggles, denim overalls, and numerous—all speaking what sounds like 75 percent Spanish, five percent Chinese, and 20 percent gibberish. They first appeared in 2010’s Despicable Me, released just a few weeks before I finished 11th grade. I avoided it just like every Pixar move after Up in 2009; Toy Story 3 came out just a couple of weeks before Despicable Me, and even at the time I was put off by peers and people much older than me who sobbed during Buzz and Woody’s third go-round, and others still were “completely devastated by it.” Who needs that? I cry pretty easily in movies, but to go into a theater with the intention of bawling and wallowing in nostalgia makes me sick. You can’t play with old toys. It’s time to move on.

Despicable Me and its multiple sequels, including a Minions spin-off in 2015, have never aimed for the pretentious and exploitative work of post-Cars Pixar. These are movies for kids below the age of 10, and while I had a blast growing up and gobbling up Toy Story 2, Antz, A Bug’s Life, Mulan, and Pocahontas (the first movie I ever saw in a theater), at a certain point you realize this stuff isn’t hitting like it used to. For me, that moment was 2003’s Finding Nemo, when I was 10. After being briefly snookered by Pixar’s bogus “kids’ movies for adults” in the late-2000s, I completely dipped out. I don’t have children of my own and I’m not going to watch a cartoon that says it’s “for adults” unless it’s Fritz the Cat (I’m still holding out hope for a film or series based on Neil Swaab’s brilliant comic strip The Rehabilitating Mr. Wiggles—that’s a movie I’d like to make).

Nevertheless, last week I was in Los Angeles for my grandfather’s funeral, and my mom and I went down to Westwood Village to see how much it had changed since she had grown up and hung out there in the 1960s, 70s, and 80s. She said it wasn’t the same at all—just fast food chains, pharmacies, a Brandy Melville, and even more fast food. What did remain were the Fox and Bruin theaters, both now owned and operated by Regency but still right across the street from one another. Sitting in a cafe with a lot of time to kill, we looked up if there were any movies playing soon. Claire Denis’ Both Sides of the Blade had just started at the Laemmle, but that was a half hour away; we quickly decided to take a chance on Minions: The Rise of Gru, which had also just started but was a merciful 87 minutes. We walked over and went in spur of the moment, just like Sharon Tate in Once Upon a Time in Hollywood.

As soon as the prologue finished and the Minions were introduced, I realized how little I knew about them. These creatures are far from the annoying, quasi-demonic pests that I’d been led to believe they were: these are loyal and hardworking creatures, and in my book, they’re people just as much as the Quibbits family. This film is a prequel, made up of a series of formative adventures for future super-villain Gru (Steve Carell). It takes place in a mostly accurate 1976, with Minions throwing stink bombs into packed theaters showing Jaws, a subplot involving a Pet Rock, and Linda Ronstadt’s cover of “You’re No Good” as a passcode into a secret interview for potential super villains. Gru wants to join the Vicious 6, a gang with zero loyalty to their founder Wild Knuckles (Alan Arkin), who they toss off their hover-car as soon as he retrieves the precious Zodiac Stone. Cackling as he falls to his presumed death, they fly away and the opening credits, set to “Bang Bang (My Baby Shot Me Down),” begin.

After being so overwhelmed by Quentin Tarantino’s Once Upon a Time in Hollywood in 2019—one of the few movies that’s given me something like a mental orgasm—I’ve probably written about and referenced it a bit too much. But three years on, that movie and Tarantino’s influence are still everywhere: “Bang Bang (My Baby Shot Me Down)” is best known for its use in the opening credits of Kill Bill, Mikey Madsen was once again cooked to a crisp in the latest Scream in an obvious reference to her performance as Susan Atkins, and the period setting is another entry in a trend that was kicked off by Once Upon a Time in Hollywood, what Tarantino called his “memory movie.” Many of his peers followed suit, with Paul Thomas Anderson’s Licorice Pizza as the most obvious example. But more than anything else, Tarantino’s infinite passion for cinema and the moviegoing experience has clearly effected everyone, especially now that he’s moved into his “man of letters” phase (despite pledging to make one more movie, I don’t think he will).

It’s Tarantino’s anti-snob attitude that influenced me from the age of 10, and allows me to see Minions: The Rise of Gru for what it is and enjoy it. This is a great kids’ movie that won’t bore or “devastate” adults. It’s really fun and doesn’t wear you out at only 87 minutes; I’m not sure I remember the last time I was disappointed to see a movie end. The Minions are mischievous and a sure terror to whoever crosses them, but they’re forever loyal to the boy who took them in and hired them, and are impossible not to love. Unlike the grotesque Shrek series or the self-serious and overwrought new Disney movies, Rise of Gru is a visual extravaganza full of jokes for all ages, only once or twice leaning into easy “bathroom humor.”

This is a movie that feels so free and full of life, a celebration of cinematic possibility so sure of itself in its mild mayhem and kid friendly anarchy. They really are beautiful characters, and whatever Gru does in the previous movies as an adult is justified, because the Vicious 6 treated him like shit (his hectoring mom, voiced by Julie Andrews, didn’t help much either). But for all the bitterness and contempt that presumably follows in his life, and unfolded over screens across the global during the 2010s, the adolescent Gru is a good kid: ambitious, loyal, creative, and brave. Billions of people cheer him and the Minions on, even as they wreak mild havoc on the world. Minions are a beautiful thing.