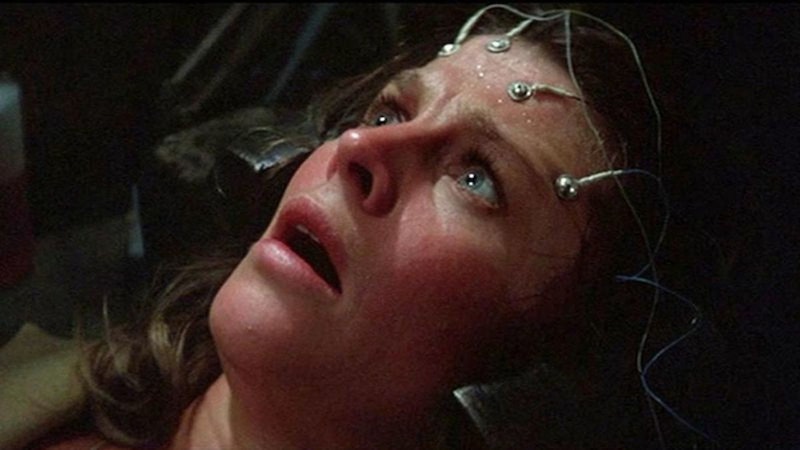 Writing a story about futuristic technology doesn’t sound much more difficult than writing any other kind of story. But there are actually many more ways to go astray. And writers are always finding new ones. Sometimes you even have to wait until the fictional technology’s really been invented to grasp where a story misfired.

Thus Demon Seed, part of the 1970s science-fiction collection the Criterion Channel streamed in January. Directed by Donald Cammell from a screenplay by Robert Jaffe and Roger O. Hirson, it’s a story set in or about the year it came out, 1977. Technophile scientist Alex Harris (Fritz Weaver) has kitted out his home with high-tech computer systems that control the temperature, the doors, the kitchen, and every aspect of the house—down to security cameras in each room and at the front door. Meanwhile, at work he’s developing a powerful new computer intelligence called Proteus, which he’s able to access at home because he’s built a special terminal there.

The AI goes bad, as movie AIs will, and traps Harris’s estranged wife Susan in the house. Most of the movie’s a contest of wills between woman and computer, as she tries to escape while Proteus (in the uncredited voice of Robert Vaughn) raves about inseminating her with a child who’ll represent a perfect fusion of humanity and machine. Luckily for Proteus, Alex has a biology lab in the basement.

Demon Seed does something curious: it starts off as a plausible piece of speculation, imagining technologies which have become commonplace, and then goes off in a bizarre and scientifically illiterate direction. Proteus wants a son; never mind that it’d much more difficult to synthesize a Y chromosome instead of working with Susan’s X chromosomes, the point is that the computer has a weirdly patriarchal obsession with generating a lineage.

The movie was based on a 1972 novel by Dean Koontz, which he rewrote in 1997 to take technological advances into account. I haven’t read either version, and don’t know how much he changed. Credit where it’s due: the imagining of the smart home, whether by Koontz or the screenwriters, is surprisingly accurate. It’s a genuinely solid piece of extrapolation of the near future.

Unfortunately, the story does an unconvincing job of imagining what an AI would be like. Proteus acts like a crazy human that lives in a box, or at least a creature that lives and reproduces like a human, not like software that can copy itself or upload itself to a network. Since the movie’s driven by Proteus’ attempt to attain its desire, this constitutes a fatal flaw. Of course the late-1970s were relatively unfamiliar with how computers work. But the movie knows enough about computers, and shows us enough about the way they operate, that Proteus acting like a human is a contradiction of what we see onscreen.

Demon Seed was only the second feature directed by Donald Cammell after he wrote and directed the shaggy, psychedelic, sexualized 1968 cult film Performance with Nicholas Roeg. This lack of output was apparently a function of his distaste for Hollywood and artistic compromise; surprising, given that Demon Seed tries to be a slick thriller. The IMDB claims Cammell envisioned it as a comedy until the studio forced him to reconfigure it as a horror-suspense story, and you can believe it.

At any rate, there are parallels between Demon Seed and Performance, a story about a criminal on the run going to ground in an eccentric rock star’s household. Both are set in specific interior spaces. Both involve a protagonist trapped in that space, toyed with by a kind of magus-figure who controls the environment (the computer in Demon Seed, Mick Jagger in Performance). But Performance had a world beyond the walls; Demon Seed hints at a corporate sub-plot involving the money behind the Proteus project, but that never quite comes into focus.

If it never grows into a political thriller, even as a smaller-scale suspense film it’s mediocre at best. The start’s slow and the characters are unengaging. That’s no fault of Christie, who does her best, but the writing and direction never become more than competent, and certainly never shows the distinctiveness of Performance. This is in essence an extremely low-tech version of Harlan Ellison’s short story “I Have No Mouth And I Must Scream,” in which a godlike computer torments a handful of humans. Compare those two stories and you see at once how conventional Demon Seed is, how poor the film’s imagination.

The tensions of Demon Seed are much more conventional than either the Ellison story or Performance. Susan divorcing Alex to fall prey to a computer bent on forcing her to bear its child feels like a botched metaphor for sexuality in the computer age. Specifically, there’s a distasteful sense of the computer, the new patriarch, breaking the will of a woman to force her to bear a child. That’s amplified by an early nude scene in which Proteus spies on Susan as she showers; the audience sees what Proteus sees through the security cameras, putting us in Proteus’ place. We become a voyeur with Proteus, in a scene that echoes Psycho.

As the film goes on, Proteus torments Christie until she yields to him, like a 1970s version of a Victorian melodrama. You could read it as the film punishing Susan for divorcing her husband. On the other hand, the most distinctive moment of the film comes when Proteus forces her to conceive, an odd light show like a cut-rate version of the climax of 2001; as though the movie allows her some kind of fulfillment or transcendence only through conception.

Either way, the movie doesn’t have the self-awareness to play knowingly with these themes. From the point early on when Susan refers to Proteus as “dehumanizing,” it wants to be merely another cautionary tale of technology gone mad. It’s hard now to watch the movie as a 1970s audience might’ve received it. Would the smart home with all its gadgetry have seemed disquieting? Would it have seemed unnatural, an incursion by technology on the way things were meant to be? I suspect it would’ve. This is the least inspiring of cinematic Frankensteins, a true artifact of its time, impossible to retell today.