From Three Billboards to Baby Driver. 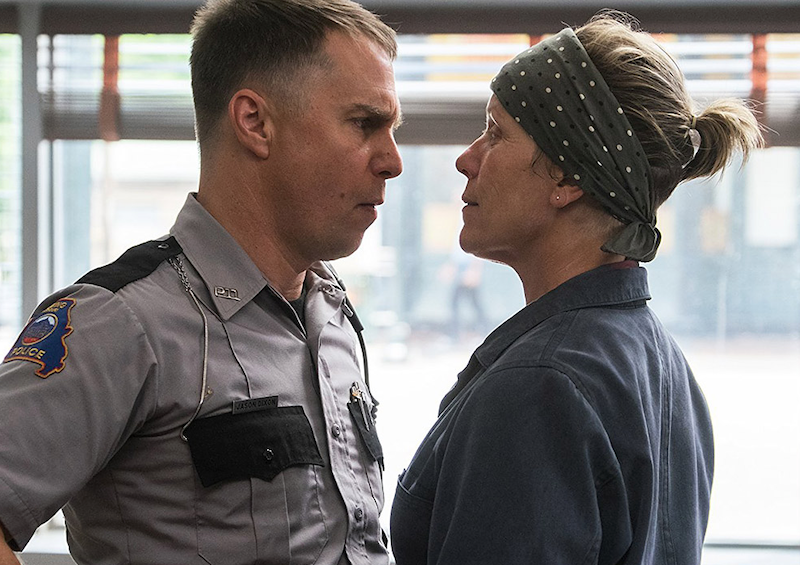 2017 was the richest movie year in memory, often delivering a respite from the general unpleasantness in the news. The fall months, in particular, delivered with one satisfying film entertainment after another. I had a harder time narrowing down my Top Ten this year than perhaps any other. My picks for the best films of 2017:

—Three Billboards Outside Ebbing Missouri. Martin McDonagh’s film is an intense character study about rape, racism, small town hopelessness, and much more, cut with empathy and a surprising amount of humor. So many films this year failed to handle radical tonal shifts, but Billboards managed it, helped by first-rate turns from Frances McDormand, Woody Harrelson, and Sam Rockwell.

—Get Out. Yes, Jordan Peele’s directorial debut sports the year’s most clever script and a delightful slow burn of a plot, one in which almost every little bit of dialogue pays off down the line. But beyond that, it’s an absolutely perfect film for its cultural moment, built around a critique of the racism of earnest, northern white liberals.

—The Florida Project. Sean Baker’s astounding film, set in a rundown residential motel on the outskirts of Orlando, has the best sense of place of any film this year. Starring a cast of mostly novice actors, many of them children, it’s a slice-of-life tale that looks nothing like anything else on screen this year. Standing over it all is Willem Dafoe as the complex’s superintendent, in a career-best performance.

—Lady Bird. Greta Gerwig’s first film as director captures her voice perfectly, telling a semi-autobiographical story of a high school girl’s experience in Sacramento in the early 2000s. She’s perfectly embodied by Saoirse Ronan, and her relationship with her mother (Laurie Metcalf) is one of the best of its kind in recent history. It’s funny, poignant, and true.

—Call Me By Your Name. It’s hard for a movie set in an Italian resort town to not be at least a little bit good, but director Luca Guadagnino’s adaptation of André Aciman’s novel may be the best. It’s a gay love story between Timothee Calumet’s young teenager and Armie Hammer’s grad student, but it’s much more: A beautiful tale of flirtations, walks around town, and long, luxurious meals. It also boasts, near the end with Calumet and Michael Stuhlbarg, the best movie scene of the year.

—Dawson City Frozen Time. The story behind Bill Morrison’s documentary is amazing, and the film itself even more so. In 1978, more than 500 silent film reels were found in a frozen pool in Canada’s Yukon Territory. The reals represented a broad cross section of lost film history, everything from early features to the 1919 World Series. Morrison cut them all together, coupled with one of the year’s best scores, by Alex Somers. The result is a haunting, gorgeous spectacle.

—Coco. The latest from Pixar is far and away the year’s best animated film, and haunted that studio’s recent losing streak. Excellent songs, a compelling story, and satisfying emotional payoffs combine for one of Pixar’s best efforts.

—The Post. It’s like a prestige movie grand slam: Steven Spielberg, Tom Hanks, Meryl Streep, and a real-life story of huge importance to baby boomers. But Spielberg’s film lives up to its pedigree, telling a compelling story that’s different enough to not be totally overshadowed by that other movie about The Washington Post vs. Nixon.

—The Shape of Water. A love story set in 1960s Baltimore about the love affair between a mute female janitor and a merman/sea creature? It didn’t sound that exciting to me, either. But Guillermo Del Toro’s film somehow turns that premise into something great, with a superb visual style and a superlative supporting cast, with Stuhlbarg again, along with Michael Shannon and Richard Jenkins.

—Baby Driver. Edgar Wright’s film is the year’s most satisfying action movie, featuring its best soundtrack. And while roughly three dozen movies this year were shot in Atlanta, Baby Driver was the one film that actually used it well.