I’ve no high hopes for the upcoming Star Wars films. 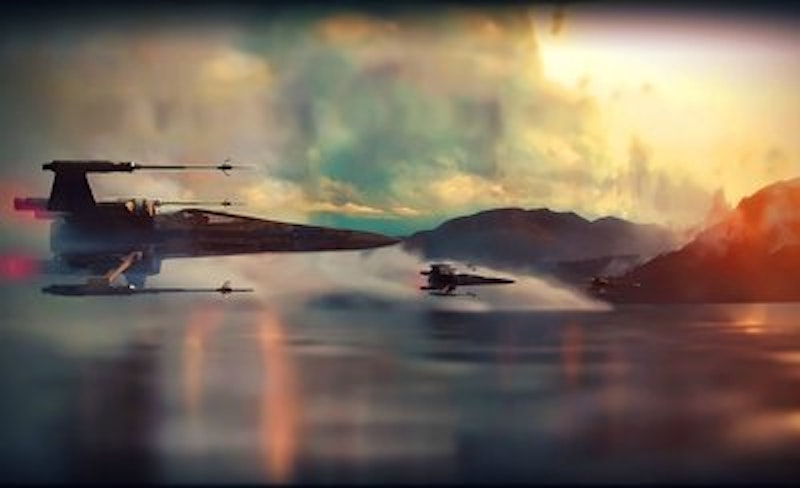 One afternoon a few weeks ago I checked my Twitter feed and found it had exploded with emotion. Uncharacteristically, the emotions involved were positive. People were writing about hope and even exhilaration. Grown men were weeping for joy, in electronic form, at least. A trailer for the new Star Wars movie was out, and it had hit a nerve.

Well, in everyone except me.

I’ve no high hopes for the upcoming Star Wars films. Still, after reading any number of semi-coherent tweets, after seeing cartoon after cartoon depicting jaded adults turned into children playing with action figures, curiosity got to me. I clicked through to watch the trailer and was unimpressed.

The special effects were excellent, but that was a given. The problem was there was nothing new. By the halfway point, I suspected I was watching some kind of Star Wars greatest-hits reel: here’s a desert planet (again), here’s Darth Vader’s mask (again), here’s R2D2 (again), here are X-Wing fighters (again), here’s a lightsaber fight and Imperial Stormtroopers and TIE fighters and a Star Destroyer and a cute robot (again and again and again and again and again). The climactic emotional moment of the trailer was a shot of Harrison Ford as an aged Hans Solo who apparently has been wearing the same color scheme for the last 30 years. “We’re home,” he tells his sidekick with a nervous smile, and is answered with a familiar sound effect.

“We’re home.” Is there any phrase less appropriate for a Star Wars trailer than that? The first two movies in particular hit so big because they were showing the audience new things—in a familiar idiom, yes, but within that idiom presenting an inventive vision. Apparently J.J. Abrams, the hired hand responsible for the new movie, doesn’t want to risk alienating his audience. The message of the trailer is: remember all that stuff you like? Here it is again. Just like it used to be. I promise. No wonder those cartoons showed adults reverting to children. Abrams seems to want nothing more than to make it 1976 all over again.

In fairness, he had two good reasons for taking this approach with the recent trailer. To begin with, there was the reaction to the first trailer released for the film, in late 2014. Fans loved the fact that there was a shot of the Millennium Falcon, but squabbled over whether it made sense for a lightsaber to have a crossguard. More disturbingly, some also expressed a negative reaction to seeing a black man in Stormtrooper armor. One way or another, the point was that new things were more than the fans could easily accept. And overall the first trailer focused largely on new characters; it’s unsurprising that Abrams retreated to safer ground for the second.

The other reason for harping on the upcoming movie’s resemblance to the first three is, of course, the prequel trilogy. The response to Abrams’ second trailer is perhaps as enthusiastic a response a Star Wars trailer has had since the first teaser for The Phantom Menace. People were excited back then, too; I’ll cop to going to a grade-z movie just for the sake of seeing the trailer on a big screen (Wing Commander). And then the first movie came out, and it wasn’t good, and the next one was worse, and the third almost incoherent. Abrams has to try to reassure his audience that the next movie won’t be anything like those ones.

Hence a trailer filled with reheated designs from the 1970s. Hence the recent Comic-Con behind-the-scenes reel promising “Real sets. Practical effects.” Sure, because that’s what the problem with the prequels were: not enough models.

It’s not just that Abrams’ Star Trek films were trainwrecks (particularly the second). It’s the reasons why they were trainwrecks. It’s tempting to say that the problem with the Trek movies was that they were too much like Star Wars. Except it wasn’t. The Trek films had plot and logic holes of a kind that weren’t characteristic of the original Star Wars movies, which at least tended to keep things simple. The problems with Abrams’ Trek were conceptual: an incoherent setting and lazy plotting, meaning that character moments felt random and unearned, while action scenes were ultimately unsurprising. When you know how a fight or chase is going to end before it starts, there’s no tension.

Thematically, too, the Trek movies were vacant. Abrams has said he found the original TV series too philosophical. Yet for some reason people think his Star Wars movies will be good. Even though when Lucas tried to rationalize away the pseudo-mystical philosophizing of the Force he was roundly criticized for it. Which gets at the real issue, I suppose. Abrams isn’t Lucas. Lucas disappointed people. Lucas dared to try and do something different. Not much different, maybe, but a little different. That isn’t likely to happen with Abrams. He may not have the intellectual equipment to be able to understand a network TV show from the 1960s, but at least he won’t make The Phantom Menace.

Which may be too bad. Again, I don’t think the prequel movies are good movies, but I do think they’re at least interesting movies. They’re movies in which you see a filmmaker expanding the technical resources of film special effects at the same time as his narrative sense becomes increasingly incoherent. They’re movies in which the director realizes he can do anything, and unfortunately tries to. Visually they break new ground, but then are slowed by Lucas’ fascination with that new ground. And they’re tripped up by words, by the need to express plot points through dialogue. Lucas has said he imagines his films as silent movies, and I think the prequels might actually have worked if he’d gone that route. Eliminate all the dialogue except for a few plot points on title cards. Have the soundtrack be just John Williams’ score and some sound effects. It wouldn’t make them worse movies.

Maybe Abrams will produce as spectacular a misfire as Lucas did. I doubt it. I think he’ll produce a manipulative, semi-competent entertainment, good enough to make money. I think Disney’s got too much invested in Star Wars—they paid $4 billion for Lucasfilm, after all—to allow a really bad movie to go out the door. And I think we’ll see a parade of decent and technically sound Star Wars films over the next few years. But I don’t think they’ll generate the kind of reaction that the first three films did (arguably the first four, given how much of a sensation “new Star Wars” was in 1999).

On the recent Comic-Con behind-the-scene reel, there’s a moment with Peter Mayhew wearing the Chewbacca suit with the mask off. “Get back to the old days,” he says. “The old ways of doing things.” There’s something very 21st-century about that way of thinking: the man who created Star Wars is gone, and now the franchise can go back to the way it used to be. You know, Star Wars the way it was before George Lucas. It’s beginning to look like that’s what the new movies will be about: nostalgia. Why not? It’s the sort of emotion that can pull in hundreds of millions of dollars.