My Vagina Was Bored at the Male Stripper Movie

Pretty sure I heard her yawn during Magic Mike XXL. 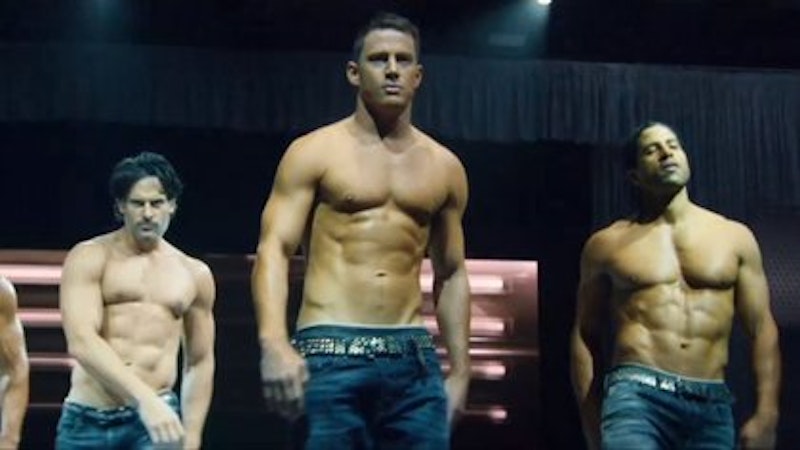 Back in 2012, my vagina and brain worked together to write a joint movie review of Magic Mike. While my brain gave the movie two out of five male stripper-tip dollar bills, my vagina enthusiastically shelled out five out of five. While like most women I wouldn’t have thrown Channing Tatum out of bed for eating crackers, it was Matthew McConaughey who distracted my nether regions from the terrible writing and acting back then.

But McConaughey got all serious since ‘12 with Dallas Buyers Club and fancy Lincoln self-monologue car commercials and True Detective and Interstellar, so no way in hell was he going to lower himself back into ass-less chaps to show up for the stripper sequel. They actually tell Tatum he’s dead in the opening scene, which turns out to be a (not funny) joke. It doesn’t get better from there.

You go see Magic Mike XXL because there’s nothing much else playing, because it’s fun, and because you’re happy you remembered to tell the girl to layer the butter in your popcorn and you threw in the Sno-caps and they’re so good melted in there. You go because hooray, your kids are old enough to go to a movie in the next theater without you. You go because the 24 minutes or so of the film that are actual male stripper scenes are quite fun (Tatum in a Flashdance welder mask doing Pony by Ginuwine, check) even if you have to suffer through the other 90 minutes in-between them. In the meantime, you vow to see the Trainwreck movie with Amy Schumer next time because Jesus, could she be any more on fire?

I’m not sure why this movie even had a script. The plot: the guys from the first film minus McOscarwinner get back together to go to the national stripper convention and perform. That is all the movie is about. (What the hell did Andie McDowell agree to do this movie for? And Jada Pinkett Smith is so boring, too.) There isn’t even the love interest for Tatum this time, only a girl who reports she’s in a girl phase, eats red velvet cake, and he says she should be more interested in the pole than a photography career. They don’t even make out. So zero romantic make-out hot sexy love interest scenes. It’s like they forgot to include sex in the sexy movie.

Not so easily distracted by gyrating hip thrust glittery man-thong musicals, I guess, my vagina is more discriminating now, because she was genuinely bored during the film. A YouTube compilation of just the stripper scenes may have held her attention. But two hours? There just isn’t enough magic this time.