Children of the Grave

Amy documents another feeding frenzy of a troubled celebrity. 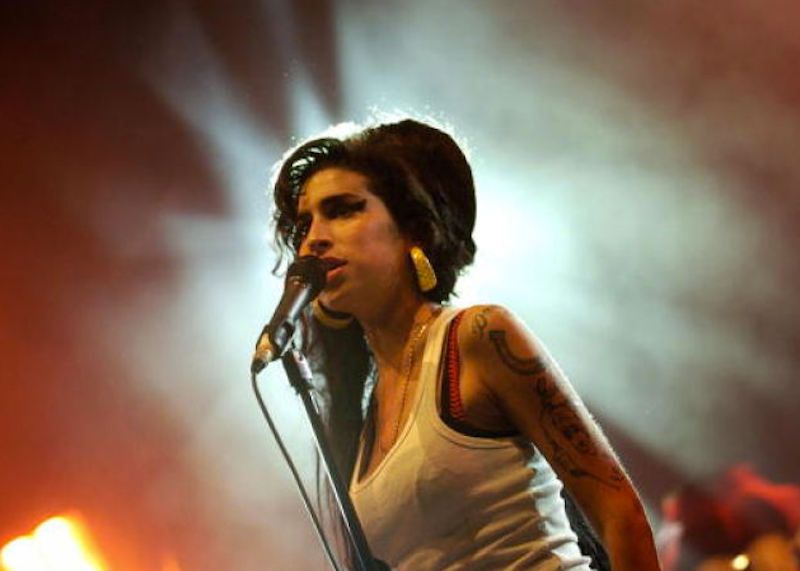 I’m square in the target demographic for Asif Kapadia’s new documentary Amy about the rise and fall of blue-eyed soul singer Amy Winehouse. I knew nothing about Winehouse besides her song “Rehab” and the circumstances of her death in June 2011. She’d long since become a familiar caricature in the media—skin and bones blinded by hives of paparazzi flashing cameras, beaten and burned by the same reporters and rubberneckers who’d lament her predictable death as a tragic loss to music. Not as much of a whip-crack reversal as Michael Jackson, but after four years of kicking someone on the ground—hounding her, following her around, and making jokes at her expense (we see Winehouse perform on The Tonight Show with Jay Leno, only to have Leno taking a cheap shot at her drug problems 15 minutes later in a monologue)—the grief was gross. I don’t think it was crocodile tears, I think we (the public and the media) feel disgusted for getting what we wanted and knew would happen all along, and that same mix of shame and regret after bad sex or sour milk sinks in. The most disturbing moment in Amy comes at the very end, when a camera zooms in on the singer in a body bag, and some naff fan shouting, “Rest in peace, Amy! We Love You!” without any grief in her voice—her tone of voice sounds like she’s asking for an autograph at Starbucks. Watching Amy Winehouse’s body being carried out in a red bag is just the final installment in the show.

The saddest thing about Amy is the familiarity of Winehouse’s rise to fame and fall from grace. It’s not even worth noting—shy, sensitive artist from a broken home keeps herself alive through the magic of music, and as she gets ground through the machine, weed turns to binge drinking which turns to smoking crack and heroin, and her biggest hit “Rehab” had it written in the cards. I only knew Winehouse through her media effigy, and the abundance of intimate home movie footage in Amy absolutely obliterates that image from the periphery. The similarities between Winehouse and Kurt Cobain and their intimate, image-obliterating documentaries released this year are abundant. I already knew what Montage of Heck proved, even though the later-period home movies were revelatory because they were unseen to any huge fan. I never cared about Amy Winehouse or her music, and for example had no idea that she was a jazz singer, not a pop singer, and that, like Cobain, would’ve preferred playing to packed clubs instead of stadiums and awards shows. Like Montage of Heck, this movie is composed entirely of home movies and archival footage, supplemented by audio-only interviews with Winehouse’s closest family, friends, and associates. It’s a story we’ve all devoured before.

If Lindsay Lohan were to OD tomorrow, the same thing would happen. But a suicide? Different story. Kurt Cobain once said, “I feel like people want me to die because it would be the perfect rock & roll story.” Shooting himself in the head with a shotgun and purposefully OD’ing was one big middle finger to that parasitic cultural impulse that kills mentally ill, drug-addicted, and unwell celebrities like Amy Winehouse, so that we can have them Forever 27, preserved in amber to be groped and possessed. Fuck that. Live Fast, Live Long.