Mr. Robot Is the Best Christian Slater Show on USA 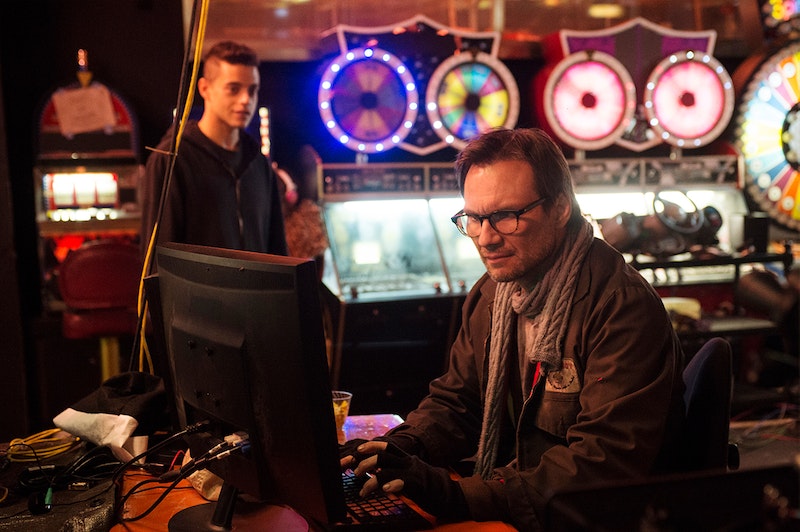 Even before Mr. Robot premiered in late June, USA had renewed the show for a second season. The pilot had won awards at both SXSW and the Tribeca Film Festival, and an early online release had racked up some 2.7 million views in less than a month. Across social media, fans praised both Remi Malek’s performance (rightly so) and Sam Esmail’s hacker realism—for example, typical enthusiasm from a recent Reddit post: “Been writing software since the early 90's. This is the least bullshit fiction I've seen about hacking in ages. This show is fucking amazing!” This from the network famously parodied by The Onion for its “interchangeable sun-soaked shows about cops, lawyers, doctors, doctor-cops, spy-lawyers, and cop psychics.” Yes, Mr. Robot is the most interesting show USA has done in years. No, it’s not amazing.

If anything Mr. Robot is just a stew of its own obvious influences. It’s Fight Club for the Snowden era, with Christian Slater as Tyler Durden. Malek plays Elliot, a security tech and vigilante hacker—also a drug-addled loner—who’s initiated into a hacker collective known as “fsociety.” They’re trying to bring down E Corp (“Evil Corp”), a financial conglomerate that holds 70 percent of the country’s debt. Mr. Robot explains all this to Elliot in a sort of red pill/blue pill speech (to be fair, Esmail has said the scene was a Matrix homage). Elliot reluctantly agrees to help, first by framing CTO Terry Colby for fsociety’s DDoS attack that starts the show, and later by infiltrating E Corps ultra-secure data facility, Steel Mountain. With Colby in jail, E Corp’s Senior VP of Tech Tyrell Wellick looks to take over. Wellick is a total Patrick Bateman knock-off. He pays homeless men so he can beat them up. I’m just waiting for him to bust out the videotapes line.

Meanwhile, Elliot gets involved with his neighbor/drug dealer Shayla, who’s in trouble with her supplier Fernando, an abusive psycho who Elliot gives up to the cops. There’s also Elliot’s best friend (and co-worker) Angela, who by episode five has ditched her sleazy boyfriend Ollie, not just because he fucks other women, but because he inadvertently got all their financial info hacked by the mysterious Dark Army.

All of this is fine but there’re a lot of contrivances and hokey dialogue. The constant voiceover all but bludgeons you. Pop psychology abounds. Mr. Robot says things like (referring to Trenton, a Muslim fsociety hacker), “She may look innocent but I’d be careful… she’s got some Allah Akhbar in her.” That’s almost a good line. The end of episode four is given over to an extended hallucination as Elliot withdrawals from morphine but it doesn’t really tell us anything, it’s too early in the show for all that. When Elliot sells out Fernando, he includes an un-incriminating photo obviously taken in Shayla’s apartment. What should have been a one- or two-episode story arc now figures to be season-long.

Or take the end of episode five: Angela goes back to her dad’s house after breaking up with Ollie and finds a bunch of past-due bills from E Corp. Her dad owes something like $25,000, so Angela goes for a run and ends up at a literal fork in the road. That’s the last shot. Talk about laying it on. Someone should remind Esmail that subtlety goes a long way.