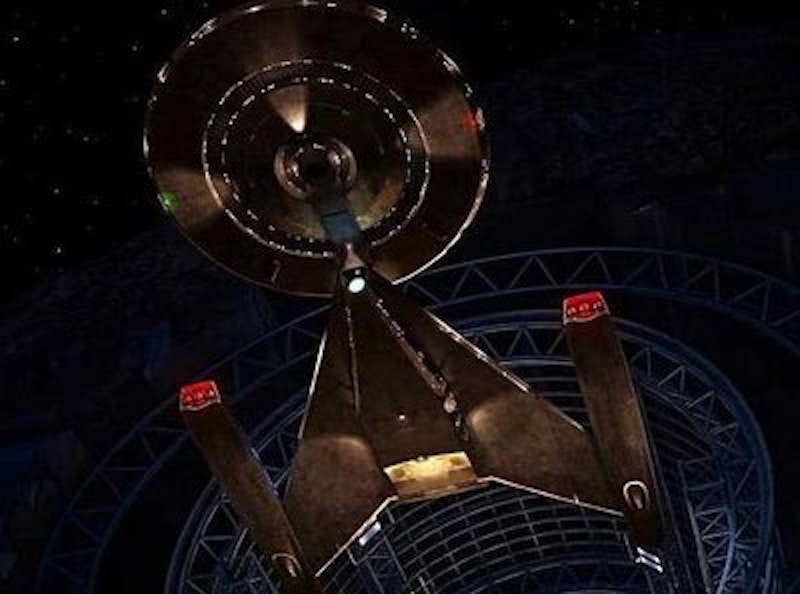 Hardcore fans, by contrast, worry about whether the show’s creators will even keep track of which universe the show takes place in. The three most recent films take place in the so-called “Kelvin timeline,” created by changes wrought when Spock traveled back in time. Disturbingly vague comments from the new show’s producers suggest this series, by contrast, takes place in the original timeline. They claim they have assistants keeping careful track of this stuff. Great, if true.

But I used to believe comic book companies when they made claims like that. Then, at some point, there comes the pressure from some dim-witted corporate higher-up (who can’t even spell “continuity”) to make the new iteration of the franchise look like “that other thing that sold well recently” regardless of what nerd logic and internal coherence dictates, and then the whole fabric of the universe is threatened. (At Marvel and DC Comics, they’ve basically given up on continuity, so they just come up with new reasons every year or so to have spacetime in permanent flux.)

There are complicated behind-the-scenes contractual pressures on Star Trek, too, that dictate whether new costumes can look identical to old toys and other maze-like restrictions too depressing to get into here. My prediction is that the show will mostly pull it off, sticking to the classic timeline until it doesn’t, with an army of self-sacrificing fans then leaping into the temporal breach to rationalize whatever error occurs. Maybe the eventual glaring error will be a too-early launch date for the starship Enterprise. Maybe it will be a reference to Khan when he shouldn’t yet be awakened from cryogenic suspension. The fans will be watching and waiting. On some level, they’ll enjoy their chance to be outraged.

But having been through this sort of thing repeatedly for a few decades now, as reboots and time travel plots both become more common, I’ve gradually surrendered to the idea that franchises should take the path of least resistance: do whatever is easiest for the new writers, editors, and showrunners to keep track of. We know by now how fallible they are. Why ask them to do the impossible? They have to go home at the end of the day and stop worrying about the details just like normal workers, after all.

In the 21st century’s unprecedented flurry of cultural information, few people these days can even be bothered to remember real-world history (or current events), so the days of expecting everyone to show fealty to decades of fictional sci-fi history may be dead.

I notice Slate’s Aisha Harris wrote a piece called “Springtime for the Confederacy” in which she took an admirably forgiving attitude toward the loosey-goosey, fun-and-games approach taken by a Dolly Parton music-hall attraction down South to recounting the history of the Civil War. That attitude will keep Harris’ blood pressure from going up, but I couldn’t help being reminded that Harris, not coincidentally, is the person who casually blurted out the big revelation from the movie Star Trek Into Darkness to me just before I saw it (namely, the villain’s identity). Her editors had sent her to write an advance review as sort of a joke precisely because she’s not a Trekkie and couldn’t care less which old Trek villain is which.

Four years later, I tell myself to forgive her because the movie wasn’t that great anyway—and it occurred in the Kelvin timeline, so what difference does it make?

In fact, if it were all up to me (Star Trek continuity, I mean, not the legacy of the Civil War, which I guess has been in the news lately), I think I might well do some J.J. Abrams-like, universe-altering Trek housecleaning and revamping. As DC Comics’ endless, futile reboots have taught me, you can never really turn an omelet back into a beloved egg once the reboots have set in, but you might just be able to do one more revision that makes things simple and headache-free for future writers and expunges most of the lingering garbage.

Imagine, then, one more big Trek time travel story—something along the lines of Temporal Engineers being revealed who can remake the universe at will. You still don’t want to just revise things willy-nilly, though. Among other things, that sets a bad precedent, since other writers/producers will come after you and perhaps be seized by some similar revolutionary mania. But in the case of Trek, I think in one fell swoop you could plausibly erase just the parts where the plots revolved around time travel itself and be left with a pretty tidy universe.

Keep in mind you want this all to be quick and surgical, not only for the sake of harried producers, archivists, and fans but for the current characters themselves (of, say, Discovery), since they’re the poor bastards who are going to have alert the world to this final, perfect round of changes via a few minimally-awkward lines of dialogue, amidst some sort of big time-crisis battle or whatever the episode plot is.

Imagine: no more explosion of Romulus’ sun or Spock disappearing down a wormhole to create the Abrams films’ continuity (in which, outrageously, neither timeline contains both an intact Romulus and an intact Vulcan, as I’ve lamented before). No Star Trek: Enterprise series from the 00s with its “temporal cold war.” Maybe erase Kirk’s death in the time-altering Nexus from Star Trek 7. And for good measure, though this has nothing to do with time travel, I’d get rid of the abysmal Star Trek 5 (which even Roddenberry said he’d like to regard as non-canonical) by saying it was just a tall tale told around the campfire seen in the opening and closing sequences of the film (this was the wonderful false impression that a childhood friend of mine got watching the movie, and it’s not a bad coping mechanism for suppressing memories of that film).

Even J.J. Abrams would probably approve of this sort of bold rescue/revision maneuver. After all, he’s not only the man who gave us a rebooted big-screen Trek in recent years, he’s the guy whose sci-fi TV series Fringe at one point showed us a glimpse of an alternate timeline in which Eric Stoltz was the star of Back to the Future (as was originally planned in the real world, I swear). Abrams is pragmatic enough to know that things could always be different—that things can always change, if they’re kept a bit loose. He thinks more like a very busy producer than like an obsessive writer.

But while I await the day this Trek-rescuing dream becomes real, I’ll try to be patient and watch to see precisely what Star Trek: Discovery says about the current status of those waxing and waning lumps on the Klingons’ foreheads.

—Todd Seavey is the author of Libertarianism for Beginners. He writes for SpliceToday.com and can be found on Twitter at @ToddSeavey.