No One in the Jungle

Predator and the war that wasn't there. 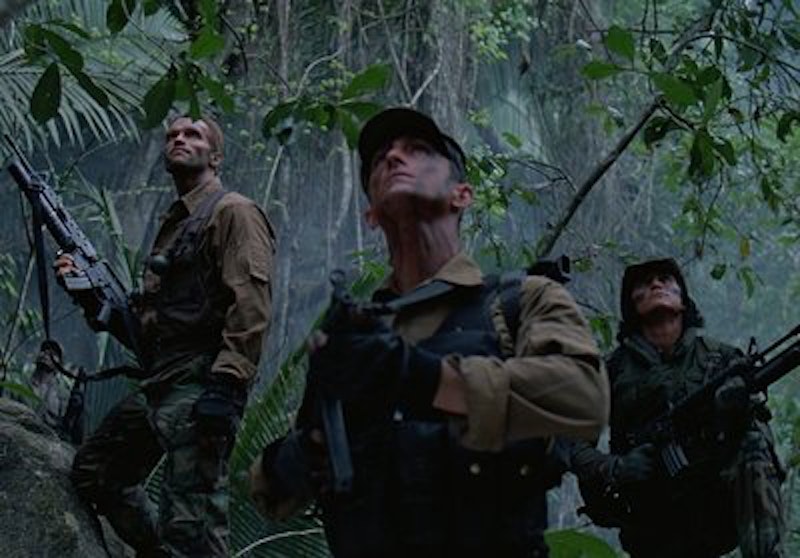 This is part of a series on latter-day U.S. colonial wars. The previous installment, on MASH, is here.

The 1987 film Predator is not a Vietnam movie. But it’s often thought of or discussed as a Vietnam metaphor. John Thomas, one of the writers, said that if the film had been made "a few years earlier, it would have been set in Vietnam." Scholar Michael A. Anderegg includes a long section on Predator in his book Inventing Vietnam: The War in Film and Television.

Yet, Predator takes place not in Vietnam, but in a nameless Central American country. The United States was in fact involved in covert Cold War military actions in Central America in the Reagan administration. But those quasi-wars are rarely represented on film or in popular culture. Predator doesn't really portray these wars either—in fact, it goes out of its way not to. The film is about its own refusal to talk about the war it's talking about. Like the camouflaged Predator, the film disappears into its own jungle setting. Violence pours out of the landscape itself. No one pulls the trigger.

Predator, Anderegg argues, took the "failure of cinematic signification as its primary plot." The film—like many films about Vietnam—deliberately dwells on its own inability to represent war. The plot of the film is a kind of Hollywood plaster façade. Dutch (Arnold Schwarzenegger), the leader of a mercenary rescue team of former Marines, is hired to extract a Cabinet officer and other diplomats who have been captured by rebels in Central America. After the team tracks the rebels down and kills them, though, they discover that the diplomats weren't diplomats at all, but CIA operatives. The mission was not to rescue anyone, but to disrupt Russian incursions.

Anderegg reads this as a meta-commentary on the war film. Dutch is fooled by a dramatic script, just as moviegoers are. But you could also see the deception as a nod to America's own confusion and denial. "We don't do this kind of work," Dutch tells government operative Dillon (Carl Weathers) after Dutch's team has murdered dozens of people. Dillon tells Dutch it's time to wake up—a pointed comment which could be directed at the movie viewer as easily as at Dutch.

The truth is, Americans do exactly this kind of work—they just take pains not to know they're doing it. Iran/Contra in the mid-1980s consumed US media, but the scandal, which involved illegal arms shipments to Nicaraguan right-wing groups, never translated into much interest in America's role in Latin American wars. This is why Predator keeps having Dutch's crew reference Vietnam, and why critics have often talked about Predator as a Vietnam metaphor. Vietnam was a war that America visualized; it's a war that America knew it was fighting. In Central America, the United States never saw itself.

And so, Predator gives the viewer the perspective of an invisible, destructive force. The predator of the film is a giant alien hunter, with powerful camouflage technology that allows it to blend into the jungle. In the tradition of slasher films, the initial shots of the Predator are instead shots from the Predator's perspective. We see through the Predator's eyes, invisible watchers listening to the human's distorted voices, as their bodies change into blobs of heat to reflect the Predator's particular vision range.

For Anderegg, the film-as-murderer is a winking acknowledgement that what’s represented is not war but a representation of war. But you can also see the remote, invisible death dealt by film as a metaphor of the remote, invisible death dealt by the United States on a Central America that the United States doesn’t even admit to itself it’s terrorizing. Dutch proclaims his innocence, as he invades and murders. The second half of the film puts Dutch and company in the position of those invaded. Suddenly, they are the ones hunted and slaughtered by an obscure foreign power with advanced, destructive technology that denies its own presence on the ground.

When Dutch finally defeats the Predator, he stands over it, and demands, "What the hell are you?" The Predator responds in a flat, apparently computer-simulated voice, "What the hell are you?" The answer to both questions might be, "the United States" or, just as easily, "the absence of the United States." The Predator is an American military presence that can't acknowledge its own existence even when looking directly at itself. Predator looks at the Predator and sees Vietnam, or a space alien, or a film—anything but America actually murdering people in Central America. This is the case even though the film directly shows Dutch murdering people in Central America. One woman he helps capture even weeps when she learns he's survived at the end of the film, as if she can't remember that he assassinated dozens of her friends and colleagues. Dutch vanishes into his role as protagonist, his sins forgotten.

Dutch, looking at the alien, is looking at himself. He’s the Predator, secretly raining death on a distant, less well-armed people. But to be the Predator is to be invisible and, more than that, incomprehensible. This is not (only) because film cannot capture reality. It’s because the United States is determined to deny its own monstrosity, power, and presence. Dutch is a victim, first of the military brass, then of the nightmare monster that’s the jungle itself—Central America embodied. It isn't Dutch who kills from a distance, without compunction. It isn't Dutch who invisibly deals death and then packages that death as entertainment. It's just a science fiction story. It's not a real jungle, and there are no real predators stalking it. Predator isn't about Vietnam. It's about US involvement in Central America. It's just camouflaged so you can't see it.