Film Review: The Only Living Boy in New York Nearly a Complete Failure

A pretentious “protagonist” and dated references to “old New York” doom this semi-remake of The Graduate. 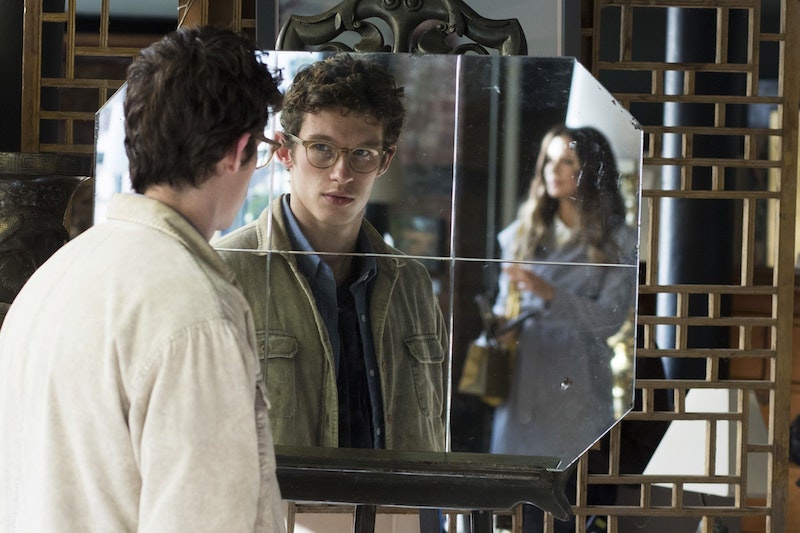 The Only Living Boy in New York is a nearly complete failure for small reasons and one big one. It’s a semi-remake of The Graduate that has nothing new or interesting to say. It’s a “coming of age” movie about a protagonist who’s 27. It’s got an attitude about New York City nostalgia that’s equal parts smug and older-than-dirt back-in-my-dayism.

But the worst thing about this film is that it’s got a protagonist who’s a downright loathsome character, and the script thinks that he’s charming, witty and brilliant. Worse, this entitled schmuck is played by an actor who’s incapable of conveying any level of emotion or reaction. I can’t remember when I’ve hated a movie’s protagonist more, or less impressed by a lead performance.

The film, directed by Marc Webb, does The Graduate set-up on the Upper West Side. Callum Turner (who resembles a discount version of Jesse Eisenberg) is Thomas Webb, the bored, aimless, college dropout son of wealthy Upper West Siders Pierce Brosnan and Cynthia Nixon. Stuck in the friendzone with a female peer (Kiersey Clemons), Thomas soon begins an affair with his father’s mistress (Kate Beckinsale), while also finding a mentor in his new neighbor, alcoholic novelist Jeff Bridges.

I’m not rejecting this narrative for woke reasons. This film does has that problem, but also a much bigger one—it shows us this boring, selfish, dolt, and has other characters repeatedly tell him that he’s brilliant, talented, “sweet” and “good.” At one point a character tells Thomas “I thought you were good,” when all we’ve seen him do up to that point is treat that person like crap. I also thought the notion in movies that stalking is the way to a woman’s heart died out in the late-1980s.

We’re not shown anything that establishes this character’s supposed talents or virtue, and it’s hard to imagine any reason why anyone would see this needy, unpleasant prig as a friend, romantic prospect or literary inspiration. But everyone else in the film does, even though just about everything out of this twit’s mouth is a “pearl of wisdom” that he’s regurgitated, usually verbatim from a previous scene. Plus, Benjamin Braddock had the excuse of having just graduated from college. Thomas looks like he’s well into the back half of his 20s.

There’s a late-in-the-game plot twist that’s legitimately surprising, and the scene in which a profound and erudite speech is delivered in the form of a drunken wedding toast (by character actor Bill Camp, never seen before or after) is so weird that it somehow works.

Everything else? Yeesh. There’s also this smug undercurrent in which older characters (played in one scene by the likes of Wallace Shawn) complain about how New York has changed. Not only does this have nothing to do with the rest of the movie, but the film’s script believes it’s a new and profound statement to point out that CBGB’s is closed and now there’s a Starbucks on every corner. This stuff was already clichéd and tiresome when I was first moved to New York, and that was 17 years ago.

The film hasn’t an iota of interest in the character arcs or inner lives of any of the three woman characters; it’s especially a waste of the immensely appealing Clemens, so great in 2015’s Dope. I kept rooting for her to escape this movie and find a better boyfriend. The film sets up high stakes for Nixon’s arc and doesn’t begin to deliver on them. As for Beckinsale, her character’s name is “Johanna,” for no reason other than so Bridges can reference the Dylan song “Visions of Johanna” three different times, before (of course) we hear the song itself.

The Only Living Boy in New York was written by schmaltz specialist Allan Loeb, who’s credited with writing or co-writing some of the very worst movies of the last 15 years (his lowlights include Just Go With It, Rock of Ages and Collateral Beauty). And while director Marc Webb has the same surname as the protagonist, Loeb’s voice is all over this one, and not for the better.

Webb directed 2009’s “(500) Days of Summer,” a film whose reputation hasn’t improved, though I loved it at the time and defend it still. He went on to make the two Andrew Garfield-starring “Amazing Spider-man” movies, and I remember thinking that Webb was ill-suited for blockbusters and should get back to making witty films about relationships. So much for that.

In keeping with The Graduate theme, The Only Living Boy in New York takes its name from a Simon & Garfunkel song, and of course features the song itself. It’s the worst of several movies in the last couple of years (Baby Driver, Obvious Child, The Boxer, etc.) that take their names from S&G or Simon solo songs. “The Only Living Boy,” according to lore, was written by Paul Simon at a time when he was mad at Art Garfunkel for leaving Simon in New York when he went to film a movie, although the song was used to great effect at the climax of the 2015 HBO version of Larry Kramer’s The Normal Heart. That’s because the lyrics, for this song about a forgotten folk duo feud in the 1960s, happened to line up perfectly with the theme of AIDS survival in the 1980s. How does it line up with the theme of some dead-eyed asshole in the present day? Not so well.

I’m not exactly sure what directors Ben and Joshua Safdie were trying to accomplish with Good Time, their dark and abrasive new crime film. Nor do I have any idea what the majority of my critics are thinking, praising this film to the skies. It’s an ugly, hideously shot picture with a droning, irritating score and a sickening visual style that’s particularly heavy on the shaky-cam and extreme close-ups. Robert Pattinson’s commanding lead performance is deserving of praise, but that’s about it.

The Safdies, best known for Daddy Longlegs and the 2014 heroin-centered drama Heaven Knows What, return to New York with a nihilistic would-be crime epic that resembles After Hours, if Scorsese had shot it from the inside of a toilet.

Pattinson and co-director Ben Safdie play Greek-American, grown-orphan brothers. In the first scene, Connie (Pattinson) grabs his mentally handicapped brother Nick (Safdie) from a therapy session and drags him along to a bank robbery. Things don’t go as planned, and Connie spends the rest of the movie carrying out doomed schemes and doubling down on those for even more doomed schemes. The plot barrels forward over the course of a single night, with the characters moving through hospitals, apartment complexes and third-rate amusement parks in Queens, and everything has an air of pathetic desperation. It’s a gritty story, told in a gritty manner. I don’t see how that makes it compelling.

Pattinson gives a compelling lead performance, while Ben Safdie is passable as the brother. Jennifer Jason Leigh, who’s gone from years of obscurity to a sudden run of outstanding roles in everything from Hateful Eight to Netflix’s Atypical to the Twin Peaks revival, has the first dud role of her comeback, as Connie’s girlfriend. Barkhad Abdi, from Captain Phillips, has a small part as a security guard; the least believable moment of the film is the notion that Robert Pattinson and Barkhad Abdi wear the same shirt size.

England Is Mine Is for Morrissey Obsessives. B

England Is Mine is a biopic of Morrissey, featuring none of his original music and ending right before his greatest moment of fame. It’s okay, but I’d much rather watch a film about the singer’s more prominent years, both in the Smiths and after, with full music included. Directed by Mark Gill, and starring Dunkirk actor Jack Lowden in the title role, England Is Mine shows us Morrissey’s early years, telling a coming-of-age story in a relatively generic way, and not giving us any particular insight into how this boy grew up to be the Pope of Mope.