The Circle, an adaptation of Dave Eggers’ thrilling novel, is a jumbled mess. 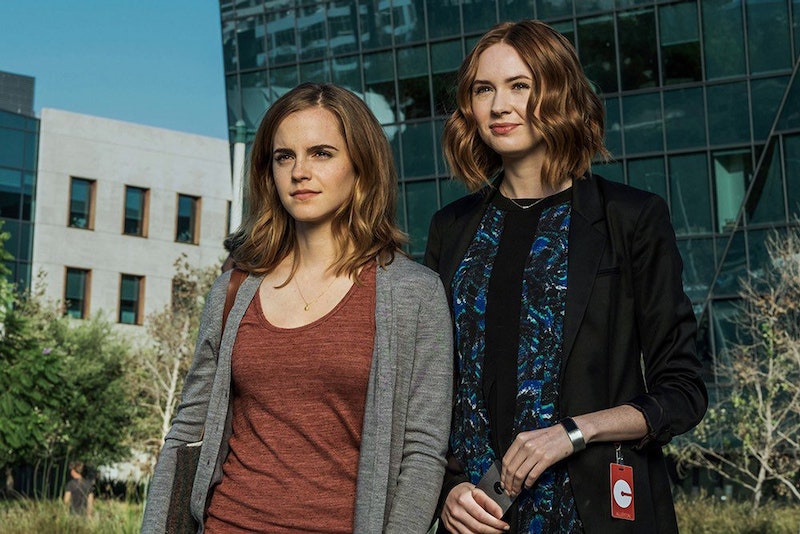 The Circle is currently saddled with an 18 percent Rotten Tomatoes score. James Ponsoldt’s adaptation of Dave Eggers’ novel is a missed opportunity, wrecked by an awkward and clunky script and jarring editing. It was shot in 2015, with re-shoots just a couple of months ago. More than anything, The Circle got scooped by “Nosedive,” the first episode of Black Mirror’s third season that aired last fall. Despite the fact that Uber already uses a mutual rating system for drivers and riders, I think we’re at least 20 or 25 years away from the glowing pastel rictus smile dystopia of “Nosedive,” where Bryce Dallas Howard’s character sits down for a cookie and coffee, takes a bite out of the cookie, grotesquely regurgitates it into a napkin, and then takes a perfect picture of a beautiful looking plate, and the likes, faves, and the hearts come pouring in. The environments and the insane conformity of “Nosedive”’s inhabitants suggest a world far removed from ours, with practically no one left alive that remembers living without social media. Their fascist rating system, used in every interaction, no matter how trivial, is a far cry from whatever Uber is up to.

When I read The Circle in 2013, it was terrifying because its world seemed right around the corner. Mae Holland, played by Emma Watson in the movie, is a frustrated young woman stuck with a shit job and no health insurance for her aging parents. Her father, played by Bill Paxton in his last film role, has multiple sclerosis, and when Mae’s given an opportunity to interview at the prestigious Circle company by her best friend Annie, she’s thrilled, gushing on her first day that her biggest fear is “unfulfilled potential.” Unfortunately, the movie lets talent slip by, molting and unused. Besides the lousy script (which Eggers has a credit on), the dysfunctional editing and incomprehensibly compressed story renders The Circle a boring failure for anyone that isn’t familiar with Eggers’ book.

A brilliant bit from the novel that was cut from the movie is when Mae gives a keynote speech before the entire Circle company and walks off to rapturous applause and rave reviews—they come streaming in on her phone, tablet, and five computer screens. But out of thousands of smiles and thumbs up, there are a few frowns, with no explanation. She’s driven mad by the few people that disliked her speech and is determined to find out why they would do that to her, besmirch her perfect rating, and for what possible reason. Any performer recognizes that feeling—you’re playing to a room of sweaty and excited bodies, but you can’t take your eye off the person in the back talking or scrolling mindlessly on their phone. Social media has made everyone a performer, and it comes with the same ridiculous insecurities. I’m not a fan of Eggers otherwise—the hyper sincerity and double reverse self-deprecation of A Heartbreaking Work of Staggering Genius is still infecting fiction and the NPR set—but The Circle is a gem, closer to Philip K. Dick than Deepak Chopra. His excursions into Africa and the Middle East are suspect at best (though I loved What is the What, he was merely transcribing Valentino Achak Deng’s harrowing and violent life story), but he nails the Stepford Wives vibe of Silicon Valley culture and its logical conclusions. Eggers’ name is anti-gravitational for a lot of people, so I implore you to read The Circle especially if you can’t stand McSweeney’s or anything else he’s done.

I agree with Matt Zoller Seitz that “This is one of those movies that has nothing and everything wrong with it. It's frustrating in a singular way.” It’s an especially frustrating movie if you’ve read Eggers’ book and loved its slow creep toward a quiet horror—the book ends with Mae Holland stroking her friend Annie’s hair as she lies in a coma, a near vegetable. As Mae contemplates Annie’s blank stare, she becomes infuriated that she cannot access Annie’s thoughts: she’s not being transparent. The last paragraph is chilling: “Another burst of color appeared on the screen monitoring the workings of Annie’s mind. Mae reached out to touch her forehead, marveling at the distance this flesh put between them. What was going on in that head of hers? It was exasperating, really, Mae thought, not knowing. It was an affront, a deprivation, to herself and to the world. She would bring this up with Stenton and Bailey, with the Gang of 40, at the earliest opportunity. They needed to talk about Annie, the thoughts she was thinking. Why shouldn’t they know them? The world deserved nothing less and would not wait.”

It’s very difficult to portray interior monologue on screen, especially when the narrator’s very gradual descent into a robotic Silicon Valley ghoul is the main source of horror in the book. The faux-happy ending where Mae screws over her bosses by leaking their emails to their entire world makes no sense, and the last shot of Mae rushing out of the Circle’s main auditorium followed by her fellow employees, ready to explore the world with total transparency, feels like a lifeless car commercial. It’s a shame that a book with such an interesting and unsettling atmosphere has been adapted with so little thought.