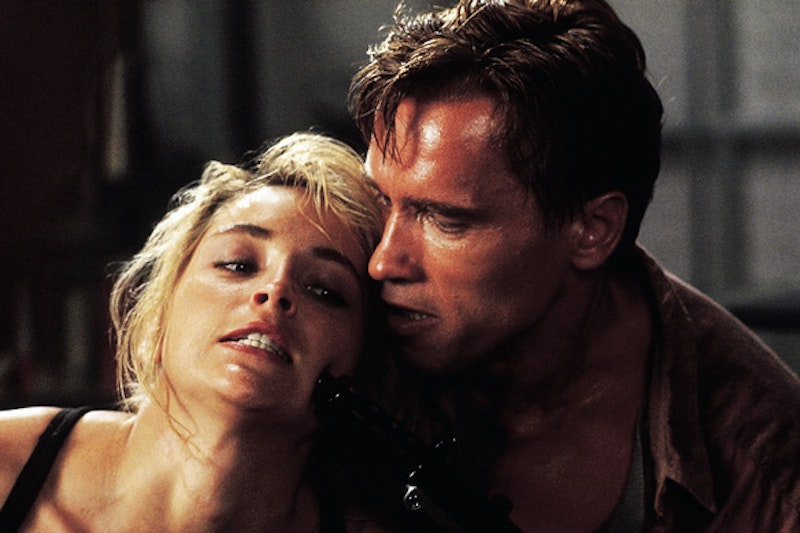 This is part of a series on fascism in film. The last post, on The Promise, is here.

Of Paul Verhoeven's three classic big-budget sci-fi features, Total Recall (1990) is the least concerned with fascism. Robocop (1987) is about a crime-riddled future and the cop who cleanses it; Starship Troopers (1997) is about a militaristic human race that engages in destructive space battle with frightened and doomed alien bugs. In both films, Verhoeven puts you on the side of the authoritarians crushing the resistance. He sneeringly, or winkingly, makes you the fascist.

Total Recall seems, initially, to be much less tricky. The hero in this case, Douglas Quaid, played with surprisingly convincing naïveté by Arnold Schwarzenegger, isn't a fascist. He's a construction worker who fights for the rights of marginalized mutants and sex workers on Mars. The bad guy is Vilos Cohaagen (Ronny Cox), the authoritarian dictator of Mars, who cheerfully murders in the name of preserving his control over the planet's extractive industries. You aren't supposed to identify with the fascist in Total Recall, but with the lone out-gunned dude fighting fascism. "Fascism is bad and good people like you, dear viewer hate it"; that's the straightforward message of a good percentage of mindless action films, and it's the message of Total Recall as well.

Or at least, it's one message. There are other possible ones, if you squint a little. Douglas Quaid, is not, after all, really Douglas Quaid. Quaid thinks he's a boring grunt who married his blonde, sexy, saccharinely supportive wife Lori (Sharon Stone) eight years back or so. Quaid's only distinguishing characteristic is an odd fascination with Mars. He goes to futuristic corporation Rekall to have memories of a trip to Mars implanted… but discovers he's already had his mind messed with. Quaid was formerly a man named Hauser, who worked as security for Cohaagen on Mars. Hauser betrayed Cohaagen and joined the resistance, so Cohaagen had his memory wiped. Quaid needs to get back to Mars, find the resistance, and defeat Cohaagan.

Except it turns out Hauser was always working for Cohaagan, and wiped his own mind to infiltrate and destroy the resistance. So Quaid is not a freedom fighter battling the dictator. He's an authoritarian asshole, a cheerful Gestapo spy. Quaid's a fascist without knowing it. Which means that, just as in Robocop and Starship Troopers, in identifying with the Verhoeven protagonist, you become a fascist too.

Total Recall, like Verhoeven’s entire trilogy, is obsessed with its own status as propaganda. Quaid watches advertisements for trips to Mars, staring at giant, wall-sized screens which assure viewers that the resistance on Mars is trivial, and excuse Cohaagan's use of draconian violence against. Media visions of Mars prompt the wide-eyed Quaid to alter his mind. Propaganda causes Quaid to embrace propaganda. He enters a dream prepared for him.

That dream is one of violent masculinity. Before Rekall gives him the Mars memories, they ask him what type of woman he prefers; he responds that he wants one who is demure and slutty. Sure enough, his adventure leads him to a sex worker/resistance fighter named Melina (Rachel Ticotin). It also gives him a chance to murder his perfect, carefully-calibrated-to-be-boring wife, Lori. Quaid early on whines to Lori about how he wants to do something purposeful and meaningful with his life; he's restless and finds his marriage unfulfilling. The miracle of propaganda allows him (and you!) to imagine himself as a man of action, stabbing effete scientists in the head and shooting his blah wife through the temple. Rekall promises that it’ll let Quaid be someone else, and so he becomes someone else—just as Hollywood films promise their viewers the chance to be someone more muscular, more violent, more viciously, virtuously manly.

Again, the vicious, virtuous manliness is in the name of anti-fascism—supposedly. But how different are Hauser and Quaid, really? Quaid kills numerous innocent people on his quest; in one particularly memorable sequence he blows a hole through a dome on Mars while trying to get through customs, and a bunch of unwitting travelers get sucked out to die horribly of asphyxiation. Cohaagan promises to brainwash Melina and make her soft and supportive, "like a woman should be," as a kind of gift to Hauser. But Melina is, in the film, explicitly presented as a gift for Quaid; she's his dream girl, in part because she's demure and defers to him. What Hauser wants is what Quaid wants—control, mastery, power.

The point here isn't that fighting fascism makes you a fascist. In Hollywood, dreams of fighting fascism are often uncomfortably couched in fascist idioms of unrestrained violence and vaunting Aryan masculinity. As just one recent example, Captain America: Civil War presents its blond protagonist (Chris Evans) with a choice—submit to the one world authority of the UN or go it alone as a battling vigilante. Cap is supposed to stand for freedom and liberty. But standing for freedom and liberty in this case means forswearing the administrative shilly-shallying and democratic process of the international order. The lone hero fighting for justice casually picks up populist right-wing tropes about effete ineffectuality and corruption of democratic norms and institutions. Is that Quaid under the Captain America cowl, or is it Hauser? How can you tell the difference?

"You are what you do. A man is defined by his actions, not his memory," a mutant seer tells Quaid. It's boilerplate Hollywood guru gibberish, and also, in the context of the story, completely untrue, since Quaid is completely different depending on what he remembers. But the pro forma philosophical privileging of action and doing is a hallmark of fascist propaganda, which presents the bored, restless volk with dreams of power, energy, motion, and death. When you're fantasizing about action, you can be made to do anything. The anti-fascist part of Total Recall isn't the anti-authoritarian plot, but uneasiness about the true self, and the crawling suspicion that there might not be one. Quaid doesn't know what he's capable of. Fascists rely on the fact that no one does, given the right story.