The Promise and remembering Armenian genocide. 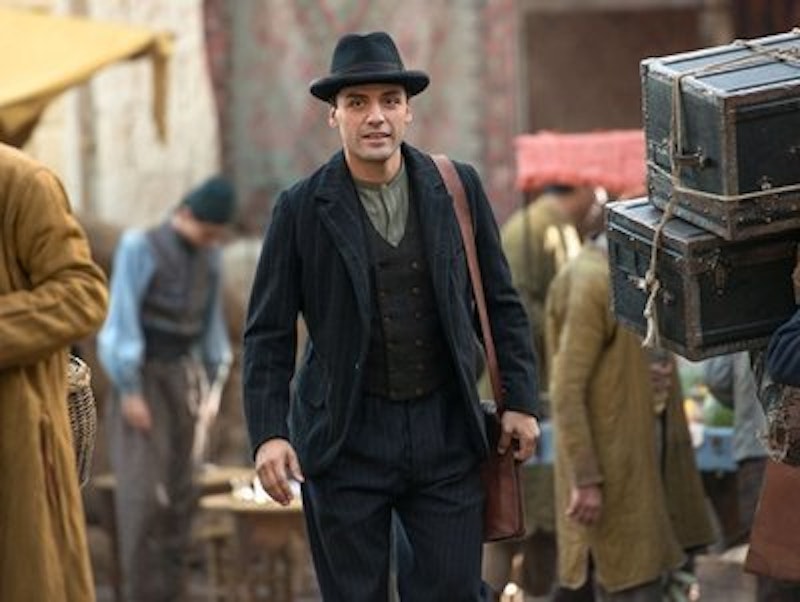 This is part of a series on fascism in film. The last entry on The White Hotel is here.

"Never forget." It's a commandment that’s become inseparably linked to the Holocaust, and is meant to serve both as memorial and vaccination. To prevent genocide we must remember and acknowledge its horrors. Holocaust deniers try to erase the memory of what Hitler did because by doing so they lay the groundwork to once again see destruction of the Jews. To forget genocide is to start down the path to future genocide. Memory can serve to block atrocity. Or so we hope.

The Promise is actuated by that hope. Directed by Terry George and released last week, the film is the first big-budget, wide-release Hollywood treatment of the 1915 Armenian genocide. After the start of World War I, the Ottoman Empire began a systematic program of ethnic cleansing, forcibly removing Armenians from their homes. Around 1.5 million people died, either from the forced marches or via mass executions. To this day, Turkey continues to deny the genocide occurred.

The facts of the genocide aren't common knowledge in the United States, and The Promise works hard to educate its audience about the extent and mechanics of the violence. The protagonist, medical student Mikael (Oscar Isaac) conveniently whisks about the country. He witnesses street violence and forced conscription in Constantinople, is sent off to slave labor on the railroads, and escapes back to his village only to be caught up in the Turks' program of forced removal and mass execution in the countryside. Finally he’s evacuated along with thousands of other Armenians by the French at Musa Dagh, one of the most dramatic events of the genocide.

The Musa Dagh evacuation, in this fictionalized telling, is in part facilitated by Chris Myers (Christian Bale). Myers is an American journalist whose courageous reporting from the front lines helps publicize the genocide around the world. Within the plot, Myers serves as Mikael's romantic rival; both are in love with Ana (Charlotte Le Bon), an Armenian woman raised in Paris. Chris is the point of entry for American audiences. He’s an outsider who loves the Armenians (and one Armenian in particular) and serves as a witness—not to mention as an advocate for intervention. He is the cue to an American audience, letting them know what they should feel, and how they should act. His presence is an embodied, "Never forget."

Chris isn't the only American who stands up for Armenians in the film. In a dramatic scene, the American ambassador at Constantinople confronts a Turkish official and accuses his government of atrocities. During the conversation, it turns out that the American ambassador is Jewish. In 1915, the Holocaust obviously hadn’t yet occurred. But by having a Jew speak up for Armenians, The Promise links the two genocides, and positions Jews and Armenians as allies. The ambassador’s religion adds authority to his passionate claim that America stands for oppressed people everywhere. Americans, the scene insists, are good people. They stood against the Holocaust. They stood against the Armenian genocide. They never forget.

This is an inspiring stance. It's also, at best, a whitewashing of the truth. Americans were very reluctant to take steps to help Jews fleeing the Holocaust, as the film Voyage of the Damned painfully chronicles. Nor did Americans intervene in the Armenian genocide in any substantive way. In fact, because of Turkey's strategic importance, the United States still has not officially acknowledged the Armenian genocide. Neither has Israel. The reason there has been no major Hollywood films about the genocide is because Turkey's influence has made funding difficult. Americans and Jews should bear witness to the Armenian genocide, and ally themselves with the Armenian people, as The Promise says. But in historical fact… well.

Maybe this selective forgetting is necessary to remember. The Promise flatters Americans by showing them an idealized vision of themselves. If we’re going to stand against genocide, fascism, and ethnic cleansing, we need a vision of ourselves doing just that. Being told that we are better makes us better. To care about Armenia, Americans need examples of Americans caring about Armenia.

Still, a half-truth is a half-truth—and encouraging Americans to lie to themselves has downsides. What happens when Americans believe, despite the historical record, that they’re an exceptionally moral people, who always help the downtrodden anywhere in the world? It's easy for the US to feel good about bombing Syria or Afghanistan in part because Americans already think that America is virtuous. The sunny vision of Mikael emigrating to the United States at the end of the film may be a spur to Americans to welcome refugees. But it could also assure Americans that they've been welcoming enough in the past, and don't really need to do more. Praising the United States for its goodness could also lead to complacency—and unwillingness to recognize our present violence and prejudice.

The Promise is a heartfelt film with noble ambitions. It wants to teach an American audience about a terrible genocide, and to bring that genocide into popular memory so that it’s not forgotten or repeated. But you can't remember by forgetting. America has not always cared about the marginalized and oppressed. It certainly hasn't always cared about Armenians.