The Vigil, the directorial debut of Keith Thomas, is fine Hasidic haunted house horror film. B 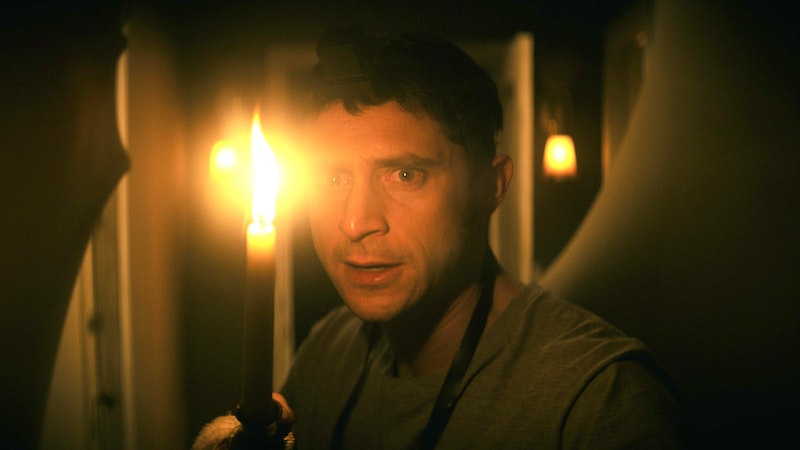 Much like how Miami Vice came about when one executive handed another a napkin on which he'd written "MTV cops," I imagine the new horror movie The Vigil happened in a similar manner, except the napkin said "Hasidic haunted house."

The Vigil, the directorial debut of Keith Thomas, arrives this week from IFC Midnight and Blumhouse, after sitting on the shelf since its Toronto Film Festival debut in 2019. It's structured like a standard horror movie in the Blumhouse tradition, except that it packs in a couple of millennia worth of Jewish folk mythology.

Dave Davis stars as Yakov, a 30-ish man who, following a family tragedy, appears to have broken with the ultra-Orthodox community in which he was raised. He'd just started to figure out cell phones, and has to Google "How to talk to women." It's implied that in addition to his religious changes, Yakov has battled some type of depression or mental illness.

Meeting with a group of other newly secular expats, Yakov is approached by a member of his former community, who asks him to return to Borough Park for the night, to sit "shomer" in the home of a recently deceased woman, a Holocaust survivor. It's part of the Jewish custom, not limited to the ultra-Orthodox, that a body cannot be unaccompanied for any amount of time between death and burial. He’s reluctant, but needs the money, and the person previously set for the job had begged off for mysterious reasons. The house remains occupied by the dead man’s widow (Lynn Cohen).

At the house, he runs into a supernatural creature—not a ghost, or a gollum, but rather a Mazzik. It’s a Jewish version of a "trickster"—a mythical creature of mischief, one who feeds on pain. If you're Jewish and you had Yiddish-speaking grandparents, they probably used to call you a "mazzik."

We're meant to ask, is Yakov being cosmically punished for his newfound secularism? Is he forced to confront and come to terms with the pain of the past? And how does his own trauma fit in with that of the Holocaust?

Lynn Cohen, the veteran actress who passed away in early 2020, is wonderfully haunting as the widow of the recently deceased, and the cast includes an all-star team of actors from famous Jewish projects: A Serious Man's Fred Melamed, Menashe's Menashe Lustig and Unorthodox's Malky Goodman. The actual scare scenes are fairly pedestrian by modern horror standards, but I liked the way the film weaves in Jewish iconography, much the way the genre usually deploys Catholic stuff instead.

I liked the movie, but would like to see a different movie, or even a sitcom, inspired by the first 20 minutes. This movie or show would follow the adventures of a support group of very recently secularized ex-Hasids, and their clueless adventures in a different part of Brooklyn.