Tim Story (Shaft, Ride Along, Think Like a Man) succeeds with Tom & Jerry, a movie aimed at kids. B+ 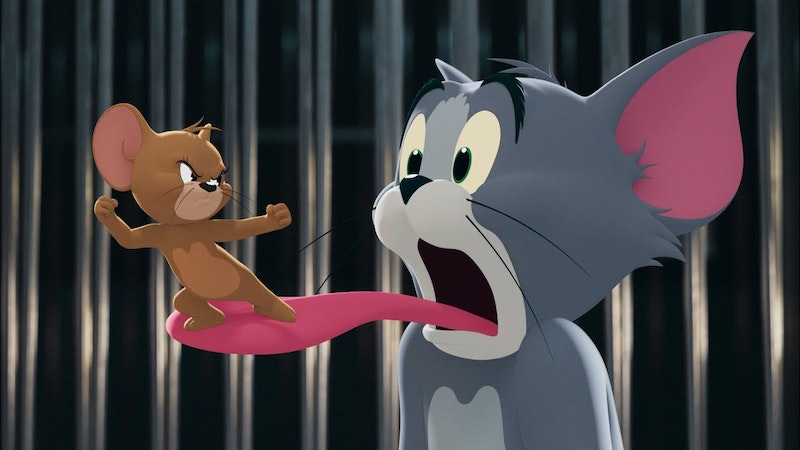 The new Tom & Jerry movie has no business being good. As this is the umpteenth adaptation featuring the warring duo that's been around since the first Hanna-Barbera cartoons in 1940, you'd think there wouldn't be much more to do with them. Tom and Jerry are a cartoon cat and mouse who fight a lot, often maiming one another, although they always recover instantly. This formula—parodied by The Simpsons' Itchy and Scratchy for the last 30+ years—has held up for more than eight decades, but it's not something that can sustain a 100-minute movie.

Leave it to director Tim Story to come up with a glorious way to bring Tom and Jerry into the modern world. It's a live action/animation hybrid format, with a New York City setting, very funny people in all of the major human roles, and (perhaps most importantly) clear rules about how this universe works.

Those rules are that the world is live action, but the animals are animated. Most of the animals can't talk, but a few can. None of the humans think it’s unusual for, say, a cat to play the keyboard in Central Park. But the sort of mayhem that happens when cats, mice, dogs, and other animals get into massive brawls? That they mind. The film is set mostly in a fancy, Plaza-like hotel near Central Park, preparing to host the wedding of an influencer couple (SNL's Colin Jost and Bollywood star Pallavi Sharda).

Kayla (Chloe Moretz) has bullshitted her way into a job supervising the wedding, putting her at odds with the hotel's events honcho (Michael Pena), for the favor of the hotel's owner (comedian Rob Delaney). This nutty workplace drama is occasionally disrupted by Tom and Jerry's antics, as well as a coterie of birds who pop up to sing 1990s hip-hop classics.

This has long been a knock on Space Jam, in that the Looney Tunes characters take a backseat to Michael Jordan and the other humans. But while Tom and Jerry don't drive the plot, the movie lets them shine, as their fight scenes are hilarious. Of the people in the cast, Moretz is the standout. She's proven an adept comedienne with outstanding timing. Another highlight is Patsy Ferran, a little-known Spanish actress with a winning energy, who plays an oddball bellhop. Jost is cast against type, as a guy who's generally decent and empathetic.

Tim Story directed multiple movies each in the Fantastic Four, Ride Along, and Think Like a Man franchises, and his last film was 2019's Shaft remake. That movie cast Samuel L. Jackson and his young sidekick in a semi-remake of the same director's Ride Along franchise, with most of the humor centered on an older guy calling a younger guy a pussy for 90 minutes. So Story’s an odd choice to direct a movie that's mostly aimed at kids. But despite that, the 2021 Tom and Jerry movie is very good.